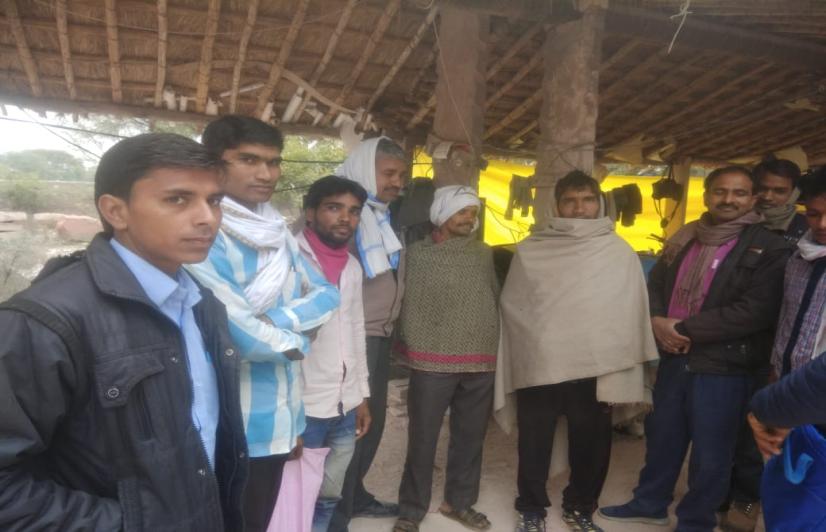 The problem with silicosis is that even though it is an old occupational hazard, misdiagnosis remains a threat to its treatment.

Hindustan Times reported in 2017 that in last five years, 14,064 mines had been inspected in India, out of which 3,076 were found to have violated the regulations. Notices were issued to 998 and prohibitory orders were issued against 847.

He further stated that there is a big network of agents, who reach wherever they find silicosis patients and ask for Rs 10,000-15,000 from them for help in getting government aid.

“Labourers are provided masks. From the government, there is pension for widows, but not everyone is getting it,” he added

“We get stone grinders that use water, as they prevent release of dust and help it to settle down quickly; but these haven’t been too successful. They work for two-three days and burn out; I have to then spend Rs 700 for maintenance every time. Even if we purchase grinders with warranty, we get a replacement for the first mishap but nothing second time onwards,” said Hansraj, a Sikandra-based factory owner.

There are rules //a labour lawyer will be able to tell what exact laws are in place and what kind of violations happen at these factories// in place for employers to assign a particular uniform and equipment to the workforce frequently exposed to silica dust.

Rajasthan has a high number of mine workers — more than 1.65 million families work in its stone quarries and mines for meagre wages.

Labour minister Tikaram Jully was asked if he is aware about workers’ pitiable conditions and if any measures have been taken to bring the situation under control. His reply makes the issue worse: “We were not aware the situation was this bad. Now that you are telling me, we will get to the bottom of it and try and find a way out. If labourers’ families directly contact the ministry, we will make sure they don’t get cheated of the assured compensation.” //this is so absurd...feels like that should be acknowledged..maybe ask our social activist what he thinks of this statement?//

Furthermore, Mamta Bhupesh, minister of Women and Child Welfare, Government of Rajasthan had promised several facilities to silicosis patients and affected families. However, nothing has been done so far in the matter. Numerous attempts for a comment from her elicited no response.

Aid to Silicosis patients had found a place in the 2018 state election manifesto of INC, whereby, they had promised to include labourers/workers suffering from Silicosis in the disability category.

Government adds silence to its apathy

Lakshminarayan, a Silicosis patient, claims to being charged Rs 10,000-15,000 from the ‘agents’, which he is in no condition to pay.

“I have been suffering from this disease for two years and have been running to government offices to claim aid. But in the absence of a fair system, and because of agents, I fail every time. I feel hopeless now,” Bhagirath said.

“To avail the relief, one needs to submit Aadhaar card and Bhamashah card //when was this started and was this started specifically with silicosis in mind?- every scheme and benefit has been linked to Aadhar and Bhamashah now/. (Bhamashah is a state-based direct benefit transfer scheme under which health insurance and medical treatment facilities are provided to the beneficiaries.) Then, a form has to be filled and a card is given to the patient to avail the amount. But agents meddle and ask for money for the card. Some doctors, too, are hand in glove with these agents and ask for as much as Rs 30,000 to give the card. In Jaipur and other cities, agents ask for Rs 2,000-5,000 extra to put up the card online through the state government’s E-mitra portal,” said a Silicosis patient who requested anonymity.

Several residents have taken the advantage of the complicated procedure and act as ‘agents’ or middlemen to get the money sanctioned. They then dope the patients and families by charging heavy fees for the same.

Menace of the middlemen

Dr Mukesh Sirowa, TB medical officer, further explained that a reference card is made for the patient. The patient appears before the doctors’ board through the card. The approval is given after the silicosis diagnosis is positive.

“Patients need to apply on the website of LDMS(Labour Department Management System, Govt of Rajasthan); the entire process is online. Once the form is processed, Rs 2 lakh will be given to the patients and Rs 3 lakh to the families of the deceased. Provision of compensation is entirely the government’s lookout. We only help in getting the cards made,” said Aruna Sharma, labour officer, Jhunjhunu.

An application has to be filed by the patient/family in order to receive the compensation. The said application goes through levels of screening starting from the CHC level, followed by medical board, then nodal officer, and is finally approved by the district collector. The approved application is then considered as ‘registered’.

Once a person gets diagnosed with Silicosis while working, or dies due to the disease, Government of Rajasthan has to compensate the patient/family of patient with Rs 2 lakh and Rs 3 lakh in respective cases through Silicosis Grant.

The CAG report of the state government, which it tabled in the Rajasthan assembly this year, states that 7,959 silicosis cases were detected between January 2015 and February 2017; in the same period, 449 people died of silicosis in five districts. The report adds that 2,548 silicosis-prone mining units existed in Rajasthan in 2017, but the exact number of mines is unknown as there is a large number of illegal mining units operational across the state.

““I have been doing stone work since 1997 and have been suffering from silicosis for the last five years. Currently, in and around Sikandra, 200 to 300 people are suffering from this disease, which has already killed 150-odd in Sikandra and, in the last four to five years, spread rapidly. Nearly 80% of the deceased were aged between 26 and 35 years,” said Amarsingh Saini, a 37-year-old Silicosis patient in Manpur village.

“The doctors always tell me they will call me after 10 minutes when I call them. I never receive a call back,” Deendayal said.

Deendayal Saini, a 28-year-old worker from Bhindarwara village has been suffering with persistent cough and breathlessness from last one year. He has been a stone carver from almost eight years and was also admitted to a hospital after being diagnosed with Tuberculosis. However, doctors have stopped addressing him now.

This is the story of every other household in the villages around Sikandra as stone carving is the major source of income for the residents.

“I have been trying to get the relief fund that I am entitled to after my husband expired. However, despite several applications, and huge sum of money given to the agents, I have not received my entitlement,” Saini said.

Saini, who lost her husband to Silicosis in 2017, has been diagnosed with the same. She, however, still works in a stone factory because she has three children to feed.

Jaipur: Basanti Saini, a 30-year-old widow in Sikandra, a small village in Dausa district of Rajasthan, wakes up every morning with breathlessness and a lump in her breast. She then goes to the same death hole that gave her the disease in hope to earn a livelihood.

“Silicosis has 10 stages and, if caught at the very first stage, it can be cured; any delay, however, worsens the situation. Also, sometimes, it’s misdiagnosed as TB, owing to their similar symptoms, and treated with TB medicines, which don’t help. What’s even more incredible is that at the time of diagnosis in government hospitals, workers are asked about their caste //why specifically caste?//, instead of occupation history; this results in delay from the doctors’ board to certify silicosis, as many still don’t know it’s a certified disease,” said Ranasen Gupta, a social activist.

He further stated that there aren’t enough oxygen tanks in hospitals, except in Jodhpur. This leads to patients being discharged at the last stage, when they need it the most, and eventually dying.

“There is no cure for silicosis. For prevention, masks for workers are a must, and employers must use equipment that uses water while grinding stones to minimize the spread of silica dust,” said Dr Devendra Saini, assistant professor, Sawai Mansingh College.