How internet ban in Kasganj affected press and police 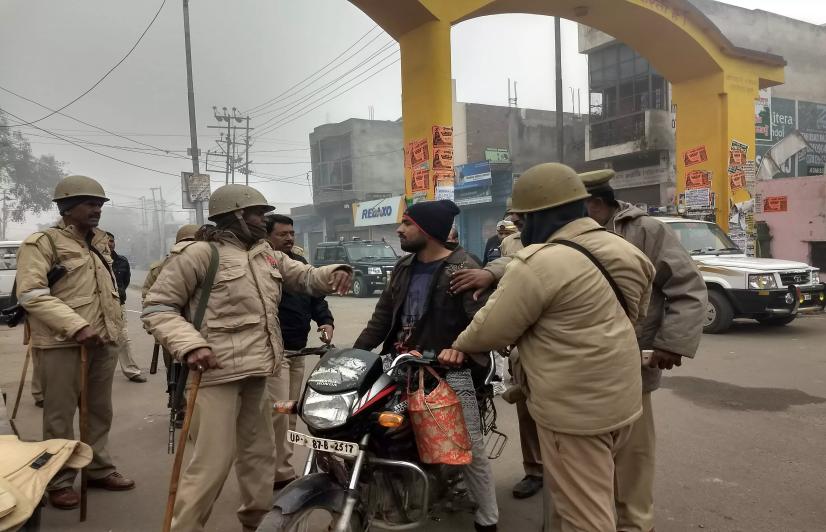 Agra, Uttar Pradesh: Reporting live from a conflict zone earlier this year, a reporter observed first-hand how suspension of internet to check rumour-mongering restricts government servants as well as media from going about their job.

Kasganj town in Uttar Pradesh's Aligarh division was in grip of violence and rioting after a Republic Day rally went wrong. A motorcycle rally of Hindu youth had ventured into a Muslim colony and provocative slogans were raised. In the chaos that ensued, a bullet was fired and a Hindu youth was killed. This had sparked arson and loot in the hitherto-unknown town.

When this Lucknow-based reporter reached Kasganj to report from there, messages fomenting communal trouble had already started floating on social media and messaging apps. As a precautionary measure, the district magistrate (DM) had snapped internet in the region on the night of January 27 so that no provocative messages were circulated to aggravate communal tension. Police vans patrolling the town's streets had announced as much a few times.

The same night, at a media briefing at his office, the DM Rakesh Singh appealed that people don't heed rumours that are circulating on social media and maintain peace and harmony.

Internet remained suspended in Kasganj for three days, starting from 10 pm on January 27. Even as the clampdown was enforced, incidents of vehicles and shops being set afire did not abate. In absence of WhatsApp, reporters' preferred communication tool, journalists had to rely on SMSes and phone calls to connect with each other to gather news.

To send their news report to their bureau, journalists in the trouble-torn town were frantically searching for households with broadband connection, since the internet ban was applicable only on cellular networks and not on broadband. Kasganj being a small town with its population barely exceeding a lakh, finding a broadband connection proved tough.

This reporter himself had to cross district border a few times to get access to internet so that he could send inputs to his newsroom. Since vehicles were not plying owing to violence, finding a ride was a task in itself. This reporter had to request police, anti-riot forces deployed there and a local leader to help with travel for work's sake.

BBC correspondent Sameeratmaj Mishra was one of the many journalists in Kasganj who found themselves high and dry owing to the internet ban.

"I was like a fish without water," he said as he recalled how he had to keep travelling to the adjoining district of Etah and back regularly to send inputs to his bureau. He recounted how this travel, necessitated by the internet ban, cost him on the reporting front. He said he couldn't cover some major developments because he was in Etah at that time, sending inputs.

Considering all the vandalism that unfolded in Kasganj after the Republic Day clash, including in the days following internet ban, Mishra opined that internet ban did not work.

'Ban was needed'
The DM disagrees with this verdict. He told this reporter snapping internet was necessary to control the situation. He claimed that the move helped them defuse tension and check violence from spiralling out of control.

"Every time the relaxation [on internet ban] was given, we got to know that someone torched a small shop, vehicles or whatever these anti-social, notorious elements found, which not just increased tension in the area but also hate among both the communities. The hate messages circulating on social media added fuel to the fire and controlling this was very necessary," he said, conceding that the ban affected the officers too.

Circle offices BS Veer Kumar, who was escorting the DM in Kasganj during the riots, was one of those who suffered the most owing to internet suspension as he had to bring the printed copy of orders that were coming from the Lucknow state headquarters.

"You have seen how I was bringing the printed copies of the order after travelling to Mirhachi in Etah district, which is almost 40 kms from the city headquarters. The broadband connection available at the district magistrate office was of no use and such a travel was real pain. I was getting phone calls from people, seniors, sub-ordinates and whom not! But I was assigned for this duty so I had to do," he said.

(Everything else was fine but then the family members were also worried for me and they were calling me regularly. Usually, I send my pictures on WhatsApp but on that day I had to answer their calls every single time they called me.)

Snapping mobile internet affected not only journalists and policemen on duty, but also the students and young professionals in the town, who rely on internet for many daily activities.