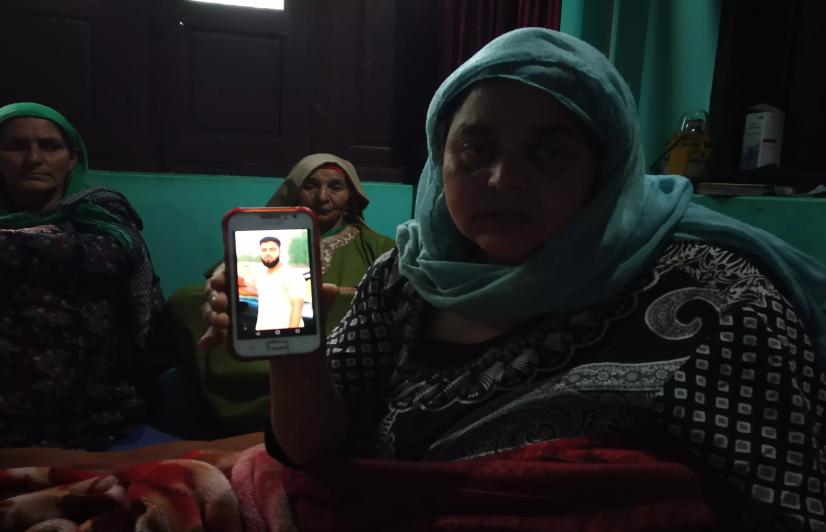 Jammu and Kashmir: Echoes of “I want my son Faisal to return” reverberates at Naibasti area of South Kashmir’s Anantnag district where 45-years-old Neelofar Akhter tells everyone, “I cannot bear this separation. I will die without him.”

Neelofar’s 19-year-old son Faisal Nazir Mir stepped outside to go to the market in the morning of April 19 and didn’t return. Before going to the market, Neelofar said, Faisal had asked her to prepare tea. “Afterwards, I called Faisal, and when picked up his phone, I asked him to come home and take his tea,” narrated Neelofar. “When he didn’t return I called him again after 15 minutes, but his phone was switched off.”

After repeated calls, she went to look for him, but nobody had seen him. Back home, Neelofar informed her husband Nizar Ahmad Mir, who works at the Jammu and Kashmir police department. Worrying about Faisal, the family called their relatives and Faisal’s friends, but nobody had any information about him. They filed a missing report at the police station where the police assured Neelofar that her son would be traced.

A few days later, a picture of Faisal brandishing AK-47 rifle went viral on social media. He had joined Jaish-e-Muhammad (JeM), the militant outfit responsible for the Pulwama suicide attack in which 40 Central Reserve Police Force personnel were killed on February 14 this year.

“We were astonished when we saw our son holding AK-47,” said Neelofar while adding that he had never shown any inclination towards militant activities. After Faisal’s picture surfaced, his family pleaded him to return through a video message uploaded on social media. Faisal was pursuing a diploma course in electronics at Kites Polytechnic College in Srinagar and was waiting for his recently concluded semester examination.

The family has recorded and circulated scores of videos with a hope that the videos might reach Faisal and he would return. In response to the family’s videos, an unverified audio message of Faisal was doing rounds on social media in which he refused to return and announced his decision to join militancy. “I am Faisal Nazir Mir. I have chosen the right path and will not leave it. Don’t live in a false dream that I will leave this path. We know who our enemies and friends are,” Faisal could be heard saying in the audio. “I belong to such an organisation that produced fidayeen like Adil Ahmad Dar, and I am walking on their path.”

Faisal, through audio, castigated the Indian media. “Just to gain TRP, Indian media is tarnishing our freedom struggle. This media will do no favour to us,” Faisal continued. “I request my family not to wait for me. I want to tell them I am fine. Just pray for me.”

The family says the audio of Faisal is not authentic. They say the voice in the audio message is not of Faisal’s.

Police have confirmed to 101Reporters that Faisal has joined militant forces while adding that he has no previous record of participating in any unlawful activity. When asked about the authenticity of the audio of Faisal, the police have said that they are checking its authenticity.

Since April scores of youth have gone missing in South Kashmir to join the militant forces. During the last couples of weeks, pictures of scores of youth holding AK-47 and announcing their decision to join militant outfits have gone viral on social media. Besides Faisal, Imran Yousuf Bhat of Pulwama, Mohammad Aslam Dar of Redwani, Kulgam and Rayees Ahmad Dar of Tral, Pulwama have joined the ultras. According to photographs, Imran and Rayees have joined JeM while Aslam has joined Hizb-ul-Mujahideen.

Just 11 kilometres away from Neelofar’s home, 40-year-old Atiqa Banu is lying on her bed since her son Danish Gulzar Bhat,18,  went missing.

On the evening of May 5, Atiqa said, Danish went to offer Maghrib prayers in the nearby mosque, and when Danish didn’t return within the time the family members tried calling him, but his phone was switched off. “I went to look for him at my brothers-in-law’s, but he was not there,” said Atiqa.

Danish, a resident of Jablipora, Bijbehara area of South Kashmir’s Anantnag district, was a student of Class 12 and was awaiting results for his recently concluded bi-annual examination. The family could not sleep that night, as everyone paced around the house waiting for news about Danish. “We continued our search until the next day. When we didn’t receive any information about Danish, we went to the police station and filed a missing report,” said Atiqa.

Unlike the other militants, Danish hasn’t taken to social media to announce if he has joined any militant outfit, but his family suspects that he might have joined the extremists.

In 2017, Danish was detained twice on charges of stone-pelting. He is the youngest son among three kids of Atiqa. His father, Gulzar Ahmad Bhat, is a government employee in the horticulture department.

Like Neelofar, Atiqa has pleaded to her son through a video uploaded on social media asking him to return. A cricket enthusiast, Danish had represented his school in cricket tournaments while winning multiple trophies in the process. “Danish is our last hope. I will die if Danish does not return,” said a teary-eyed Atiqa. The family has announced a reward of ten lakh rupees to the person who brings Danish back.

The police have said that investigation on the case of Danish is still ongoing. “Danish may have joined militancy, but we are still investigating. We will inform the family very soon about their son,” said a police official.

Since Faisal left, Neelofar keeps looking at her son’s picture while she is crying continuously. She is desperately waiting for her son to return while Atiqa looks towards the main entrance every time someone opens it as she feels her son Danish has come back home.