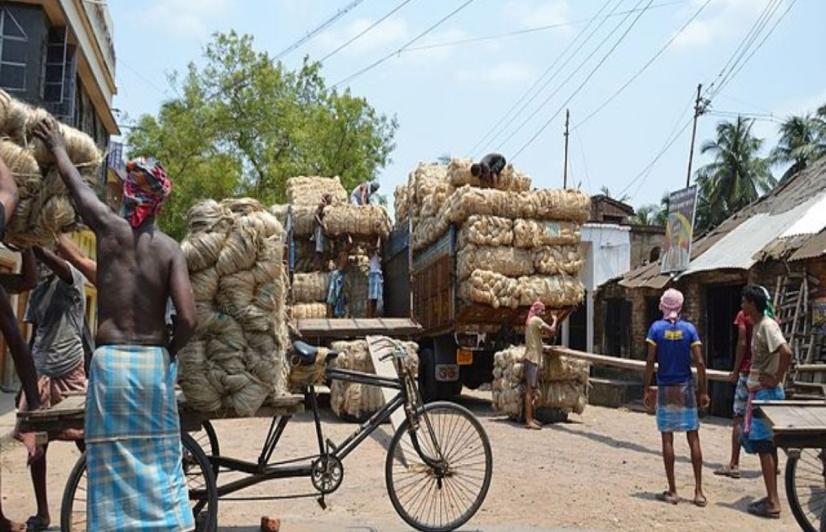 Since September last year, representatives of the jute industry have been appealing to the Centre to reconsider some of their decisions that have had alarming effects on their business

Kolkata: Kamal Shaw is a 44-year-old worker at Alliance Jute Mill in Jagatdal, in West Bengal’s North 24 Parganas district. He operates the heavy machinery that processes raw jute into yarn and cloth to manufacture the sacks used in the packaging industry. He earns between Rs 350-400 every day on the basis of the work he does.

Shaw is among over three lakh workers employed in the jute mills across West Bengal, most of which are located along the banks of the Hooghly River in the district of Howrah, Hooghly, and North 24 Parganas. In fact, of the 94 jute mills in India, 70 are in West Bengal. The state caters to nearly 66% of the country’s jute requirements, as well as around 80% of all its jute packaging needs. Annually, the centre and various agencies countrywide procure 10 to 12 lakh tons of jute bags worth Rs 5,500 crore to package food grains and sugar from this east Indian state.

As is evident, the jute industry is a major source of revenue and employment in West Bengal. Besides contributing Rs 6,500 crore to the state GDP, it has more than 40 lakh jute farmers involved in the business, in addition to the three lakh workers employed at the mills.

Like most other fields around the world, the pandemic had adverse effects on the once-thriving jute industry of Bengal.

“Around the fag end of the last season, around 13 to 14 mills closed down sporadically due to a scarcity of raw material,” said Raghavendra Gupta, chairman of the Indian Jute Mills Association (IJMA). “The lockdown was announced during the sowing season of March-April. And once restrictions were eased, a large part of our jute-growing areas were hit by Cyclone Amphan. Both took a major toll on the crop size.”

In 2020-21, the production of raw jute was a record low of 58 lakh bales, in a country where its consumption usually touches 85 lakh, Gupta said, adding, “There wasn’t any carryover at the beginning of 2021-22. Even though jute is a robust crop, we’re feeling the scarcity of the fibre without any carryover.”

With mills closed, workers like Shaw were left without a source of income. Though Shaw was fortunate that his wife, a school teacher, and his mother, a mid-day meal cook, retained their jobs during that time. Many weren’t as lucky.

The jute industry of West Bengal primarily supplies its produce to the government of India for food grain packaging. The price of these bags saw a corresponding rise with the spiking rates of raw material. As a result, the union government passed an order in September 2021 to cap the prices of raw jute and B-Twill (the gunny bags used to package food grains) at Rs 6,500 per quintal.

However, the market price of raw jute, as well as its price in Bangladesh, is around Rs 7,200 per quintal, which is why the “industry is forced to buy it at higher prices to keep the mills running”. Hence, the IJMA appealed to the government a number of times to review the price cap and increase it to Rs 7,200, “to allow for a situation where the mills would not lose money”, the IJMA chairman said.

When representatives of the association met Textile Minister Piyush Goyal on December 13, they were told that the government could not take their proposal into consideration. The IJMA also appealed to Prime Minister Narendra Modi in January.

“The scenario is extremely critical as we are not getting compensated for the prices at which we are purchasing jute for the bags. And as far as profitability is concerned, it’s a very difficult situation,” he added.

Somenath Shyam Ichini, the MLA from Jagatdal, a hotspot for jute mills, said that due to the wide gap between the sale and purchase rates, jute mill owners in the area weren’t interested in running their factories at the moment.

“One jute bag costs around Rs 65-75, whereas a plastic bag costs only Rs 21. The central government has allowed the use of plastic bags for sugar, so the [jute mill] owners say they don’t have orders. What would they do by making these products? The jute industry is deprived in many ways,” Ichini said.

He highlighted another problem — the shortage of labour: “Earlier, labourers from Bihar, Uttar Pradesh and Odisha used to come to work in the jute mills here because the salaries were high. But now, the mills run only for two shifts.”

Companies that manufacture jute products, too, have felt the effects of the pandemic. Pankaj Agarwal, marketing head of Ludlow Jute & Specialities Limited, said that due to the Covid-19 outbreak, their factory had remained closed for two months and ran at a lower capacity on reopening.

“Because of the pandemic, we lost a lot of our export and local business,” he said, adding that they had no help from the government in terms of policies. “We had to cope with the situation ourselves.”

In October 2020, the Cabinet Committee on Economic Affairs, chaired by the Prime Minister, approved a mandate of packaging of 100% of food grains and 20% of sugar in jute bags. Under the Jute Packaging Materials (Compulsory Use in Packing Commodities) Act 1987 (JPMA), the government is required to consider and provide for the compulsory use of jute packaging materials for supply. Under unusual circumstances, the central government can allow the use of plastic bags as an alternative for up to 30% of the total requirement for food grains.

Now, the fate of the 70 jute mills in West Bengal, which employ around 43 lakh people directly and indirectly, depends on the JPMA. But in November, a notification was issued on increasing the GST rates on jute products from 5% to 12%, worsening their plight.

“Jute is a biodegradable, environment-friendly product. We face stiff competition from synthetic substitutes because the upfront costs associated with jute production are higher. So we put forth a plea asking the union government to reconsider its decision to increase the GST on jute products, ” said Gupta.

While the situation on ground may be in dire straits, the global outlook for the jute industry looks rather positive. According to a recent report by Research and Markets, the global jute bag market was valued at $2.07 billion in 2020 and is projected to touch $3.1 billion by 2024, with consumers looking for alternatives to single-use plastic.

Ranajoy Bhattacharyya, an economics professor at the Indian Institute of Foreign Trade, asserted that there was “no immediate threat” to the production of jute goods, since it’s been stable over the past few years — though it has reduced rapidly in its influence over the past few decades.

Between April and December 2020-21, more than 20,000 million tonnes of raw jute worth Rs 120 crore was exported. And according to Gupta, the value of jute exports is an estimated Rs 2,000 crore annually, which roughly translates to 15 per cent of their turnover.

“The jute shopping bag segment of the industry is showing year-on-year growth,” he said on the future prospects of the industry. “It was disrupted due to the Covid-19 scenario, but it shows promise for the years to come.”

Although Bhattacharyya is optimistic about the “bright future” of the jute industry, thanks to its organic credentials, he cautioned against the “abysmal” innovation in the field, which he fears may lead to its eventual demise.

“As a result, cheaper versions of jute bags capable of replacing at least a part of the highly toxic plastic bags have not been created,” he said on the lack of research, development and innovation in the jute industry.