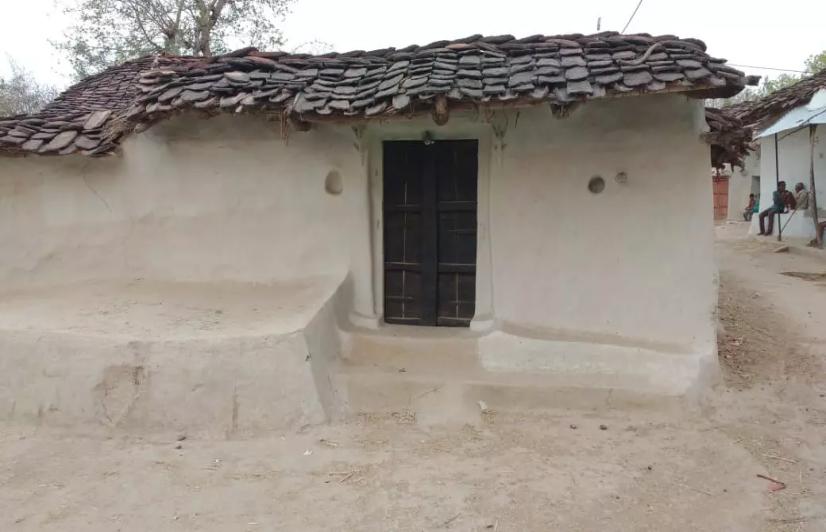 Chhatarpur, Madhya Pradesh: While walking past the lanes of Anandipur of Chhatarpur district of Madhya Pradesh, it is hard to miss the locks which adorn the door of houses made of mud and terracotta-tiled roofs. While the whole country participated in the festival of democracy, election fervour in the village was muted as half of the village was missing. Situated in the Bundelkhand region of the country, Anandipur is plagued with mass migration, as is the trend across villages across the region. Despite an extensive awareness programme carried out by poll authorities, the villagers who had come to the village for the harvest season returned without exercising their right to vote. They shared that their struggle for livelihood takes precedence over their democratic right to vote. The village voted during the fifth phase of the elections on May 6th under Tikamgarh Lok Sabha constituency and recorded a voter turnout of 66.47 percent.

Struggling with drought, Jagdish Ahirwar, a farmer, had to leave the village after harvesting wheat. His wife and two small children also accompanied him to find work. Another resident, Devendra Mishra, said that Jagdish knew of the polls taking place on May 6th, but due to the low yield of wheat, he wasn’t able to stay until the polling got over. “Every second house of this village is suffering from the curse of migration. Some people go for work with their whole family while some leave their parents in the village as they feel that they wouldn’t be able to face the hardships of daily life in the city,” Devendra added.

For poor residents of the village, migrating to cities doesn’t warrant a great lifestyle. Ram Narayan Rajput, who works as a construction labourer in Delhi, revealed that the living standard of labourers is abysmal. He pointed out that a small room is shared by a group of five to six people. “We do not have the luxury to take a bath every day. Female labourers suffer a lot due to lack of privacy. We can afford rented accommodation only if we can make Rs 1000 per day. That’s why I use to live alone in Delhi. My wife and children live with my parents in the village,” he added.

Ram Narayan had returned to Anandipur, about two months ago to harvest his crops while also hoping to cast his vote, but his contractor called him back to Delhi. He caught a train to the capital city within the next two days. He said that while voting is important, his work is a higher priority since his job with the contractor is at stake as he will be fired if he fails to report to the contractor. Ram Narayan has a family which consists of his two children, wife and parents. With his daily earning of Rs 400 to 450, he manages to save Rs 7000 every month and has to run back every time his contractor has a job for him.

Bundelkhand comprises of seven districts of Madhya Pradesh — Datia, Tikamgarh, Niwari, Chhatarpur, Panna, Sagar and Damoh. Niwari, a newly created district was separated from Tikamgarh district in 2018, faces the same ordeal of migration. Villagers of this district migrate to Haryana and Uttar Pradesh to find work. Jhumak Lal Ahirwar, a labourer who works at a construction site in Gurugram also came to the village to find a job during the harvesting season but only found disappointment due to the ongoing drought. He mentioned that he had to spend all his savings while also borrowing some amount of money from friends. As he was desperate for money, he left for Gurugram in Haryana, just two days before the elections were scheduled in the village.  When asked about missing his opportunity to vote, he told 101Reporters, “Poor people do not have any right as we would die if we worry about such things. I would love to work in my village, but there is no work available in my village or nearby town. Life is still difficult in Gurugram but better than Niwari.”

Every year more than 20 percent of the village population have to migrate to find work. While the consensus in rural areas is that labourers working in factories and construction sites have it easy, Mast Ram Ghosh, a resident of Niwari, said the opposite is true. He recounted how Bhagwan Das, a resident of the village, passed away after he was stuck in a threshing machine in Haryana.

“Bhagwan Das is just an example of how our villagers are doing dangerous work in other cities. We received half of his body. There are so many men and women of this village who never return. No one knows where they go,” he added.

The data shows that Madhya Pradesh is facing an acute problem of migration. 2.5 crore people have migrated from the state out of which 1.85 crore people are from rural areas. It should also be noted that only 11 lakh people migrated for less than a year.

The situation is not much different at Kota Gunjapur village in Panna district. Ram Vishal, a resident, said that two families from the village left with their whole family to work at a construction site in Haryana as they were facing huge losses from farming.

Even this year, the average voter turnout percentage of Bundelkhand region was low as compared to the state’s figure. Tikamgarh, Damoh and Khajuraho parliamentary constituency witnessed 66.47 percent, 65.82 percent and 68.12 percent respectively against the state average of 69.14 percent.

People who migrate from villages don’t get the chance to vote. Rolly Shivhare, the state coordinator of Association for Democratic Reforms, said that the labourers couldn’t afford the fare to come back to the village to vote and they usually don’t add their names registered in the city in which they reside, which prevents thousands of people from exercising their democratic right. “We have approached the Election Commission to schedule trains as the Railways does during festivals. The election is like the festival of democracy, and we should encourage migrants to participate in the festival,” she added.

Talking about challenges faced by the Election Commission in voter awareness work, Abhijeet Agarwal, Joint Chief Electoral Officer of Madhya Pradesh Election, said that they work with a special focus on migration-affected areas. He mentioned that the district administration looks after the matters of migration but during awareness campaigns, Election Commission tries to appeal to the workers to return on the day of polling. “We issued an appeal in Jhhabua about the same where people migrate to Gujarat for work. We do see some impact, and we try to create awareness by asking the voter to transfer their names to their current location voter list if returning is not possible for them,” Agarwal added.