Paddy Farmers in C'garh: Caught in the fire of political rivalry? 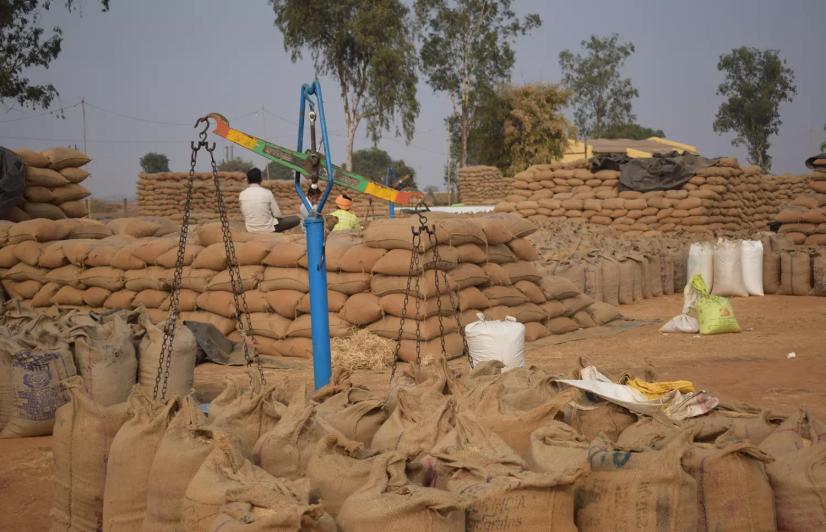 For 52-year-old Brijmohan Dewangan buying a motorcycle, while managing a family of six, remains a dream. Dewangan, a resident of Chhura village in Gariaband district of Chhattisgarh, had planned to buy a motorcycle with the money he would get from selling paddy crop this year. However, owing to untimely rains, the harvested paddy remained in the field.

The harvested crop under the open sky started rotting and as the grains turned black from the moisture, Dewangan came to know that the state government would be buying the paddy from December 1 at minimum support price (MSP). However, he is unsure of what the price would be owing to the ensuing battle between the state and central government on the MSP.

People like Brijmohan are countless in the ‘Rice Bowl of India’, where the paddy farmers are getting increasingly worried. Over 19 lakh farmers had registered to sell their produces at MSP in the current crop cycle, according to data from the state agriculture department. Before the Assembly elections in 2018, Congress had promised to buy paddy at the MSP of Rs 2,500. The central government buys about half of the rice released from the paddy that the state government buys from the farmers. However, distraught with the purchase of paddy at an increased price, the central government has reduced the quota for rice procurement this time.

Dewangan lamented the delay in the buying of the crops, which was supposed to start by November 15 but was extended to December 1 due to the disagreement between the state and Centre, and stated that unless the conflict is resolved, he will be in a lot of trouble.

Till last year, the Centre was buying 24 lakh metric tons of rice from Chhattisgarh, which the state government was demanding to increase to 32 lakh tons. However, instead of increasing the purchase quota, the central government has reduced it to 11 lakh tons.

After the Centre's refusal, the state is mulling over options to utilise the leftover paddy. Chief Minister Bhupesh Baghel, while addressing the media on November 17, revealed that plans to produce ethanol were discussed. He added that he has met the Union Minister for Petroleum & Natural Gas, Dharmendra Pradhan, and requested him to grant permission to produce ethanol for ten years.

Agricultural expert Dr Sanket Thakur stated that owing to the untimely and heavy rainfall in October, the farmers were bound to harvest the crop before time. Without storage facilities, the harvest is rotting in the fields for over a month while the farmer continues to amass great debts just to keep feeding his family.

He added that owing to the high-interest rates and the pressure to repay loans, farmers are selling paddy for as low as Rs 1,200 per quintal.

Sunil Bhaskar, 56, a paddy farmer from Abhanpur in Raipur district, who came to sell paddy at the government mandi situated at Pandri in Raipur, highlighted that due to the immediate want of money, he is selling the crop even after taking a loss as the government will start purchasing paddy at MSP only in December and even after that, the money will take time to be credited into his account.

Subhau Verma, 46, a paddy farmer from Arang area in Raipur district, stated that he has harvested his paddy crop, but owing to the lack of storage facilities, he has to sell it at a low price in the open market.

In 2013, after coming to power in the state, the Bharatiya Janata Party (BJP) had written to former prime minister Manmohan Singh demanding Rs 2,100 as the increased MSP, as promised by the BJP during the election campaign. At the time, the Centre had expressed its inability to offer the amount.

The 2018 election saw a similar promise by Congress flatly refused by the BJP in the Centre.

In a conversation with 101Reporters, CM Baghel stated that the anti-farmer face of the BJP is seen across the country. “BJP should clarify its opinion on the issue, whether it is in favour of purchasing paddy from the farmers of the state at a support price of Rs 2,500 or not. Secondly, when the central government had purchased paddy last year, why is it not being done now,” he argued.

He pointed out that he had written letters to the Centre, and the reply he received stated that the purchase of paddy for Rs 2,500 will upset the market, while he claims that it will boost the state economy.

He asserted that if the farmer becomes strong, then it’ll have a positive effect on the market and alleged that the BJP is retracting from its promise.

Several states in the country get their coal for the power plants from Chhattisgarh. In order to increase the pressure on the Centre, state Congress leaders are threatening to stop the supply of coal if their demands of purchasing paddy at MSP is not met.

State revenue minister Jai Singh Agrawal, at a press conference on November 12, hit out at the Centre and threatened to stop the supply of coal.

Before that, state Congress chief Mohan Markam on November 8 had indicated that the state government is trying to put pressure on the central government by talking about stopping the coal supply.

Congress is also preparing to hold a big demonstration in state capital Raipur with the farmers to demand the purchase of paddy for Rs 2,500 by the Centre. At the same time, Congress will also go to Delhi with the farmers to protest against the anti-farmer policies of the central government.

Farmer leader Anand Mishra, a member of Chhattisgarh Krishak Biradari, told 101Reporters that the PM Modi government had already promised to fix the MSP based on the recommendation of the Swaminathan Committee. However, he pointed out that the central government has not revised the prices in the state for six years. “Now if the central government is refusing to buy farmers' paddy from Chhattisgarh, then it is like committing fraud,” he stated.

Caught in the blame game, the state BJP leaders are attacking Congress for turning their back on their promise.

Former chief minister Raman Singh, while addressing the media on November 16, stated that the Congress had mentioned in the election manifesto that it would buy paddy for Rs 2,500 per quintal, but now the Congress is ignoring the issue. “Congress didn’t fix the MSP of paddy after the consultation with the Centre. In such a situation, if the central government has refused to buy paddy, then the state should purchase paddy from its resources,” he added.