In Malkangiri's tribal villages, every drop saved today is an investment for tomorrow 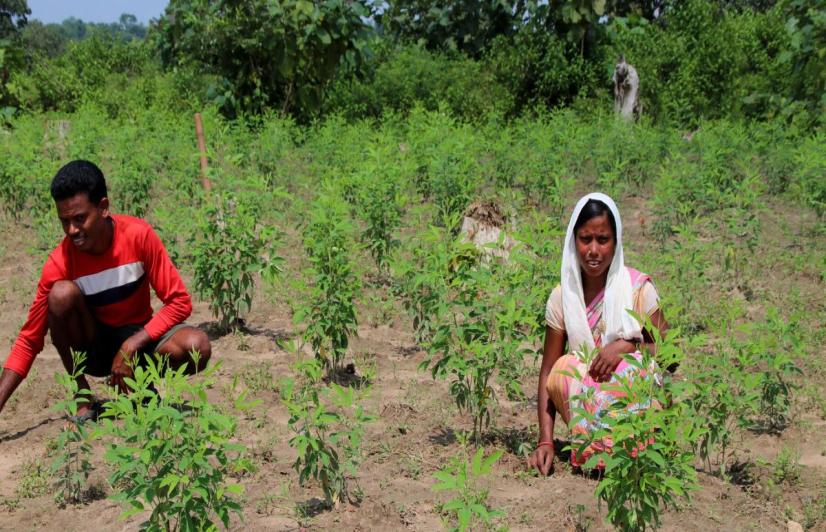 “All our crops were rainfed, but we still received good yields. We sold the surplus at local weekly markets, and bartered some for essential goods. However, climate change made things unpredictable,” said Dhanurjaya Khila of Kadamguda in Korkunda block.

Farmers started incurring losses due to erratic rainfall and prolonged dry spells. “We slowly lost faith in agriculture. Many migrated to Andhra Pradesh for work,” said Arjun Khila, another farmer.

Dhanurjaya and Arjun represent hundreds of thousands of farmers, who struggle to cope with the rising temperature, heavy rainfall, flash floods and landslides. 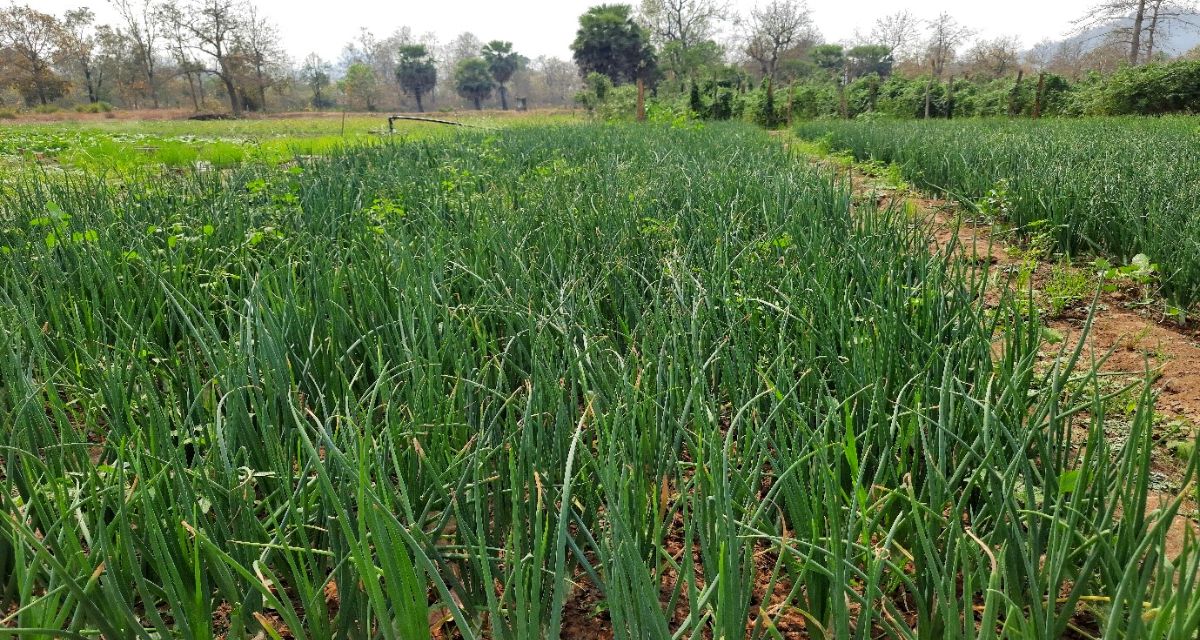 The micro-irrigation system provided water to 651 acres and benefited 295 tribal farmers spread across villages in Malkangiri district, Odisha (Photo: Abhijit Mohanty)
To strengthen farmers' resilience and livelihood security, the Department of Agriculture in collaboration with local civil societies such as Sisu O Mahila Kalyana Samiti (SOMKS) and Parivartan launched a community-driven micro-irrigation programme, supported under the Special Programme for Promotion of Integrated Farming (SPPIF), in 2019-20.
The system provided water to 651 acres and benefited 295 tribal farmers spread across Tekguda village in Khairput block, Chitapari III and Totaguda in Korkunda, and Potitang, Themrupali and Batriatal in Malkangiri block.
Channelling resources
Group discussions were organised with farmers to identify major water deficit areas. The agriculture department’s technical team comprising engineers and soil conservationists identified and marked certain areas in their farms that required irrigation.
“Based on our study, water deficit areas in farms were converted into water outlets,” said Soumya Ranjan Majhi, an engineer with SPPIF, Malkangiri. Each outlet covered three to five acres, to which water from natural streams was carried using pipeline distribution networks. Water was then redirected through drip irrigation to those areas where crops were cultivated. Earlier, people used to flood the entire farm, which led to wastage of water.
Also, a cadre of community resource persons in the role of pump-cum-valve operators was created. The village water user committee (VWUC) members appointed the operator for a monthly payment of Rs 2,000. One such operator, Jalandar Dalapati regularly inspects the functioning of motor and pipeline networks, and informs engineers if something is amiss. 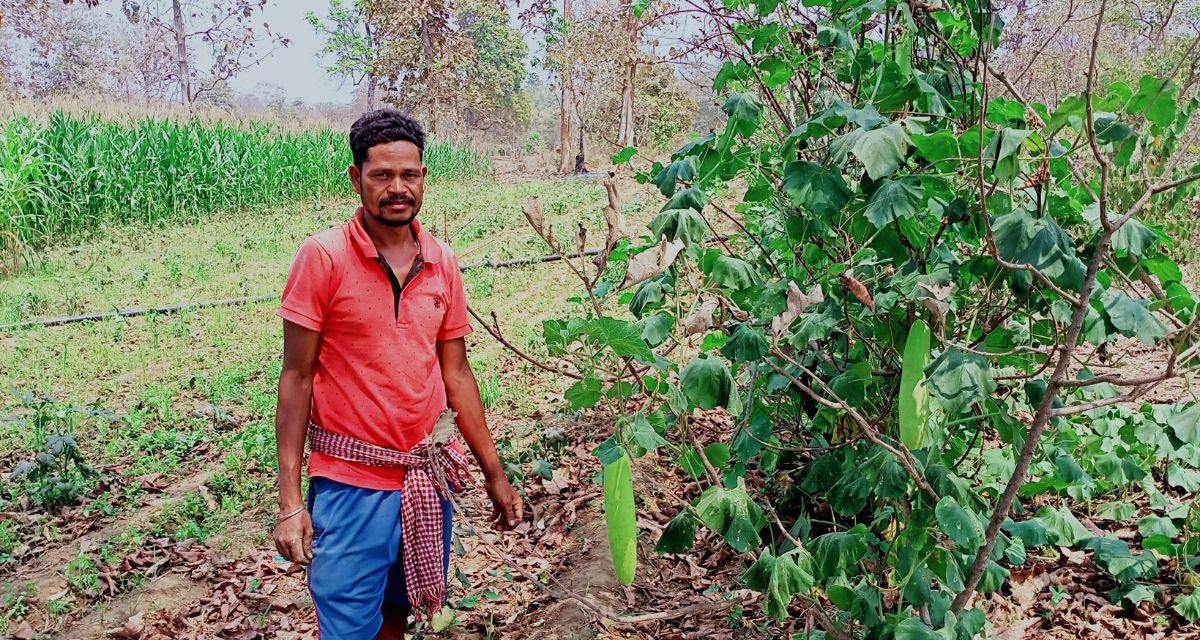 Farmers were looped in by the agriculture department officials to identify seeds with high yield potential and water resilience which suit the local terrain (Photo: Abhijit Mohanty)
“Every drop of water is precious. We have sensitised farmers not to over-irrigate. They mostly think it will spur plant growth, instead it leads to waterlogging, leaches away soil nutrients, and reduces soil fertility,” said Jagabandhu Hantal, pump-cum-valve operator in Totaguda.
Chameleon soil water sensors, which mimic a plant to understand how much water is present in the soil, were installed to monitor water level in the root zone of plants. Based on the colour code — red (irrigation highly essential), green (water needed in two to three days) and blue (water sufficient) — farmers decided when to irrigate their fields. The sensor arrays were inserted below the ground level at a depth of 15 cm, 30 cm and 45 cm to read water availability data.
Joint governance
“Besides access to irrigation, promoting community stewardship in water management and governance is critical for ensuring long-term sustainability,” said Aniket Likhar, District Project Officer, SPPIF, Malkangiri.
All villages under the micro-irrigation system have functional VWUCs. The husband and wife of each benefiting household are its members, so there are 30 to 50 members in a given village.
Villagers elect the VWUC president, secretary and treasurer. The president looks after overall governance and water management, while the secretary coordinates meetings with farmers and monitors timely water delivery. The treasurer collects and manages user fees deposited in bank accounts. If there is a grievance, a farmer can reach out to the president and secretary. 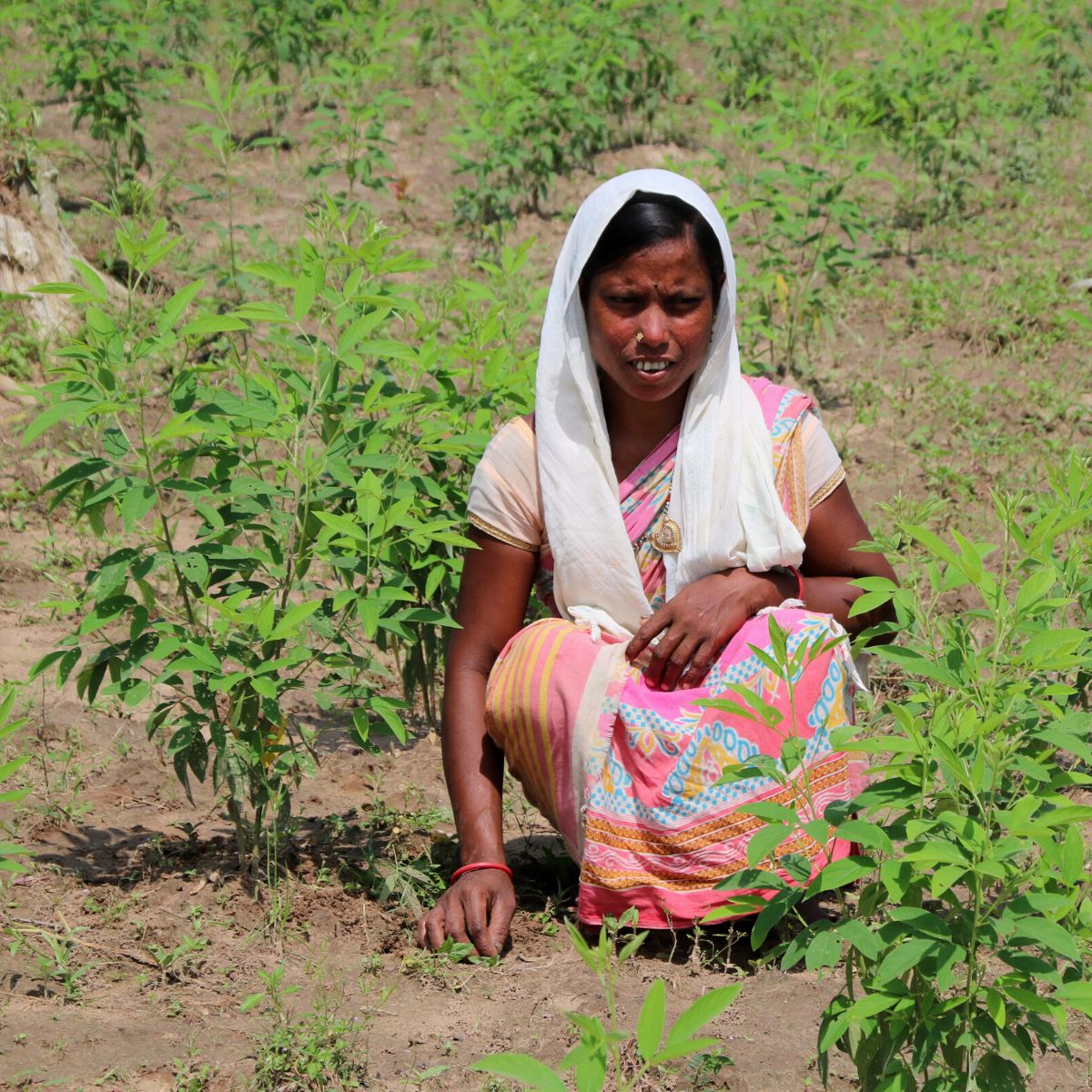 For years, tribal women have been conserving seeds of indigenous crops in earthen pots. This traditional knowledge was utilised by the agriculture department to identify the climate resilient crops (Photo: Abhijit Mohanty) 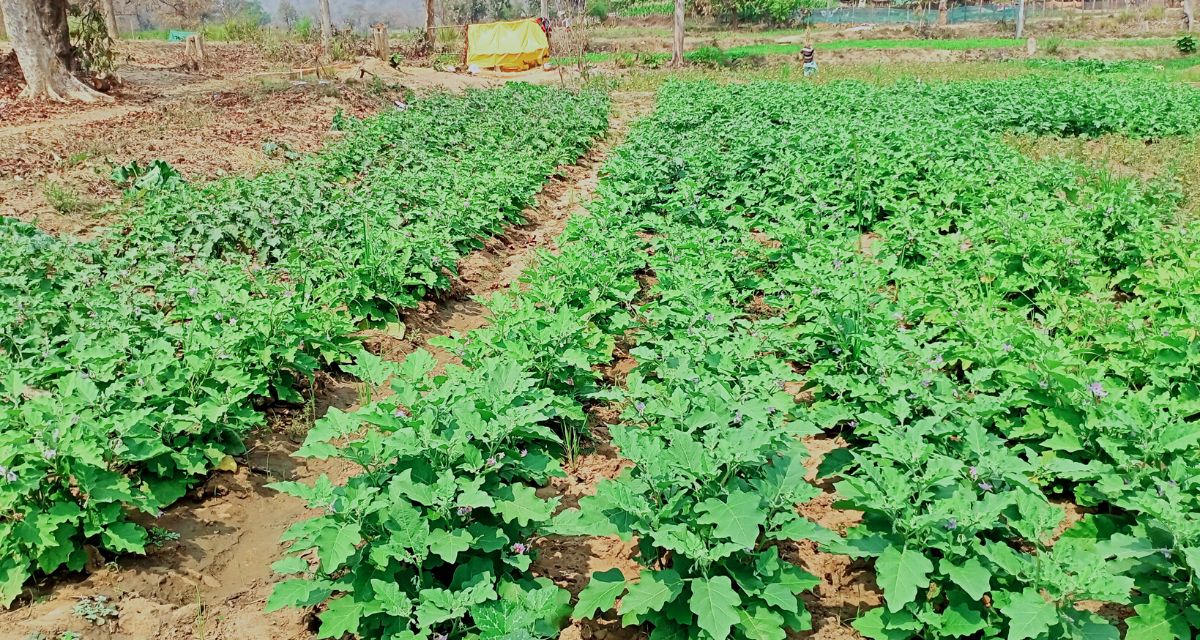 Tekguda VWUC president Chandrasen Madhi said they collected Rs 100 per month from each household as user fee and deposited it in the VWUC’s bank account as an emergency fund to deal with machinery glitches and repairs. The VWUC members charge a fine of Rs 50, if they find cases of excess water use during their routine inspections.
The VWUC bars monocropping. Meetings to assess seed availability and decide on the crops to be grown are organised during kharif and rabi seasons, according to Totaguda VWUC president Lakhmi Khara. Decisions are unanimous, mostly based on the suggestions from elderly farmers and guidance from department staff. The block agriculture officer (BAO) visits tribal villages to provide technical inputs from time to time.
Resilient crops, effective land use
Pulses and millets are preferred crops as they need less water and have higher Minimum Support Prices (MSPs). “Special focus was given to revive traditional crops, including pulses, millets and tubers, as they are climate resilient, highly nutritious and a part of the local food culture,” said Chief District Agriculture Officer Nandagiri Ramkrishna Hayagreeva.
With farmers’ help, agriculture department officials have identified seeds with high yield potential and water resilience, to help select the most promising varieties suitable for the local climate, the soil and the hilly terrain.
“For years, tribal women have been conserving seeds of finger millets, foxtail millets, little millets, paddy, black gram, red gram and green gram in earthen pots,” said Manjula Sisa, the sarpanch of Somnathpur panchayat in Korkunda.
“Before the launch of micro-irrigation system, we grew only dangar dhano (upland paddy) during rainy season,” said Bhagirathi Madhi, who used to migrate from Tekguda to Andhra Pradesh to work in a brick kiln for Rs 400 per day.
However, in the last two years, Bhagirathi planted red gram, green gram, black gram, finger millet, groundnut, sesame and tubers twice a year. “I now earn around Rs 25,000 from groundnuts, Rs 15,000 from millets, Rs 8,000 from pulses, Rs 6,000 from sesame and Rs 4,000 from tubers,” he says proudly. 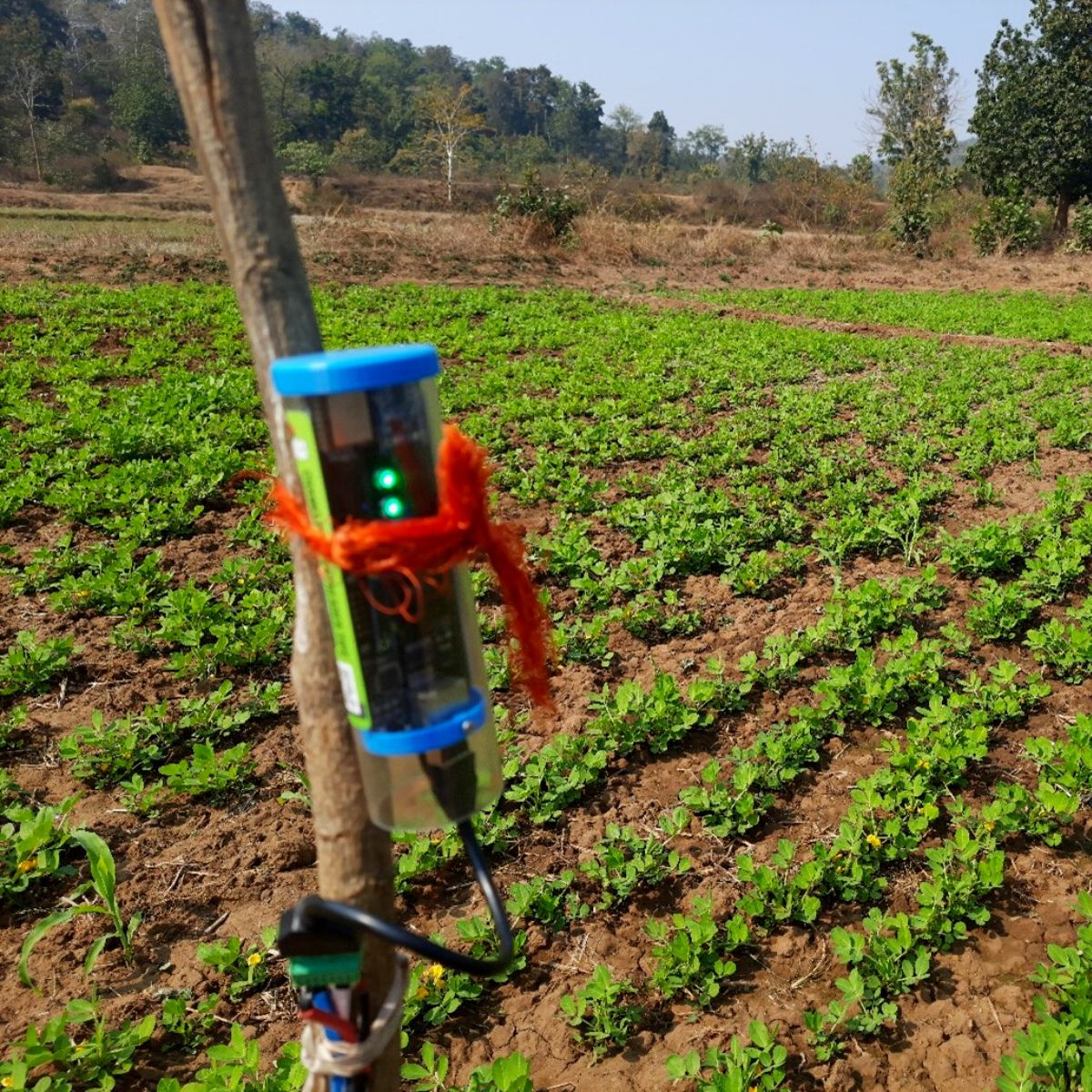 Chameleon soil water sensors installed in Totaguda village in Korkunda help the farmers to monitor water level in the root zone of plants (Photo: Abhijit Mohanty)
Farmers also practise rotational cropping in each season to boost soil fertility and water-retention capacity. “After harvesting paddy and finger millet, we sow green, red and black gram seeds as they use up the leftover soil moisture,” said Subarna Khara of Totaguda.
Papaya, drumstick and guava serve as farm fencing. “These trees provide shade to the crops and act as a barrier against wind. Their deep root systems help in soil conservation and moisture retention,” said Lachma Kurami at Batriatal.
Lachma grows pumpkin, bitter gourd, ridge gourd and bottle gourd around her farm fencing. In winters, she earns around Rs 1,500 per week by selling creeper varieties. In summers, demand is more and supply is less. “This time, I earned around Rs 3,000 a week,” she said.
Better yield, income and nutrition
“Micro-irrigation has decreased water requirement and fertiliser cost,” said Nigamananda Behera, an agronomist at Krishi Vigyan Kendra, Malkangiri. Mixed cropping reduced topsoil run-off during rains, thus improving soil fertility and yield.
“I now harvest eight quintals of groundnut per acre, against the earlier five,” said Laki Madhi of Tekguda. Under mixed and intercropping methods, the vegetable yield is also up from around 150 kg per cent (0.1 acres) to over 300 kg.
Similarly, Ghasi Kirsani of Chitapari III is harvesting around six quintals of green and red gram per acre against the earlier three. From Rs 8,000 a year, her income has increased to around Rs 20,000 during each cropping season of kharif and rabi.
For the first time, farmers are selling finger millet at MSP in local markets. Anganwadis procure little millet in Mathili block to provide nutritious meals under the Integrated Child Development Scheme.
According to Khairput BAO Hemant Kumar Padhiari, better yield has helped farmers to switch from a cereal-centric diet to a diverse food basket. “We used to spend Rs 700 per week to buy vegetables, but it hardly lasted for a week,” recalled Laxmi Hantal, whose family now saves that money and consumes more varieties of vegetables.
“This model has the potential to scale up in other tribal villages. Our field assessment has found that around 800 acres are suitable for micro-irrigation in Talaguda, Darduruguda, Khadikajodi, Kandhaguda and Semiliguda villages,” said Manaswini Mohapatra, Assistant Agriculture Officer, Malkangiri block.
Edited by Rekha Pulinnoli
This article is a part of 101Reporters' series on The Promise Of Commons. In this series, we explore how judicious management of shared public resources can help the ecosystem as well as the communities inhabiting it.
The cover image is of a farmer couple who have adopted micro-irrigation technique for their field, captured by Abhijit Mohanty.
The Promise Of Commons