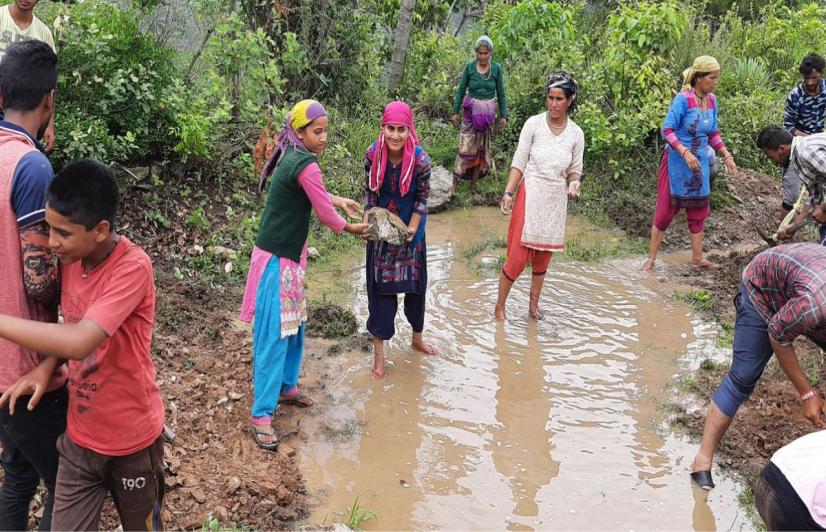 These percolation pits are saving women the time and effort it takes to find and carry water over long distances.

Uttarkashi: Over the last decade, it had become increasingly hard for Sartama Devi (55) to source water around her home in Patara village of Uttarkashi district, Uttarakhand. “Our water sources had been drying up with the diminishing monsoons. It has affected our livestock. In our fields, the koda-jhangora (Indian barn millet) crop had been withering away,” she said.

Water springs in small amounts in these mountain villages and exhausts quickly as the villagers use it for daily chores and to meet their livestock’s needs. These natural springs were not sufficient for the 300 families in Patara village that have about 275 animals.

Pooja Rana (27), a farmer who is also Patara’s panchayat chief, said that the water taps drawn from the springs in their hamlet are functional for barely an hour or two in the morning. In summers, the taps run completely dry.

It’s ironic that the Bhagirathi river runs down from its glacial origin at the foothills of Patara — just 2-3 km away. It later meets the Alaknanda river and forms the Ganga. Despite being so close to India’s most extensive river system, Patara has struggled. “People over the decades have migrated, leaving behind their farms. Many have settled on the Delhi-Dehradun road,” Devi said.

Bringing chal-khals back to life

In 2019, Patara ushered in change when Devi formed the Him Patara Self Group to conserve water and revive water sources closer to the village.

With the men mostly absent, having migrated in search of better opportunities, the women became largely responsible for running the village. In their interactions with the local administration, they would constantly bring up the problems they were having with water. It was then that the village development officer, Sunil Agnihotri, motivated them to set up a self-help group and establish contact with NGOs that were working on water conservation in the area.

The women started learning more about chal-khals; these percolation pits used to be built and maintained by mountain communities but this traditional knowledge had been lost over the years. In Pauri, Garhwal, Kumaun and other regions of Uttarakhand, several NGOs have been working the past few decades toward reviving chal-khals. But the work often happens in isolation, with a few villages benefiting and some hearing about it through word-of-mouth while many others still removed the means to access and implement this traditional knowledge.

A few years prior, there was some attempt to build chal-khals in Patara under MGNREGA but Devi said they were done without much thought (for example, they were built at non-ideal locations or even, once, cemented at the bottom rendering it useless) and the community didn’t know how to maintain them.

This time, the 100 or so women who had joined the initiative relied on hereditary knowledge to locate and revive old chal-khals that had fallen into disuse as well as scientifically evaluate ideal locations for new ones. 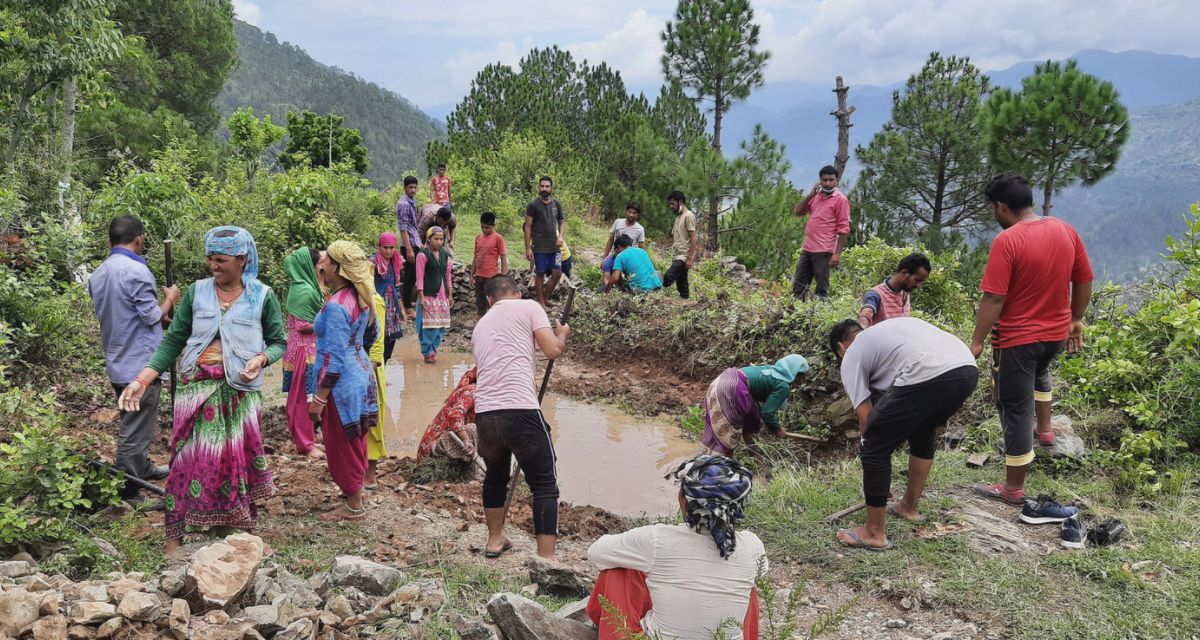 These percolation pits - usually measuring eight metres in diameter and one metre deep, though the size varies - are dug on sloping grounds. They collect water from the rain which seeps into the ground, improving the quality of the soil and recharging the groundwater. On the surface, it meets the villages’ everyday needs. A single waterbody can store up to 64,000 litres of water.

“For three years, the women from Patara relentlessly worked towards water conservation. Initially, all of our five chal-khals turned barren since we didn’t know how to maintain them.” They need to be routinely rid of the silt, mud and rocks that accumulate in the pits but due to lack of collectivism people stopped doing these traditional tasks and were dependent on the administration, she rued. “But we revived them and added new ones to the lot,” Devi said.  At Patara, there are now 11 chal-khals that have collected and stored an estimated seven lakh litres of water over the past three years, helped along by the unseasonal rains.

Between the monsoons in June to September, the pre-monsoon rains in March and the occasional winter rains, the chal-khals are able to ensure a steady supply of water for a large part of the year. “We have built a majority of the chal-khals near the cattle yards to quench the animals’ needs. One cannot survive rural life without the animals,” Devi said.

The conservation effort has resonated among other villages in the district, in at least eight neighbouring villages people have started digging their own chal-khals. Devi received the Women’s Water Champion award from United Nations Development Programme India earlier this year. 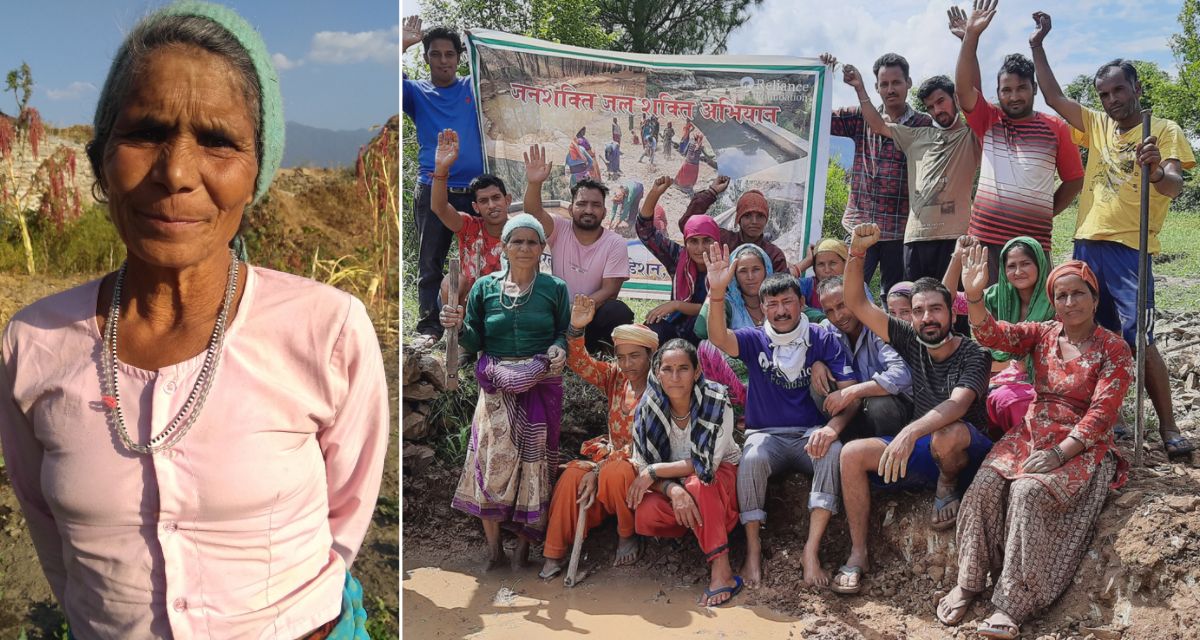 (Top left) Sartama Devi and (top right) members of the Him Patara Sangathan; (below) the community works routinely to maintain the chal-khals by clearing the accumulated silt, mud and rocks (Picture courtesy of Kamlesh Gururani) 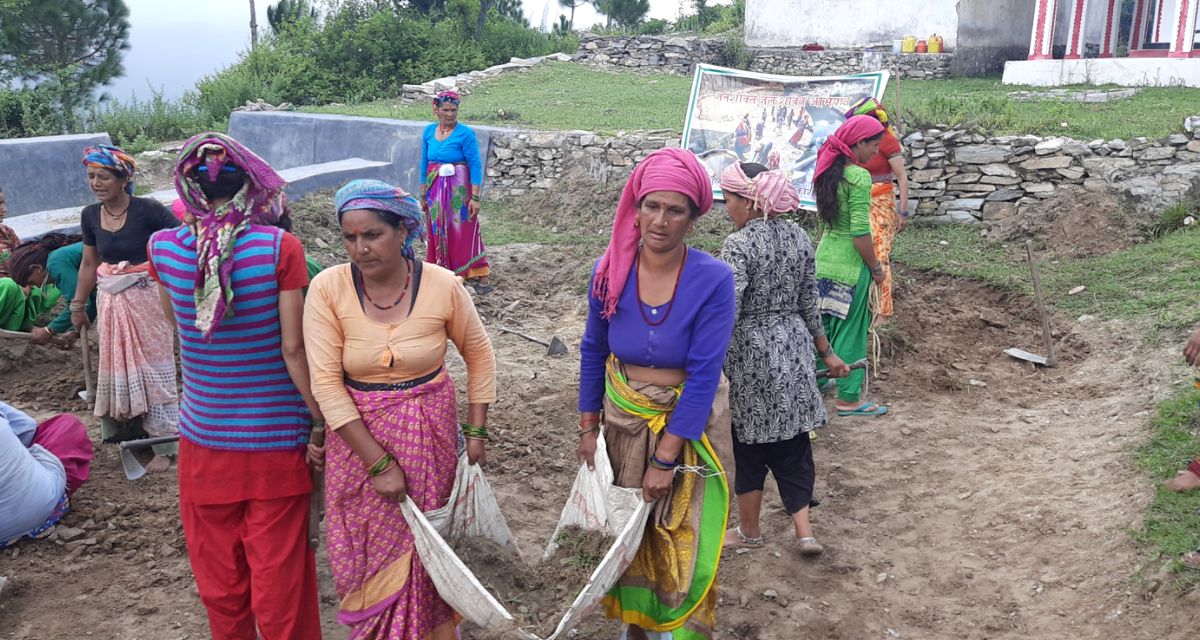 Rana reflected on how the chal-khals have brought about a dramatic change in the women’s routines. “It has saved the women from toiling all day,” she said.

Earlier, the quest for water would consume the whole day.  The women would start their days by foraging in the forest for cattle fodder, while trying to find a source of water. Upon returning, they would take the animals to the water source. “Some even carried water back to their homes in their cans,” Rana said.

Ram Pyari, a resident who worked with the women on the chal-khals, remembered carrying two containers of twenty litres back each day on her shoulders for her livestock. “Now, we do not have to toil unnecessarily. The water in the percolation pits will last us the next few months. It has also benefited the vegetables and herbs that several of us have planted in our fields,” she said.

These ‘nutri-gardens’ were also part of the efforts to improve nutrition among the women, many of whom were anaemic and easily exhausted from their arduous water duties every day. 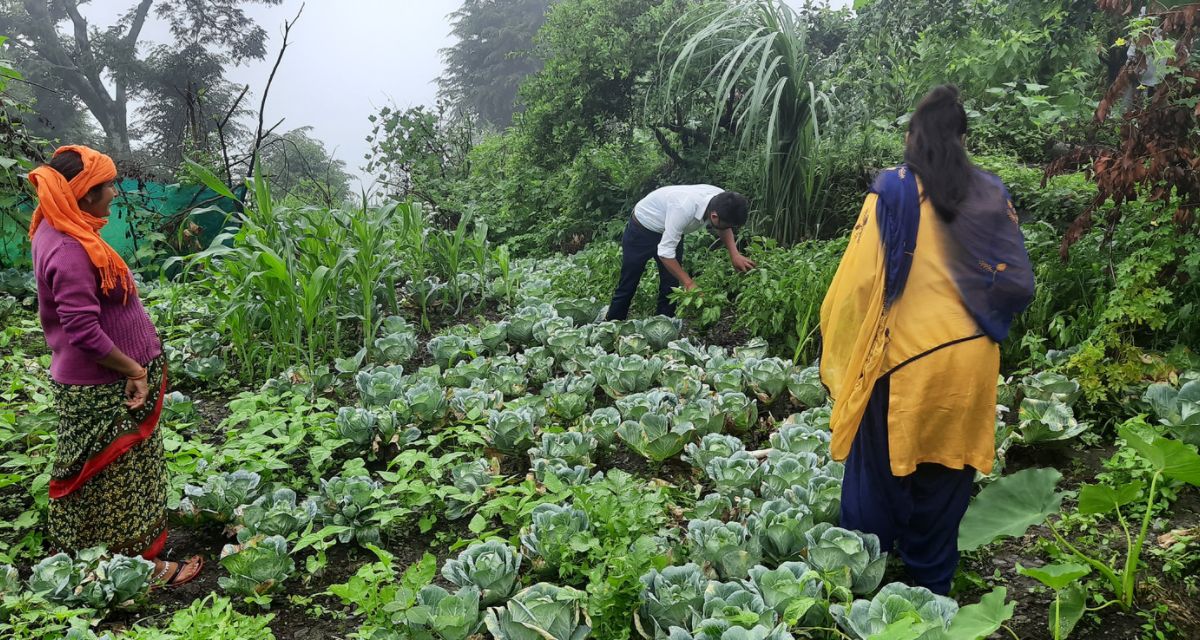 The vegetable gardens were created to improve nutrition among the women, most of whom were found to be anaemic (Picture courtesy of Kamlesh Gururani)

The chal-khals have also provided some measure relief to farmers like Vijay Rana (35), who is cultivating black lentils, toor dal and paddy. “The earth has been rendered soft due to moisture retention. However, that is all the help that the chal-khals can give us. We still have to rely on the rain for most of the water as our fields are in the lower reaches whereas the percolation pits are on higher ground,” he said.

In Uttarakhand, 594 of the 16,793 villages depend entirely on natural sources, and about 90 percent of the population of the Himalayan region depends on springs for drinking water. A NITI Aayog report has highlighted the issue of drying water resources in the Himalayan region. In 2018, the state water board acknowledged that over the previous three years, every one of the 500 water supply projects had seen at least a 50% decrease in water discharge, with 93 of them seeing a decline of more than 90%.

Gaurav Kumar, chief development officer of Uttarkashi, confirmed that many sources in the district have indeed dried up, while a few others have been encroached upon. “New constructions have obstructed the sources. Freezing or solidification of soil due to construction and displaced boulders due to landslides have altered the flow of the mountain streams,” he said.

And chal-khals can play a crucial role in this. According to Vishal Singh, executive director of the Center for Ecology Development and Research (CEDAR),  “We can improve the water system in the mountains by reviving springs. It can also improve the health of the forests as forests and water are both intertwined. For this, we have to map the recharge zones of these springs and carry out water conservation works here. Covering 2-3 hectares or more, these recharge areas can benefit from the construction of chal-khals and planting broad-leaf plants like oak. This is an effective solution to solve the problem of water in the Himalayan region.”

This article is a part of a 101Reporters' series on The Promise Of Commons. In this series, we will explore how judicious management of shared public resources can help the ecosystem as well as the communities inhabiting it.