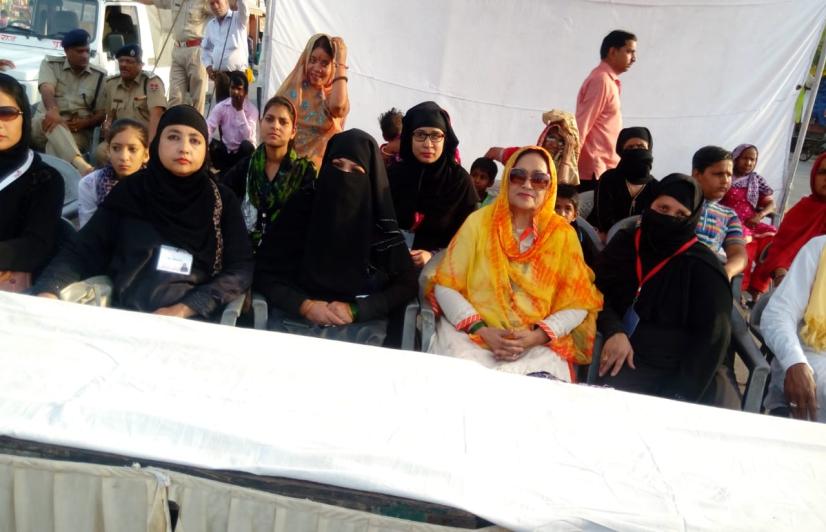 Jaipur, Rajasthan: In a small office situated in the narrow lanes of Jaipur, Jahan Ara counsels women and couples from the Muslim community to help them solve their marital discords. She speaks in a soft but a clear and firm voice. In a session, Ara tells the woman about her rights and the man his duties. She stresses the importance of dignity in relationships.

The session ended with the couple agreeing to resolve their differences. She is no ordinary counsellor, Jahan Ara is among the two women from Jaipur who were certified as Quazis (judges in the Quazi court) in February 2016.

The effort to train Afroz Begum and Jahan Ara was facilitated by the Bharatiya Muslim Mahila Andolan (BMMA), an organisation working for the rights of women. They were trained at Darul Uloom-i-Nisawa in Mumbai with the hope that they will perform nikah (Islamic weddings).

However, even after four years, these two quazis are yet to solemnise a single nikah. They continue to face opposition from the male quazis and maulvis. Ara stated that they wanted to solemnise a nikah, but there has been so much opposition and criticism ever since they became certified quazis.

Ara added that they have tried to convince many families to let them perform the nikah of their children, but nobody has agreed to it yet. “Some have promised us that they will get their children married by me, but the children are too young now. I am not disheartened, change will come, even if it is slow,” she said.

Quazi Moh Hafiz Ayub highlighted that Shariat law (Muslim Personal Law) doesn’t permit women to be quazis and in Muslim nations, all quazis are men. “Women have all the right to come forward in life, but according to Islam, only a man can lead the Namaz in a mosque or function as a quazi,” he claimed.

Apart from allowing to perform nikah, they also want to change the traditional system of the appointment of quazis, especially the Shahar Quazi (Chief Quazi). They have been vocal against the tradition of succession for the post of quazi over generations (son taking over from the father).

Ara mentioned that a quazi should be learned and have knowledge about the Shariat laws. However, the post is being handed down in the same family now and this should change and selections should be done on merit, she added. Unsurprisingly, the Shahar Quazi has not recognized them as quazis and his decision is reflected in the attitude of other quazis too.

Yasmeen Siddiqui, a member of the All India Muslim Personal Law Board, stated that nikahs are read out late at night, sometimes as late as 2 am and Islam doesn’t permit women to go out during the night. These women want to bring about a new system, but they do not have the ability as their training is insufficient and they want to do something for which they are ineligible, she added.

Dr Iqbal Siddiqui of Jamaat-e-Islami Hind, an Islamic organisation, stated that originally, quazis were equivalent to judges in a court of law. However, after the Constitution was implemented, the parallel system of law crumbled and the only work left for quazis was to solemnise nikahs, he added.

He highlighted that while the nikah they perform won’t be illegal, they won’t be able to register it. That right resides with the Shahar Quazi, and he won’t register the nikahs that the women quazis solemnise, he commented.

Afroz Begum has left Jaipur with her family and shifted to her village citing personal reasons. Today it is Jahan Ara alone who carries the baton forward.

She said that the time for her to solemnise nikahs hasn’t come yet, but she is working to save marriages. She counsels couples, explains the laws to them and even resolves their differences. “We have helped save a few marriages. Saving a marriage is equivalent to solemnising one,” she added.

Being supported by BMMA, these women quazis face increased opposition as BMMA has been vocal against Triple Talaq for years.

Jahan Ara has the backing of the BMMA and slowly they are bringing about a change. Rajasthan convenor for the BMMA Nishat Hussain commented that the community is so illiterate that even making them realise that they have rights is an arduous task.

After the Triple Talaq bill was passed, BMMA activists celebrated as they had been actively demanding and campaigning for it. At the same time, they feel the Bill alone cannot bring complete change to the lives of Muslim women.

Husain added that they are now focusing on the codification of the Sharia law. “There is so much mystery surrounding Muslim laws and their interpretation and it needs to be ended. The rules, rights and penalty prescribed by the Sharia law needs to be codified [and] only then will there be absolute clarity on the rights of the Muslim women,” said an emphatic Nishat Hussain.

Former chairperson of the Rajasthan State Women’s Commission Ladkumari Jain praised the efforts by BMMA and said that there is so much ignorance and backwardness in the community that a visible change in attitude will take time. However, they have managed to make so many young girls aware of their rights, she added.

When asked about her future plans, Jahan Ara informed her batchmate Quazi Hakeema Begam has performed a nikah in West Bengal and she feels that the day when she finally solemnises a nikah, as per the Quran, is not too far away.