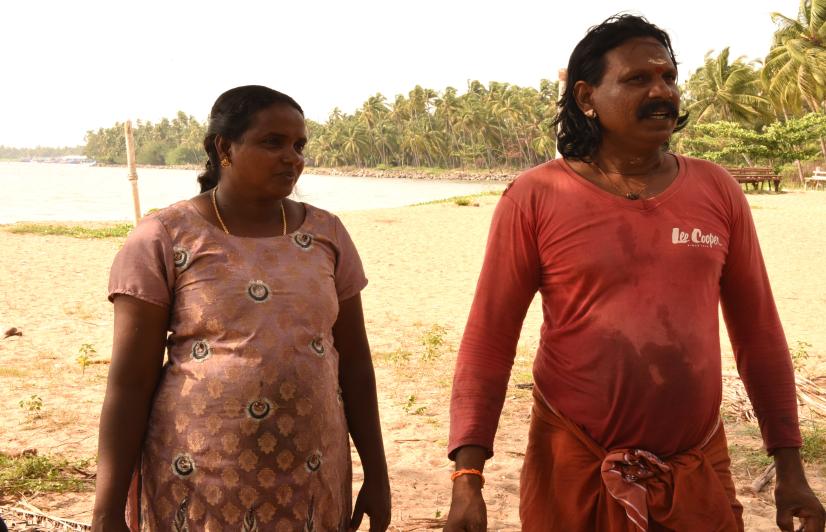 Thrissur, Kerala: Known as India’s first deepwater fisherwoman, Rekha Karthikeyan, 45, who is from Kerala’s Thrissur district, is now under severe distress owing to the COVID-19 pandemic.

Hailing from the coastal village of Chettuva, the life of Rekha and her husband KV Karthikeyan was fairly comfortable until the pandemic-induced lockdown in March. The prohibitory orders, which spanned for a few months, and the absence of customers as people resigned to their homes even compelled Rekha on many occasions to dump her catch into the sea. Most of the days she failed to meet the fuel expenses for the fishing trips.

Karthikeyan and Rekha preparing for one of their fishing trips. Credits: KVA Khadar

Even though restrictions for fishing activities are relaxed now, finding a market for the captured fish is a huge challenge, Rekha stated. People are scared of contracting infection. The absence of people from markets has affected all types of business, including fish marketing, she added.

She goes out to fish at 3 am, and after spending six to eight hours in the sea, she and her husband are now compelled to travel miles on their two-wheeler to find customers. 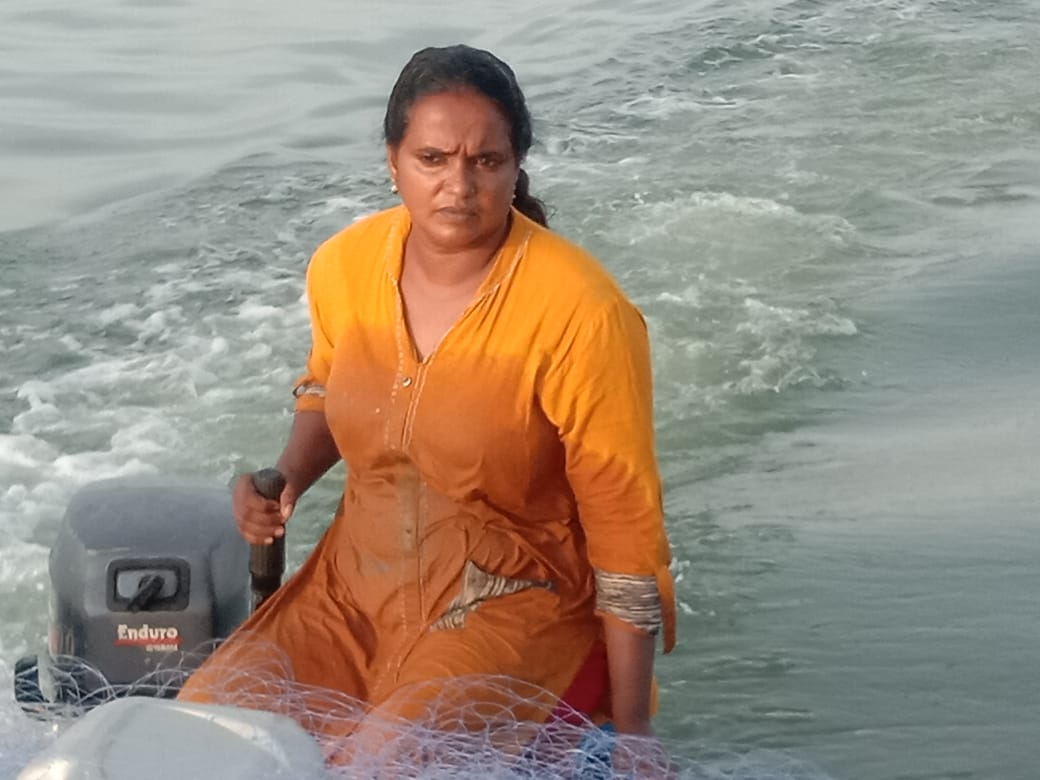 According to a study by the Central Marine Fisheries Research Institute (CMFRI), Kochi, Kerala’s marine fisheries sector suffered a loss of Rs 3,481 crore in just 60 days starting March 23, day 1 of the strict nationwide lockdown. “The lockdown has resulted in considerable hardships to the fishermen community, in terms of loss in working days and resultant curtailment of income from fishing,” stated the report.

With an apparent change in people’s fish-buying behaviour, fishers like Rekha who depend solely upon a particular harbour to sell their catch suffered hard, Dr Shinoj Parappurathu, Senior Scientist at the Socio-Economic and Evaluation division, CMFRI, told 101Reporters.

The supply chain was disrupted as many people changed their purchasing locations while many others reduced fish consumption, he added. People in Kerala largely believed that coastal belts are the source of spreading the coronavirus pandemic, so they were reluctant to visit the fish market and fishing harbours even days after these resumed functioning, he highlighted.

Dr KS Purushan, former Dean of the Kerala University of Fisheries and Ocean Studies, suggested that co-operative societies should have been strengthened during the time of COVID-19 to purchase the catch from traditional fishers. The fishers should be equipped with technological advancements helping them sell their catch online or other modes of electronic commerce, he told 101Reporters.

He stated that the government should look into providing special financial packages to the fishing community during such a crisis.

The sea was totally strange to Rekha as she was a native of a non-coastal area in Thrissur. It was only after her wedding that she moved to Chettuva and took to the sea. Rekha met Karthikeyan while she was doing a Hindi course in Thrissur. They got married despite caste differences and objections from family members.

After her wedding, she didn’t want to be a housewife. When Karthikeyan turned to the sea to embrace his family profession after a series of unsuccessful ventures, Rekha joined him.

“I did not compel her to accompany me, but I was desperately in need of a helper. To hire somebody on payment for this job was not affordable. However, Rekha was quick enough to realise the situation and joined me uninvited,” stated Karthikeyan.

The coastal community fought tooth and nail against her and dissuaded her from going into the sea, as the community believed women weren’t supposed to venture into the sea, and, instead, they were expected to stay at home and pray for the safe return of their husband.

Being a woman to venture out on the sea, she had to face a lot of stigma and jeers from the residents of the village, but she fought against the age-old traditions. “I don’t know why these kind of outdated beliefs still get prominence in our society. What will happen if a woman goes into the sea for fishing,” she argued, citing the fact that she is still the lone licensed deepwater fisherwoman in the country.

The CMFRI officially recognised and felicitated Rekha as India’s first deepwater fisherwoman, felicitating her and her husband; they were given the title of “India’s first fisher couple” on May 5, 2017. Coincidently, it happens to be their wedding anniversary.

According to CMFRI’s records, Rekha is the first woman to venture into the sea for fishing on an out-board boat, stated Dr A Gopalakrishnan, Director, CMFRI. Though there are fisherwomen engaged in fishing in backwaters, no record on a woman’s presence in fishing along the Indian coasts is available so far, he added.

As soon as the CMFRI recognised the couple and identified Rekha as the first fisherwoman in the country, the Fisheries Department of Kerala stepped in and issued a passbook to her so that she could enjoy the allowances by the government given to those going for fishing into the sea. 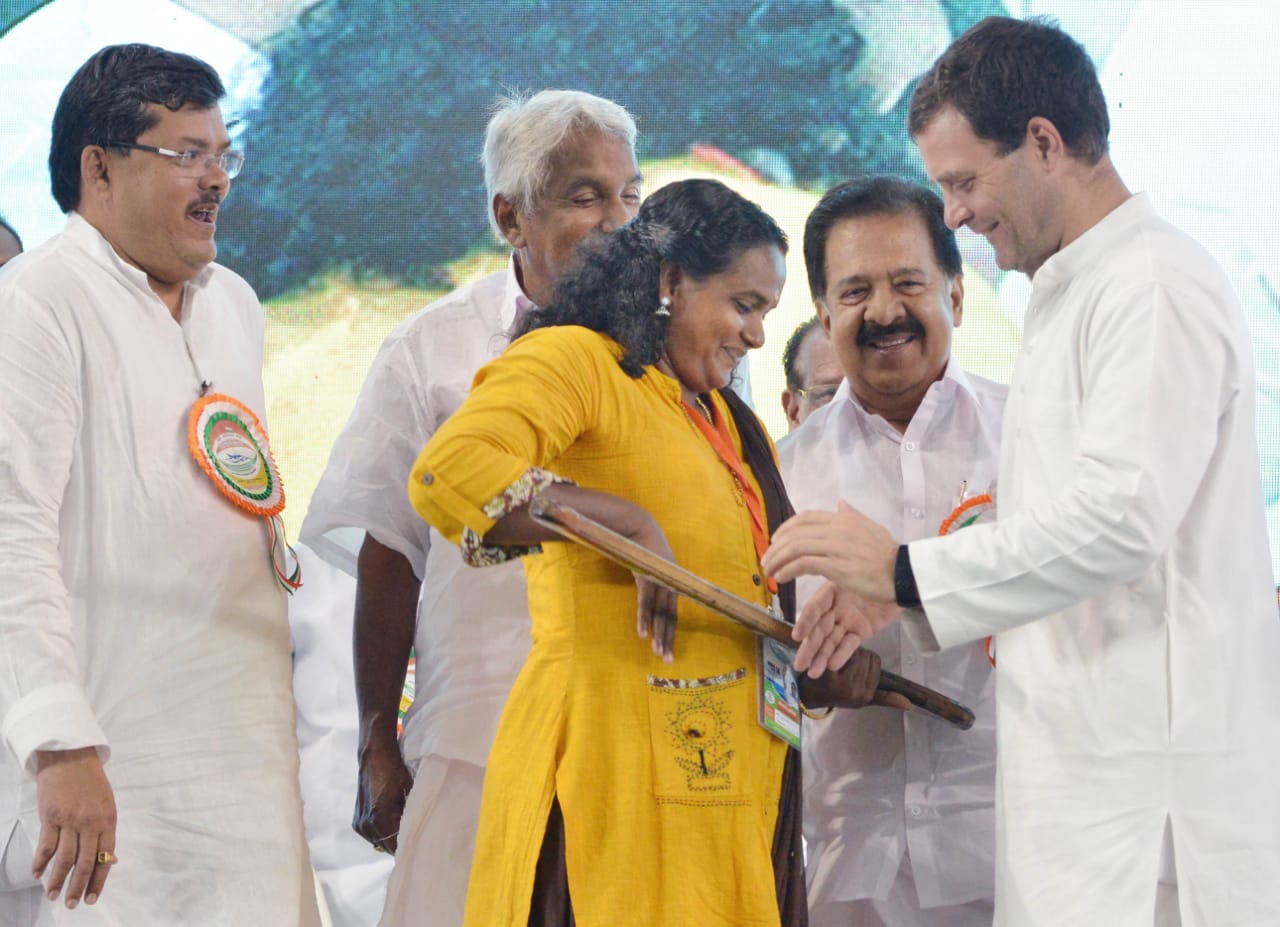 Courageous and determined, Rekha slowly gained a celebrity status in Kerala, with government agencies and NGOs inviting her for various events where she shared her life-sketches with the audience. Her neighbours and native residents then started to realise that Rekha was growing larger than their imagination. A range of people and organisations from political leaders to activists listened to her while she shared anecdotes from her life. During his visit to Kerala prior to Lok Sabha election in 2019, even former Congress president Rahul Gandhi had praised Rekha for leading a heroic life.

The present crisis has cast a shadow over Rekha’s life. “If this situation prevails for a few more months, we will be debt-ridden, which will put my children under pressure as it has become extremely difficult to sustain these days,” she stated.

She has four daughter. The eldest one got married last year and the other three are in a government school.