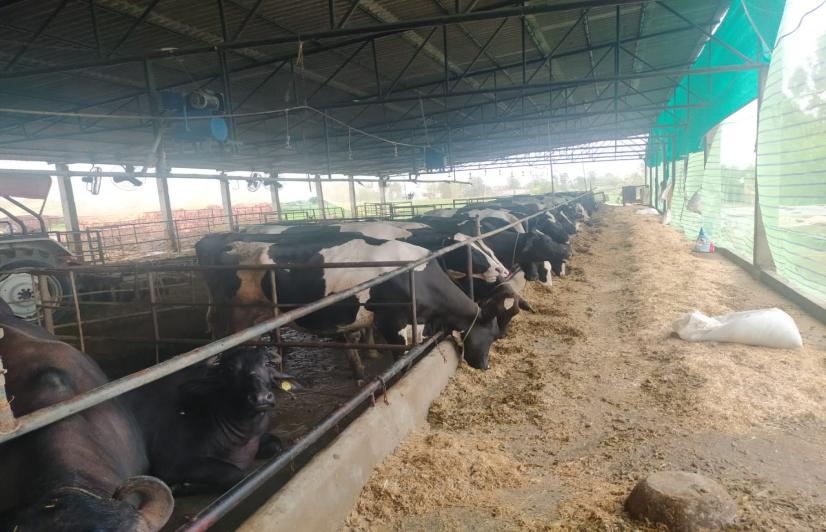 Chandigarh, Chandigarh: With the disruption of supply chains and drop in demand for milk and dairy products during the COVID-19 lockdown, the dairy farmers in Punjab were heavily impacted . Experts say that though the lockdown measures have been relaxed, dairy farmers are yet to get back on their feet.

According to a study by the National Dairy Research Institute (NDRI), Karnal, the dairy supply chain has been at the receiving end of the COVID-19 lockdown, but the preliminary analysis showed that dairy farmers have suffered higher losses primarily owing to the failure of adjusting the supply as per the demand.

Inderjeet Singh, who recently retired as director of Punjab Dairy Development Board, a nodal agency for the welfare of dairy farmers in Punjab, told 101Reporters that COVID-19 affected most of the six lakh dairy farmers in the state one way or another.

He mentioned that Punjab’s total per day milk production comes to 360 lakh litres. About 50% of this is sold to households, 30% is used in commercial establishments like restaurants and tea shops, and the remaining 20% is used by milk powder manufacturers and other dairy products manufacturers.

He said that owing to the sudden lockdown, Punjab had an excess of 40-50 lakh litres of milk per day and thus, its market rate crashed by 30%. He asserted that the industry is yet to come out of the depression phase, and mentioned that though the milk sales to households have stabilised, the sales to hotels, restaurants, dhabas and dairy products manufacturers is still down.

Inderjeet fears that many small dairy farmers, who have less than 10 milch animals, will eventually leave the dairy business, while the expansion plans of the medium and big farmers will stop.

Jasbir Singh, a farmer from Sekha village in Barnala district, had 30 domestic animals as cattle before COVID-19 outbreak in March. Now, he is left with just 12 animals and claimed that the 40-day COVID-19 lockdown “ruined him financially”.

He mentioned that he had taken a loan of Rs 9 lakh to set his farm up, but the COVID-19 lockdown made it difficult for him to pay the instalments on time.

Happy Singh, a milkman from Sangrur’s Kunberwal village, stated that COVID-19 had a ripple impact on the milk industry. Owing to low occupancy and footfall in hotels, restaurants and other such establishments, the sales in the sector went down by 60-70%.

Even during the winters, which is the wedding season in the state, the curbs on gathering have limited the number of guests. In October, the state government relaxed the norms, allowing less than 100 persons and a maximum of 200 in big wedding halls with open areas. However, in a state where the average wedding crowd is 400-500 people, “How do you expect milk sales to go up in such conditions,” argued Happy.

He asserted that though Diwali provided some relief, the condition returned to the same soon after.

Gurpal Singh, a dairy farmer from Namol village of the Sangrur district, has 54 animals, but he has put 22 of them on sale. Ever since COVID-19 broke out, the price of the milk has gone down by 20%, he mentioned.

Last year, skimmed milk used to be sold for Rs 35 per litre, but now it has come down to 29, while the price of full-fat milk was Rs 50, now it is Rs 40, he informed. To add to the woes, the rate of cattle feed has increased by Rs 3-4 per kg, and it increased the input cost, he mentioned.

Earlier, he used to earn around Rs 15,000 per day, but now it has come down to around Rs 10,000, but increasing costs of cattle feed and veterinary expenses have decreased his revenue to half.

Atma Singh, a Bathinda-based dairy farmer, who is also the president of Malwa Dairy Farmers’ Association, told 101Reporters that the dairy farmers, who supply milk to households, managed to survive, but dairy farmers supplying milk to big wholesale suppliers were worst-affected by the pandemic.

“If we try to bargain with wholesalers, they ask us to sell it somewhere else,” he commented.

He has 80 cattle animals and sells about 500 litres of milk every day. He added that many farmers have even curtailed the diet of their cattle, but predicted that it would end up affecting the overall health of the animals.

“Sometimes, I feel like selling my entire farm, but [I know] that it’s not the solution either,” he commented.

He asked the administration to step in and help farmers, especially those with limited resources

Karnail Singh, director, Punjab Dairy Development Board, told 101Reporters that the sentiments are likely to remain low till the COVID-19 threat is mitigated.

He explained that the demand and supply model dictates the milk business, and when the demand has gone down, it’s natural for the prices to crash.

“We can only hope that the vaccine [for COVID-19] comes soon and normalises the situation. Otherwise, one can’t really hope the demand to pick up any time in the near future,” he commented

(This article is a part of a series on Covid's impact on India's marginal farmers. The series has been funded by Internews Europe.)