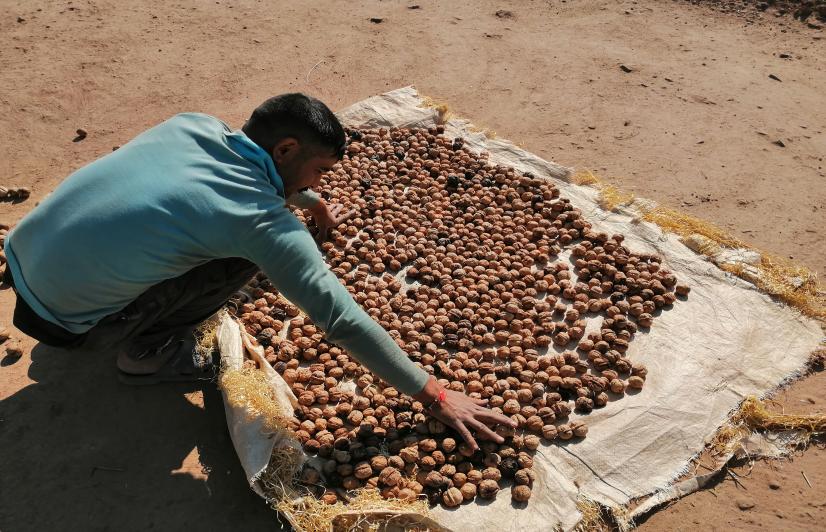 Udhampur, Jammu and Kashmir: For the farmers in Jammu and Kashmir’s (J&K) Udhampur district, the COVID-19 pandemic and the ensuing lockdown affected their earnings. The absence of transportation facilities meant they were forced to sell their produce for a fraction of what they would get in the pre-Covid era.

A study by an Indian agricultural university pointed out that owing to the prolonged lockdown period, farmers throughout the country are in stress as their produce is rotting away in the absence of functioning mandis and the curbs on transportation meant that labourers couldn’t reach farms for harvesting.

Shiv Dass, 70, a small farmer from Kainth Gali area in Udhampur district, stated that he wasn’t approached by traders from his walnut yield.

Earlier, he mentioned, traders from Punjab, Jammu & Kashmir and Katra would come to their area and purchase their walnut crop from their doorsteps. He would get Rs 180-200 per kilogramme, but this year, he was forced to sell the crop at Rs 80-100 per kilogramme.

Sandoor Singh, 54, a farmer from Meer village, stated that he to sell his walnut crop to traders during their visit to Amarnath or Vaishno Devi. He said he earned Rs 200-250 per kilogramme of dry fruits, as these wholesale traders would sell the fine quality walnuts to the pilgrims at higher prices in their retail shops. However, as the visit to pilgrimages have been on hold owing to the pandemic, his earnings were affected. “We didn’t get the buyers and under the prevailing conditions, we sold our crops at marginal rates to the local wholesale traders,” he commented.

Sandoor added that farmers from Chulna, Jhanori, Dakh Laid, Kounti and Khour Galli areas of Panchairi Tehsil in Udhampur district have also been affected. They used to sell their anardaana (dry pomegranate seeds) at Rs 500-600 per kilogramme during the annual pilgrimages, but this year they sold their crop at Rs 350-400 per kilogramme, he mentioned.

Dharam Singh, 65, a trader from Meer village, stated that he used to purchase walnuts, morchella (a type of mushroom), anardaana and other wild herbs from local farmers and sell them in Khari Baoli spice market of the New Delhi.  However, this year, he didn’t purchase anything from the local growers owing to the spread of COVID-19 pandemic as it would have been difficult to sell the produce in Delhi as the markets are shut, curbs on transportation have been placed and there’s uncertainty over the future of the markets, he mentioned.

“I used to carry truckloads of goods to Delhi and earn my living from this, but this pandemic has shaken the backbone of my business,” stated Dharam.

Even maize farmers of the area claimed that earlier they would sell their grains at Rs 1,700 per quintal, but this year they sold the same amount for Rs 1,200. They blame the government over its failure to provide the farmers transport facilities to take their produce to city mandis or arrange for them proper markets in Udhampur town.

A study highlighted that food safety and security are a global concern in the present scenario, and the supply chain has been hit hardest by COVID-19, which causes food security of most vulnerable segment of the population at risk. To address this, the government should enforce measures to control the pandemic without disturbing the food supply chain and considering the food security of their citizens, it added.

VK Sharma, former Area Marketing Officer, J&K Horticulture, Planning and Marketing Department, blames the walnut and anardaana growers for the monetary losses they suffered due to the pandemic. If the local growers weren’t getting buyers, they could have approached the horticulture department, and they would have received help, he commented.

He also cites adulteration as another reason behind growers not getting good prices for their crop. Sharma claimed that the local walnut growers in Panchairi area compromise with the quality of their produce by mixing best quality walnuts with the poor quality ones for extra money.

Vijay Attri, Marketing Inspector, Horticulture, Planning and Marketing Department, Udhampur, stated that the central and the UT government had started many schemes to help the walnut farmers, but they were unaware of the issues faced by the farmers.

“How would we get to know that the growers need help? At least they should approach us or the concerned District Development Commissioner. We didn’t receive any representation either directly from the farmers or through their union leaders,” he stated.