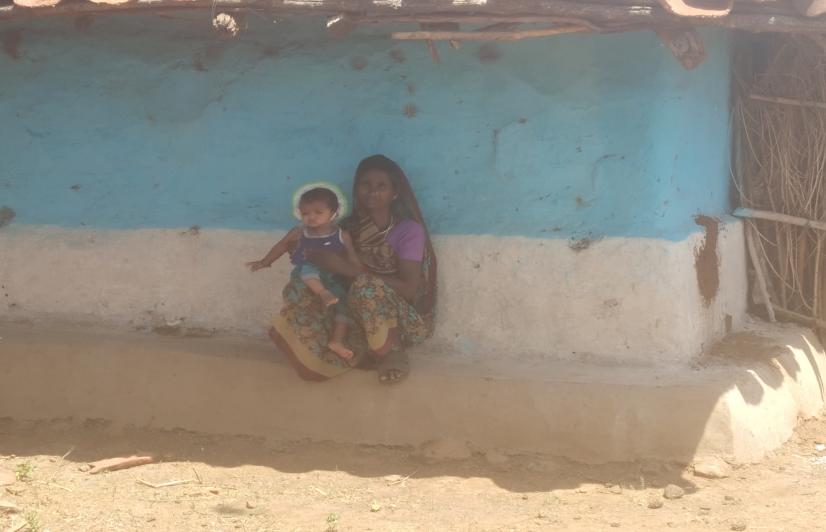 Chutka/Mandla: Villagers in Chutka, Mandla district of Madhya Pradesh are hoping to use the power of the ballot in the 2019 Lok Sabha elections to prevent the setting up of a proposed nuclear plant. Their determination is evident in the many posters tacked to trees which state, “Vote only for the party that cancels the power plant.”

This is the story of a people determined to fight against forced evictions, environmental pollution and loss of livelihoods due to the government, for the third time round. These villagers had earlier been displaced due to the Bargi Dam project.

In 2009, the Nuclear Power Corporation of India Ltd. (NPCIL) decided to establish a 1,400 MW atomic power station in Chutka village and identified the Madhya Pradesh Power Generating Company Ltd. (MPPGCL) as the nodal agency to execute the project. The project got the in-principle approval from the government in 2011 and was allotted 16.5 ha of land. This project is estimated to displace 70,000 people in 54 villages in Mandla.

The cause of Chutka villagers has found supporters in leading environment activists like Medha Patkar. In a recent news report, Patkar stated that, "Under the Fifth Schedule of the Indian Constitution, the governor has the power to annul any law that goes against tribal interests; the government is doing the opposite." She even cited a Supreme Court ruling in the case of the people affected by the Omkareshwar Dam project that states, "Payment of compensation does not mean the affected people have accepted the terms."

Mandla is covered under the Fifth Schedule of the Indian Constitution, where land cannot be acquired without the consent of the Village Assembly. According to activists and news reports, land was allotted to MPPGCL without the consent of the Village Assembly, violating the Forest Rights Act. Patha, Kundla and Tatighat Village Assemblies have rejected the government’s proposal to set up the nuclear plant. Locals have also refused the government’s rehabilitation plan to shift them to Potla village. They even held Gram Sabha (Village Assembly) meetings, where their intention of not leaving their lands was openly declared.

Dadulal Kudape, a 55-year-old villager says, "Mother nature has given us everything from food to drinking water. We do not need electricity or any nuclear plant. We have been fighting since 2009, but the government has tried every possible trick to displace us. We will continue to demand that they scrap the disastrous nuclear project. We do not need multi-storey buildings to live in because we are happy in our huts. Our Gram Sabha also refused to give consent to use our lands."

The villages that are likely to be impacted by the power station project are located on the banks of the Narmada river, 65 km away from Mandla and 80 km away from Jabalpur, and have rich natural resources. When you travel 70-80 km through the dense Satpura forests it is hard to miss the scent of the Mahua flowers. You can find Mahua flowers being dried in courtyards across these villages. These flowers are used for making medicines and also a form of local liquor. Villagers lives centre around the collection of the Mahua flowers along with gathering other forest produce. Agriculture is the main source of income across these villages.

In May 2017, the power plant was given forest clearance for diversion of 119.46 ha of forest area by the Ministry of Environment, Forests and Climate Change. These villagers don't have access to proper roads or transport. With just one bus plying from the neighbouring town of Narayanganj. They do not want to pay the hefty price of displacement in the guise of progress. “This is third time we have had to rebuild our homes. We were displaced from Sarangpur (Bijasen) during the Bargi Dam project. At that time, the government tricked us and our houses got flooded. We built shelters in forest, but forest guards broke them as well. Now, we have shifted to Chutka and are not ready to leave this land." says Premvati Bai, a 60-year-old woman.

Although the villagers have held steadfast to the claim that they did not agree to give their lands, the state government records revealed otherwise. Answering a  question from MLA, Ram Pyare Kulaste about this project in the assembly, the then Revenue Minister, Rampal Singh said that in 2012, 287.21 ha of land had been acquired with the permission of the Gram Sabha. He also stated that villagers in Patha, Chutka, Tatidat, Manegaon had received compensation as per the rules. In 2015, the state government had deposited INR 6-15 lakh into bank accounts of about 450 project-affected families.

Villagers allege that the state administration had forcefully passed the proposal in the Gram Sabha in 2012 with heavy police presence and barring the entry of villagers. Prem Singh Kudape, a villager says, "We tried to enter the Gram Sabha at Patha village, but we were not allowed inside. Many proposals were passed in the Gram Sabha following that session against the displacement."

In 2012, villagers called for a Gram Sabha meeting and listed 20 demands including compensation fixed at INR 60 lakh per acre, 5 acres of land for every adult member, a job for one member of every affected family and 10 per cent of the profits of the power station to be spent on the health and education of the affected villagers.

Vinod Kumar Gunjam, a 22-year-old from the village says, "The compensation is not enough for us as we have been facing displacement since the construction of the Bargi Dam. Why should we pay the cost of development every time? This time we are ready to take this fight to any level, but we will not leave our lands."

Adding her support to this cause, activist Patkar has appealed to the state government to follow the proposal of the Gram Sabha. She and other activists have also raised concerns around radiation-related hazards, as the project is located in a seismically active zone.

Rajkumar Sinha, an activist working for the Anti-Chutka Movement says, "Tribals were not consulted and never agreed to the compensation amount. When they realised the government was duping them, many of them instructed their banks to not to reveal their account numbers to the government. Authorities imposed fake cases against villagers, who are raising their voices to demoralise them. The government is trying to play every possible trick to displace villagers."

According to media reports, in September 2018, villagers impacted by the proposed power plant refused to share their Aadhar details with MPPGCL to receive government compensation. However, MPPGCL obtained this information via banks and deposited the compensation amount directly into the accounts of these affected villagers.

Villager, Sharad Yadav says, "People from the block office and bank came to our village and asked us to open bank accounts. They lured us saying that they will give INR 15 lakh, which had been promised by the NDA government. Most of us signed up for accounts because of this and after a few months the government credited compensation money to our accounts. We are not willing to leave our village for such low compensation."

There is some amount of anger and disappointment directed at the current MP, Faggan Singh Kulaste, as he has not supported the villagers in their fight. "Our MP was not even ready to accept that we are facing displacement for the third time. We have to struggle a lot to prove that we had been displaced by the Bargi project. They displaced us from Bargi by playing tricks and now the government is trying to harass us. Authorities do not approve our PM housing schemes. We  boycotted the Jila Panchayat elections in 2018, but this time we will vote for our demands," says Dadulal Kudape, an affected villager. MP from Mandala constituency, Kulaste was not available for comment.

Villagers claimed that they have voted for the Congress to bring down the BJP government, hoping for improvement in their case. They approached the newly-elected Kamal Nath government to discuss their issues with the project via their local MLA, Dr. Ashok Marskole.

The CM assured them that the Chutka project would be reviewed, as the state had a power surplus. Kamal Nath reportedly said that the MP government had decided to file a review petition in the Supreme Court regarding the order to evict the tribals. He also shared that a special committee would be formed to advise the government on the effective implementation of the fifth schedule of provisions.

Dr. Marskole also opposes the power project and is determined to see that villagers receive their due. "The previous government had bypassed laws and tried to forcefully evict the villagers. I am a social worker before an MLA and I know the reality of those villagers. Many people are still fighting for their compensation from the Bargi Dam project. Now villagers of Chutka have to face displacement for the third time. I have approached the CM and senior leader, Digvijay Singh. Digvijay Singh had also written to the central government during his Narmada Parikrama Yatra a year ago." Marskole adds.

Apart from displacement, villagers are also worried about the likely adverse environmental impact from the proposed nuclear plant. According to a study by Chutka Anti-Nuclear Power Plant Movement, Madhya Pradesh, the plant will consume 7,25,76,000 cu. m. water every year from the reservoir, which will reduce the total flow of water to the Narmada River. Besides, the water waste from the plant could pose risk of radiation, thus polluting the reservoir. Take for instance the Rawatbhata (Rajasthan) Nuclear Power Plant, where NPCIL has prohibited fishing around a 12 km radius of the plant due to radiation concerns.

Geographically, the proposed location of the plant is in a seismic zone posing the possibility of natural disaster striking the facility. This plant is also likely to adversely impact biodiversity in the region. The location/region was hit by the 1997 earthquake and saw minor volcanic eruptions in April 2011.

Speaking about the potential environmental impact of the nuclear plant, Marskole adds, "As of now only 10 villages are affected by the project, but once the station is set up, hundreds of villages nearby would face hazardous pollution. We have to protect the Narmada from pollution. The government should explore solar or wind power to generate electricity."

As Chutka's villagers exercise their vote, the potential power plant project is likely to determine the future of political candidates in the region.