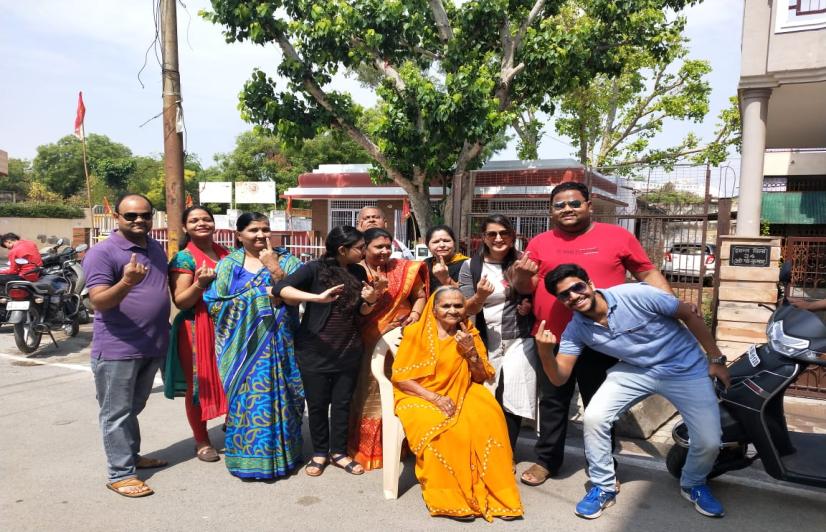 The second phase of polling in Uttar Pradesh saw boycott calls from several quarters and EVM glitches delaying the polling process at several booths. Electorate angry with their incumbent lawmakers over different issues, ranging from lack of irrigation facilities to setting up of polling booths far from villages, boycotted the polls in various regions.

In Gajpura village of Bijnor district, which falls under the Nagina Lok Sabha constituency, people boycotted the elections as their polling booth was set up at a distance of  about one kilometer in Dhampur village. ABout 600 voters from the village boycotted the polls until Election officials reached their and tried to explain to them the importance of casting their votes. Polling began at 2pm in the shifted booth at Dhampur.

District officials across these constituencies had a field day trying to calm agitating voters who had called for election boycott.

In Jagatiya village under Mathura Lok Sabha constituency, the villagers, over 256 voters in numbers, boycotted polling claiming the government and the sitting lawmaker did nothing for their village.

Sitting MP and BJP contestant Hema Malini, however, in a media interaction claimed that, “Development in Mathura is due to my efforts. SP-BSP are only engaged in fighting with each other.” She even said that there is a “huge Modi wave” across the country this time.

In Kyori polling booth under Agra LS constituency, only two votes were cast until 5 pm as the villagers resorted to a sit in protest demanding development of their area. Kyori village falls under the Chambal division and villagers main demand is that of a motorable road to the village.

Not even a single vote was cast over a boycott call made at Kala Gaon in Mathura district citing the lack of irrigation facilities. Even after district officials motivated the electorate to participate in the democratic exercise, only two votes were cast.

“I have been living in this area since my birth and have exercised my franchise many times, but the name of my family and many other people of our area is missing from the voters list. We have all the documents, but the polling officials are not allowing us to cast the votes,” Salim said.

Kunwar Singh Tanwar, BJP candidate from Amroha, complained about bogus voting. “I have heard that a man was caught wearing a Burkha. Women in burkhas should be properly checked for their identity before they are allowed to exercise their franchise,” Tanwar told the media. However, no such incident was reported until Tanwar had made the comment.

Bulandshahr MP Bhola Singh when stopped by security personnel at the entrance of a polling booth placed a call to the District Magistrate, who then facilitated the BJP leader and his supporters’ entry into the polling booth. In a video of the incident, the security officer fielding the call is heard saying that he is not allowed to let leaders go near the EVM. However, in the course of the conversation, he agrees and ultimately allows Singh inside. The video went viral on social media and the Election Commission swung into action.

Bulandshahr DM Abhay Singh, who came in the line of fire after the incident was reported, said that Singh will now be under close scrutiny for the day. “A candidate is allowed to inspect booths. But there is a way of inspecting booths. You cannot go inside the booth and ask for blessings from voters,” the DM said.

Mathura’s gathbandhan candidate Kunwar Narendra Singh alleged the district administration and the Yogi Adityanath government of being responsible for the EVM glitches across constituencies on Thursday.

According to the EC officials over 43 EVMs were replaced in Amroha only.

Lucknow-based political analyst Dr Rudra Dubey sees the boycott call as a protest against the political system. “If people are boycotting the festival of democracy, then one should understand what development has been done in these areas by the respective Member of Parliament. We really need to think what development model the government is giving to us.”

Dubey said that if politicians contest elections promising development, they must perform as people want an answer for everything. “Just visiting the constituencies” will not help, he adds.

Note: EVM malfunction figures across all constituencies expected by 8 pm. We will send an update if it is released.

All pics by Ajendra Chauhan
Political