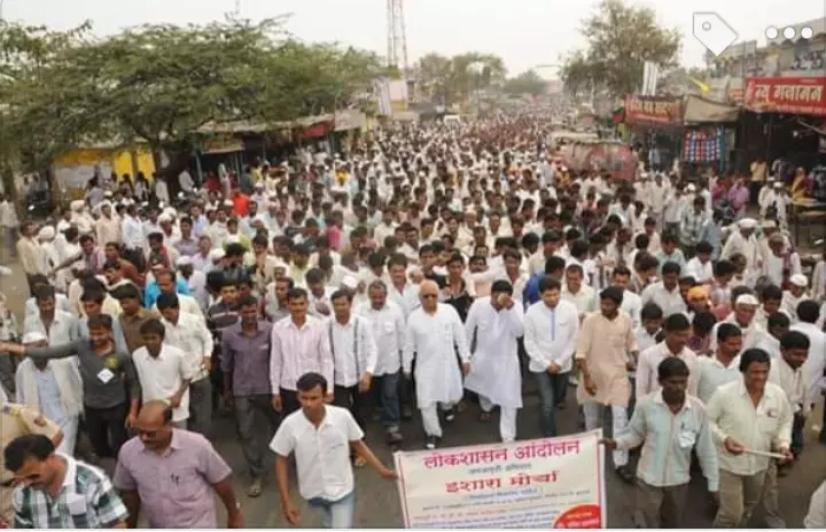 When over 30,000 farmers decided to march on foot from Nashik to Mumbai in the sweltering heat of early March this year, the protest put India’s glaring agrarian crisis at the forefront. But this crisis is not new.

Several states, including Maharashtra, have come up with schemes to waive off farm loans in the past couple of years.  Protesting farmers were dispersed in June 2017 by the Maharashtra government as it offered to waive off farm loans upto Rs 1.5 lakh under the Chhatrapati Shivaji Maharaj Shetkari Sanman Yojana. But the protests this year are only a reflection of how inefficient government schemes have been in bringing relief to farmers.

This protest, as many experts claim, was a walk towards claiming their dignity back. The list of demands made to chief minister Devendra Fadnavis ranged from tribal lands rights under Forest Rights Act, 2006 to announcement of minimum support price (MSP) in line with the Swaminathan Committee’s recommendation of cost plus 50% profit for their produce.

By the CM's own admission in the legislative assembly, the majority of protesters were tribal, landless farmers who have been tiling land without any legal ownership. These are farmers who have never taken a loan as they do not even have the resources to do so. All they want from the government’s end is to have their names transferred on the small forest or community plots they till. The protest, as experts say, has been ideally more about the poor implementation of already existing policies – in this case the Forest Rights Act, 2006.

Of course, an unconditional waving off of debts occupied a considerable chunk of their demands as the erstwhile loan waiver didn’t succeed much in ending the woes of farmers. During 2016-17, crop loan of Rs 42,172 crore was disbursed as against Rs 40,581 crore during 2015-16. The farmers are under grave financial stress and government data bears testimony to the fact. During the period from January to October last year, 2,314 committed suicide in Maharashtra alone. So clearly, for a farmer shrinking under the fatal glare of indebtedness -- a departure from loan payment is thoroughly welcome. But the sense that loan waiver is only an ad hoc measure and the agrarian crisis runs much deeper than what is seen on the surface has prevailed.

An on-ground reading of situation shows government officials’ lethargy in recognizing the community forest rights of tribal and traditional forest-dwellers, alleges Shruti Ajit, a researcher with Kalpavriska, an environment action group, "Although, Maharashta is one of the leading states with respect to the implementation of FRA, within the state, specifically in terms of community forest rights, the recognition is extremely skewed. On one side we have districts like Gadchiroli which shows high rates of recognition, other districts like Dhule and Pune have extremely low or no implemention of FRA at all", says Shruti.

Forest Rights Act is just the tip of the iceberg. Other issues like increase in cost of production, erratic monsoon pattern, lack of irrigation facilities, crop failures and policy level failure of crop insurance are all elemental in bringing about the agrarian downfall.

Crop insurance, for instance, lags behind in helping farmers practically – thereby failing to serve the purpose it has been created for. The Pradhan Mantri Fasal Bima Yojana (PMFBY), launched in April 2016, aims to compensate farmers for any losses in crop yield. A premium of 2% is to be paid by farmers for all kharif crops and 1.5% for all rabi crops to avail the insurance cover.

As per PMFBY guidelines, the insurance cover to be provided to any claimant will be calculated on the basis of average loss incurred by a village or at the panchayat level, and not on the individual level. Subhash Tamboli, executive director, Association Of Voluntry Organsation Working In Rural Development (AFARM), argues that this proves to be the biggest hindrance in achieving the insurance cover for affected farmers, even if they have somehow managed to pay the premium.

“Maharashtra comes under rainfed farmlands and is completely dependent on rainfall for its survival. With erratic monsoon and the drought experience in the  last few years, it has become extremely important for farmers to insure their crops against any failure. But the way in which average loss is calculated under PMFBY is a problem.  It means that irrespective of the loss an individual farmer suffers in a village – say from pest attack or small fire – the compensation they will get will be calculated on the average loss in crop production in that entire village or village panchayat. Essentially, this is a loss-making affair for the individual farmers”, alleges Subhash Tamboli.

According to Economic Survey of Maharashtra 2017-2018, the agriculture & allied activities’ sector is expected to register (-) 8.3% growth rate this year due to comparatively less rains (84.3% of the normal monsoon). The same report mentions 2016-2017 as a good year for agricultural production owing to the good rainfall. A farm’s yield is quantitatively affected by the monsoon and hence water management should be of the highest priority for the state government.

Another factor instrumental in bringing about the agrarian crisis in Maharashtra is the lack of irrigation facilities. KJ Joy, an activist-researcher with NGO Soppecom, is of the opinion that a lot a water transfer is taking place from projects primarily for irrigation to urban areas or industries in the state. “If you look at the statistics, hardly 19% of the entire cropped area of Maharashtra has access to irrigation. I remember the Surya irrigation project in the Konkan region closer to Mumbai, which was basically created as an irrigation project, but now the same pipelines carry water to industrial areas surrounding the region. The water policy says that the primary priority should be providing water for agricultural activities, but the government’s focus has been on industrial development,” says KJ Joy.

Last year has been particularly bad for crop cultivation in the state.  Cotton, for instance, has brought in substantial loss to farmers. As per agriculture minister Pandurang Fundkar, about 83% of farmland under cotton cultivation in Maharashtra has been ravaged by the pink bollworm attack. This again puts the onus of survival on the farmers, while the government and private suppliers get busy with the blame game. A compensation has been declared, but how many of these affected farmers actually receive the compensation they were promised remains to be seen.

What is the long-term measure that will ensure that farmers don’t have to take to the streets again? K.J. Joy offers one. The idea is to push for agro-industrial development in rural areas, he says. "Today, sugarcane cultivation is the only profitable option because of the strong lobby it enjoys. Sugarcane requires a lot of water, so ideally it should not be the major crop coming out of Maharashtra. But farmers are forced to take it up because it has stable price and a value addition potential due to the possible setting up of sugarcane factories. Now if you can provide such infrastructure for crops like millets, or jowar, then farmers are likely to move away from water intensive crops like sugarcane. This will greatly reduce the stress on already minimal water resources of Maharashtra, while making crop cultivation pattern more inclusive and less expensive," says KJ Joy.