Sad state of affairs of Garment workers in Bangalore 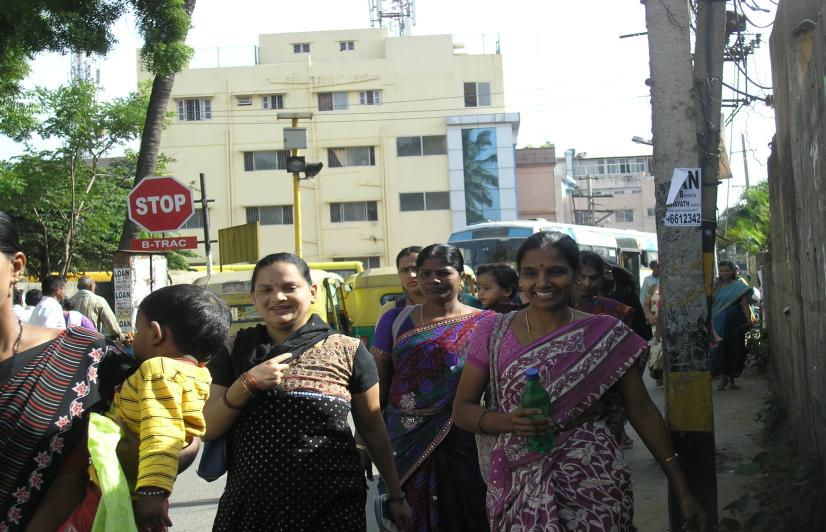 While Bengaluru's garment units are known to churn out apparels for top fashion brands, what's little known is how much they oppress and exploit the women lured by the promise of a job.

For one, they are made to work even when they are sick. Allegedly, many are hired when they are minor. They have to stay in the company hostel, which virtually places them under confinement. They are not allowed freedom of movement. They are herded to the factory and back every day under strict watch. Some employers have outright forbid communication with the outside world; mingle at the risk of getting the sack. They are not even entitled to their off days, as it all depends on the whims of the employer. Maternity benefits? None, so they quit job when pregnant.

According to an estimate, India's IT capital has about 1,200 garment units and about four lakh garment workers. Shahi Exports, Gokal Das Exports, K Mohan & Co Exports and Arvind Ltd Exports are only a few among the many that hire migrant workers. These companies manufacture apparel for brands like H&M, Ralph Lauren, Gap, Tommy Hilfiger and Van Heusen, among many others. The conditions under which they make their employees live are unenvious. The India Committee of the Netherlands had brought out a detailed report on their plight in January 2016, highlighting how these women have learnt to grin and bear it for the reward of making a few bucks at the end of every month.

“They make us work whenever they want and even force us to work when we are unwell. I had dengue fever, I was ill but I wasn’t allowed to take leave,” Janvi, an employee of Shahi Exports who gave only her first name, told 101Reporters. She started working with the company in August 2015. Oh, she is only 15 years old.

She said that back home, her family is under the illusion she's leading a happy life in a big city. They have to pay medical bills themselves, which cripples their ability to send money back home when they fall ill. She alleged that girls from Odisha are being taken for granted in these factories, but they have no choice. "I don't want to go back [to work], but I'm helpless," she lamented.

Janvi wasn't the only minor this reporter spoke to. Mamtha Augusti from Odisha was also 15 when she started working with Gokal Das Exports three years ago. She said while the company does provide them with a hostel, there are no fans in the room. They have to buy it themselves. After spending on food, water, electricity etc, they get to save very little to send back home.

How they are hired
These garment units have recruitment departments in different districts of Odisha and Madhya Pradesh. A factory representative visits the villages in these districts with brochures and promise of a steady income. About 30-50 girls from each village attend the three-month training at the district centre. It's at such centres that fake age certificates are made for girls less than 18 years old.

Lakshmi Behera, 20, has been working with Gokal Das Exports for the past five years. She narrated how one Ramakanth from Vikas Appraisals Training Centre in Ganjam district in Odisha had come to her village and talked families into sending their girls to work for garment units in Bengaluru. Lakshmi noted that though the likes of her had decided to take up the work solely for money, they barely to get save any owing to the high cost of living. She said she manages to send Rs10,000 home once every three months. She described how half of their 30-minute lunch break is consumed by the elaborate process of closing their machines and getting to the canteen alone.

It's a tough life
Sonali Bhoi, 18, works in one of these garment units with her younger sister. Her younger brother studies in a primary school back in her village. She rued that she gets to go home only once a year, that too for a week or two. She said availing of leaves is tough and requires approval of three managers. The warden has the authority to cancel the leave if they had taken a day off recently. She said hostel rules are very strict.

"We must be at the hostel by 7 pm. If we are late, they verbally abuse us. Sometimes, I have cried too," she meekly confessed.

The warden of Chandrika building, a hostel that houses employees of Gokal Das Exports, while refusing to give her name, claimed that every room in her hostel has a fan and a TV. She said her hostel gave its dwellers a lot of freedom. She informed that while many girls living there are from North Karnataka, most of them are from Odisha. She credited the girls as cooperative, saying that it made her job easy.

The warden's younger sister, Lakshmi, who gave only her first name, lives in the same hostel. Speaking with 101Reporters, she conceded that the work given to the girls from Odisha is exhausting indeed. She said she sometimes felt sorry for them. Also, she said hostel rules are much stricter for Odisha girls since they don't know the local place and the language. She said if these girls are not back in the hostel by 7 pm, strict punishment is in store for them. She refused to tell what the punishment is, though.

Cut-off from the world
During these interviews, 101Reporters found out that Shahi Exports and Arvind Ltd Exports have strictly warned their migrant workers not to interact with outsiders. In fact, these companies have told their employees that they would lose their job if found talking to any outsider. In hostel, they are threatened that if they don't return in time, they will be sent back to their village. These intimidation tactics ensure that these young women are cut off from the garment workers' union and trade activists too. The pressure often gets to the young women and some quit the job without even waiting to collect their pay.

While many spoke about verbal abuse at the factory and the hostel, they did not report any instance of sexual harassment. Nor did they recollect any suicide owing to the pressure. These young women draw a monthly salary in the range of Rs6,000-Rs8,000. They are not aware if any other financial benefits (like provident fund, gratuity, pension etc) even exist. At its whim, the factory makes them work even on national holidays and bandhs. While they are taken to clinics in case of injury at work, they are not given any compensation. There is no grievance redressal mechanism and they are pretty much at the mercy of their employer.

A member of the Garment and Textile Workers' Union who didn't want to be named said they were aware of the plight of migrant workers. He said they were tying to get in touch with the agencies that conduct training in these young women's villages. Also, he informed that they have sent a notice to Shahi Exports, asking it to give a report on the condition of migrant labourers. He said similar notices would be sent to all the garment units. Also, the union plans to regularly check their living condition.

T Srinivasa, joint labour commissioner, Karnataka, told 101Reporters he was not aware of the issue. He asked this reporter to furnish all the information so that he could draft a plan to rescue the women.

The factory owners could not be contacted despite repeated attempts.