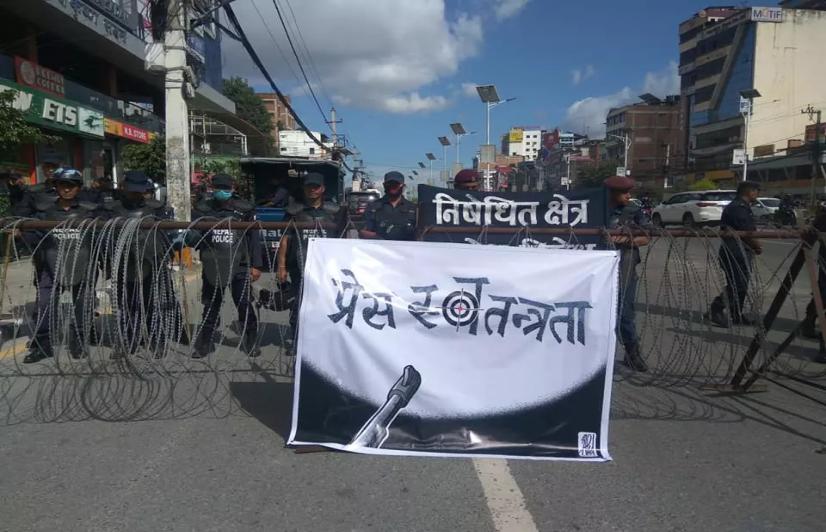 ﻿Journalists in Nepal are up in arms against the new Civil and Criminal Code introduced by the national government in August as it curbs their freedom by making collection and publication of information, particularly of public figures, punishable.

Scribes across the country have started coming out on the street in protest, starting from a sit in near the Parliament last Friday.

While the new Code, also known as Muluki Ain 2074 which replaced the 55-year-old laws of the nation, was praised to be progressive adhering to the modern society, few sections the society, including journalists, have expressed their concerns.

The protest, under the banner of Federation of Nepali Journalists (FNJ) -- an umbrella institute for journalists in Nepal, was joined by over 100 scribes. The new Civil and Criminal Code introduced by the government of Nepal on 17 August makes publishing private information, recording audio or taking pictures without permission a punishable offence with upto three years in jail or a monetary fine of Rs 30,000 in Nepali currency (around $270). According to the new Code, any content which damages the reputation of an individual directly or through sarcasm is also subject to punishment.

Rajesh Mishra, news co-ordinator with the Kantipur Daily who is leading the protest, says this is an attempt to silence the press and the new Code will make it very difficult for journalists to practice their duties for the people.

“We cannot take pictures at public places now without permission and cannot record audio or use tools of journalism at work. This will qualify us as criminals and a journalist may have to face consequences… this is nothing but an attempt to silence the voices,” says Mishra, adding that the new Civil and Criminal Code is bound to prove a hindrance to the practice of journalism in Nepal and they will protest it until the government changes these clauses.

The new Code prohibits releasing of private information, satirizing or disrespecting government officials, and taking photos of individuals. Additionally, Section 293 states that those found listening to private conversations and recording it without authorization will land in jail for two years with a fine of Rs. 20,000. Also, Section 295 states that anyone found distributing, circulating, and taking photos of others without their consent will be punished with three years jail term and a fine of Rs. 30, 000.

Ram Kumar Kamat, news editor with Nepal’s leading English daily, The Himalayan Times, says the protest against this new code has got massive support from journalists across the country.

“The government should consider journalists’ demands on priority,” says Kamat. He adds that while the government talks of freedom of press on the one hand, it introduces draconian laws in the name of revamping old ones to suit the present times.

“The government can use this Code as a bargaining power in the future. This will make any journalist scared in writing any story in future,” Kamat says.

Government on back foot

Gokul Prashad Baskota, minister of State for Communications and IT, says that all the laws, including those dealing with the Press, have been formulated anew. “We are looking forward to improve the law with the main aim for this amendment being ‘freedom with responsibility’.

“We are ready to hold talks with journalists protesting against this. We do not have any problem with the press or freedom of the press, but the journalists who are protesting this should have consulted us before resorting to protest. The step has been taken to fight fake news, mission news and deal news,” the minister says.

Baskota says he comes from a journalistic background and is well aware of press freedom. But, “the scribes should know that the government will have to move a bill in the parliament for the amendments in the Code. FNJ should at least talk to the government regarding this,” he adds.

Gajendra Budhathoki, news editor of Karobar Daily, does agree with the need to update the old laws, but says the new Criminal Code, specifically regarding press freedom, is against Nepal’s constitution. “Since the 2015 Nepal constitution mentions the provision of press freedom and right to information, the new Code is a deliberate move to undermine the authority of Nepal’s constitutional provisions. It took four years to write the Criminal Code, but it is up to the Nepal parliament to amend these laws and bring them on par with the constitutional provisions,” says Budhathoki.

Budhathoki, however, was not too happy with an atmosphere of fear and rumours around the new Criminal and Civil Code. “No one is aware they can go to the court. If someone files a petition in the Supreme Court against the provisions of the Criminal Code, the SC is likely to approve it,” he explains.

There’s a hope for Nepal’s free press, after all.