Growing Chinese military support raises concerns in Nepal and beyond 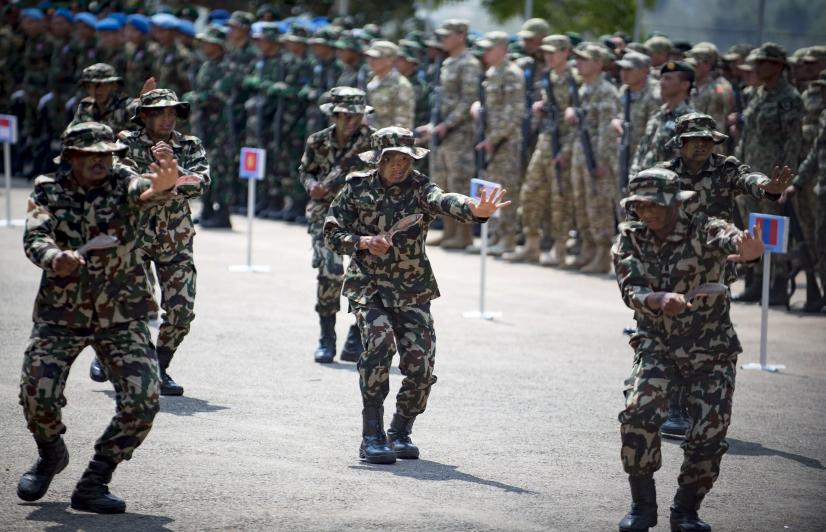 Kathmandu, Nepal: That Nepal is cosying up to China for its defence needs has been clear over the last 10 years, and more recently last month, when China pledged assistance worth Nepalese Rupee (NR) 2.5 billion for five years to the nation’s Army for humanitarian and disaster relief equipment.

For Nepal, a nation traditionally closer to India and the US for military engagements, it is a trend that should be worrisome, for China will look to extract its pound of flesh when the time comes.

China’s latest aid was given under a Memorandum of Understanding signed by Nepal’s Defense Minister Ishwor Pokhrel and his Chinese counterpart Wei Fenghe. According to officials, the pact allows China to increase its financial support to the Nepal Army by almost 50 per cent.

As a former senior army official of Nepal pointed out, “nothing comes for free”.

There are already concerns that such external support to Nepal’s military and other security agencies could eventually make them "dependent" and "heavily influenced" by others in the long run. Strategic affairs experts argue that this should be immediately stopped, as they come with huge security implications for Nepal.

An existing example of such reliance on another nation – and its ensuing costs - is Saudi Arabia, a nation whose military has been working in tandem with the US since after the Second World War. Such is the apparent influence of Uncle Sam on the Gulf nation today that President Donald Trump recently declared Saudi Arabia and its king would not last “two weeks” in power without American military support.

The US has also been pressuring Saudi Arabia, which heads the Organization of Petroleum Exporting Countries oil cartel, to increase oil output in the face of shooting crude prices and because the US midterm elections were looming.

Closer home, China has been bolstering its influence and soft power on neighbouring Pakistan in much the same way, by deepening military ties, offering aid and getting into economic engagements.

Nepal did not have meaningful military engagements with China as such except for the purchase of some anti-aircraft guns from the nation way back in 1989. Then, a furious New Delhi had resorted to harsh economic sanctions against Nepal for months over the arms purchase, so much so that the Nepalese leadership cautiously avoided military relations with China even after the restoration of the democratic system in 1990.

It was in December 2008 that the first military cooperation between the Nepal Army and Chinese People's Liberation Army (PLA) began, after Nepal’s then-defence minister Ram Bahadur Thapa signed an agreement in which China offered US$2.6 million for the modernisation of Nepal’s Army.

During the visit of PLA Chief General Chen Bingde in 2011, China provided military aid worth US$7.7 million to the nation. Since 2008, China has also increased Defence College seats to Nepal Army officers and increased the frequency of visits of the two armies.

Besides support to the army, China has boosted financial and other forms of support to the Armed Police Force (APF) that guards the Nepal-China border and Nepal Police. China has also built a state-of-the-art APF Training Academy in Matatirtha in Kathmandu at a cost of NRs 3.6 billion, as per the agreement reached during the visit of Chinese State Councillor Yang Jiechi to Kathmandu in 2011.

Former ambassador and foreign policy expert Dr Dinesh Bhattarai, who also worked as an adviser to late Prime Minister Sushil Koirala and former Prime Minister Sher Bahadur Deuba, believes that what is happening is not good for Nepal.

"The army remains the most trustworthy institution for people in Nepal. But the way some countries are trying to influence it through various support measures will likely put its credibility in question," said Bhattarai, a career diplomat serving in the Ministry of Foreign Affairs for decades.

Experts also wonder why military support is being received even when it can be met by Nepal itself. "Nothing comes for free. It is important to assess the implications of such support before receiving it," said a former senior Nepal Army official, asking not to be named. "Our government is also to be blamed for this as it has failed to meet even basic logistical demands of the army."

There are equally serious concerns over the likely dependency of security institutions on other countries. "Such support has to be routed through the Ministry of Foreign Affairs. It not only increases dependency of security agencies on others, but also has security implications for the country in the long run. They need to be carefully analysed," said Bhattarai, who keeps close tabs on geopolitical and strategic issues in the region.

Security and strategic affairs expert Geja Sharma Wagle said India, US and UK began supplying military logistics and arms to Nepal after the start of the Maoist armed insurgency - apparently to increase their influence.

“China also began pumping in its support after 2006. Now there is rising competition among India, China and the US to provide military supplies to Nepal. This undeclared competition is not in the interest of Nepal,” he added.

Wagle further argued that support measures have significantly increased Chinese clout within security agencies, bureaucracy and political circles over the years. Although senior government officials would not speak about it, media reports suggested that Nepal decided to skip the Bay of Bengal Multi-Sectoral Technical and Economic Cooperation (BIMSTEC) military drill held in India in September, apparently under pressure from China.

For every argument against such external aid and influence, there are others who warn against crying wolf.

When it comes to India, Nepal has long been receiving assistance from the nation for modernisation of its army through provision of equipment and training. According to the Indian External Affairs Ministry, about 250 training slots are provided every year for training of Nepal Army personnel in various Indian Army institutions. The two armies have also been conducting joint military exercises in each other's country.

Similarly, the US has been providing training and logistical support to the Nepal Army for ages. The nation had some time ago announced provision of four Sky Trucks worth US$ 35.5 million to the Nepal Army to help in aid and rescue efforts during disasters. Government officials said they are expected to arrive in Kathmandu by 2020. Similar support to security agencies in Nepal has come from some other countries as well.

Former UN ambassador from Nepal Jayaraj Acharya insisted that it is not good to generalise all such support as harmful. "Some of these aids have increase efficiency of our security agencies. Government bodies need to carefully analyse the needs and their implications before receiving such assistance. It is good not to take assistance if it can be met with resources at our disposal," said Acharya.

However, the case is different with China - a nation with whom Nepal’s military relations changed after 2006, when the 240-year-old institution of monarchy was abolished. Since then, it has deepened military ties with Nepal through various kinds of assistance, both in cash and in kind, and this was no more evident than when Nepal and China held their first-ever military exercise to combat terrorism this April amid strong displeasure from New Delhi.

On Beijing’s recent assistance of NRs 2.5 billion, Nepal Army spokesperson Brigadier General Gokul Bhandari said they are yet to work out what equipment and support to receive from China to boost the army's capacity to respond to humanitarian crises. "The support is being provided for humanitarian and disaster relief equipment. We are yet to work it out," he said.