As Hasina returns for fourth term as PM, opposition in Bangladesh fears death of democracy, attack on dissent 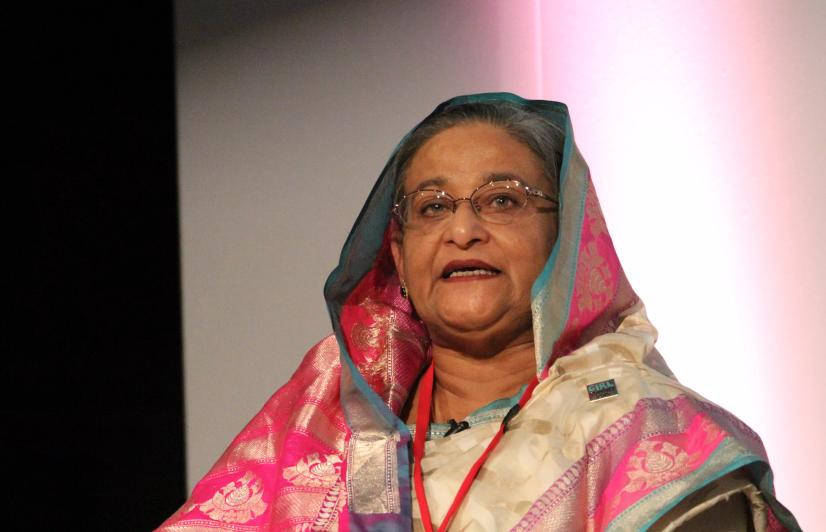 Kolkata: The election sweep of Awami League, led by its charismatic leader, Sheikh Hasina Wajed, who was elected to her fourth term, comes as no surprise. Hasina on January 7 took oath as the Prime Minister leading a 47-member council of ministers.

The ruling party’s landslide victory amid widespread allegations of vote-rigging in a poll fought against a new alliance led by Kamal Hossain, an Oxford-educated international jurist who drafted the country’s constitution, in the absence of Opposition BNP chief Begum Khaleda Zia, speaks of a democratic system that seeks to thrive amid extremity. Hasina’s Awami League-led Grand Alliance, a conglomeration of 14 parties, won 288 seats out of 300 seats, while the Bangladesh Nationalist Party (BNP)-led Jatiya Oikya Front suffered a complete rout, securing only seven seats.

Opposition to stay away from regime

Experts mainly attribute Hasina’s victory to her party’s success in outsmarting its Opposition, mobilised by Kamal Hossain, once ally of her late father Sheikh Mujibur Rahman, though they are critical about the ruling party’s strong-arm tactics and soaring aspiration to grab power.

Newly elected members of parliament, including Hasina, were sworn in on January 3, but the seven Opposition members stayed away, saying the results were rigged and demanding fresh election.

Though allegations of electoral malpractices are rife, but these factors took some sheen off the victory that has enough geopolitical significance.

“Her trick mainly lies in putting the Opposition in disarray. She emerged as a capable leader who can address people’s fundamental needs and take the country to new heights. The contentious victory can be best explained, taking note of few factors which do not augur well for democracy in Bangladesh. For geopolitical reasons, Hasina’s coming to power is welcome; though for democracy in Bangladesh, it’s not,” Khan says.

Substantiating his claim, the academician says probably none could handle extremist elements and growing Islamic fanaticism in a country, which has often seen attacks on minorities and bloggers. “None can take the credit from her for the way she has dealt with extremist elements. It was never easy in a country which saw a surge of fanatic activities even during her earlier tenure. But that does not justify her actions this time. Will you call it an election?” Khan asks.

Growth promising, but democracy in danger

Khan, however, admits that Hasina despite being labelled as ‘authoritarian’ has been immensely successful in sailing the country through a period of crisis. He says the Islamic country’s robust economic growth, including a tripling of per-capita incomes since 2009 and an annual average growth rate above 6% in the past decade, which was the fastest in the developing world, comes into picture when one speaks about her success as a leader on whom rests the aspirations of 166 million population.

“Hasina has built a domestic ecosystem that helped steady economic growth. The country’s GDP is now US$265 billion and per capita income is US$1,620. She can claim credit for framing effective investment policy, creation of business environment and foreign investments, which paid dividends for her,” Khan says.

He, however, cautions against the regime’s taking extreme measures to contain detractors. “Credit must be given to PM Hasina for showing urgency to see the end of Islamic fundamentalism. Her firm dealing with extremist and Islamic fundamentalist forces, which killed her father, is welcome. But in the process, crackdown on civil societies and muzzling any rising voice is a not a sign of a healthy democracy,” the academician adds.

BNP senior joint secretery general Rizvi Ahmed says that this election was “unprecedented” in Bangladesh’s history. “Our stand is very clear. We don’t want to be a part of any event called by the authoritarian regime that has used all means to muzzle the democratic voice in Bangladesh. The ruling party applied every means to win the poll.”

He adds, “The huge security force, judiciary and every machinery acted on behalf of the government to ensure its victory. It’s not easy to fight against the party which is in power.” The BNP also accused Awami League of manipulating social media content.

Convenor of Jatiya Oikya Front, Kamal Hossain, also alleged irregularity and violence during elections. On January 6, he held an emergency closed-door meeting with diplomats of at least 30 countries, including USA, UK, Canada, Russia and China, and discussed the ‘future of democracy in Bangladesh’ with them.

The ‘evidences of the election violence’ were presented before the diplomats and written copies of the allegations with ‘facts and evidence’ were handed over to them.

Academician Khan says the BNP boycotted the 2014 polls, claiming that it would be manipulated. “This time, Begum Khaleda Zia, BNP chairperson, was jailed for 12 years on corruption charges and her son, Tarique Rahman, who lives in exile in London, was sentenced to life imprisonment in absentia in October last year for a plot to assassinate Hasina. There is virtually no face to show up and none to put up a semblance of fight to Sheikh Hasina. All these factors certainly show the country in bad light,” Khan says.

The BNP though looked in a shambles, Hasina has taken no chances, bringing an estimated 300,000 cases against the major opposition party and ordering thousands of its members to be arrested just before the election.

Not only the Opposition, the ruling party was also criticised for its crackdown on journalists. In August last year, an award-winning photographer, Shahidul Alam, 63, was charged for “provocative comments” made in an Al-Jazeera interview about protests that have rocked the country for more than a week.

Alam was released from prison in November after spending more than 100 days in detention in a case denounced around the world as an assault on free speech. Alam is accused of spreading propaganda against the government under Bangladeshi’s International Communication and Technology Act (ICT), a law that rights groups have decried as “draconian”. The measure is allegedly used to launch crackdown on media and repress government critics.

A law professor at Dhaka University, Asif Nazrul, admits that Hasina must be credited for Bangladesh’s growth trajectory, but says that the regime’s repressive measures, crackdown on free speech have come as a “blot”.

“Bangladesh is witnessing a sweeping change. There is sustained economic growth driven by domestic demand and exports. But that does not ensure political freedom,” he says.

The country’s intellectuals feel that Bangladesh would ultimately turn into a one-party state. “If the current trend goes unabated, it will establish the culture of impunity in the form of partisan interests,” Khan says.