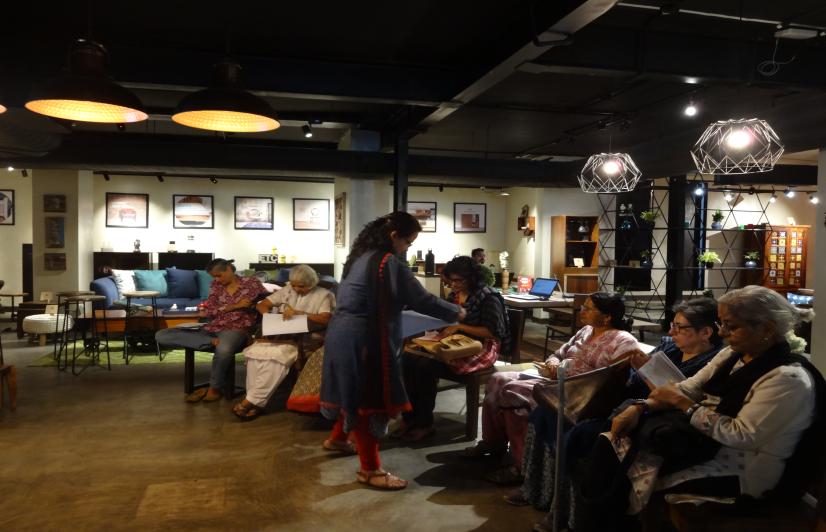 A step inside the iron gates and you are welcomed with all shades of green. Mint coloured walls with emerald green doors and windows adorn this old building in Basavanagudi that has stood the test of time. But, spend a little time here and more than the house, it would be the dwellers who will hold your attention. M R Narendra and his wife, Bindu, have been living in the historical building for over 45 years.

M N Krishna Rao, who was acting Dewan of Mysore and Narendra’s grandfather, had built the house 110 years ago in 1907. Narendra and Bindu say the door to their home is open to visitors as they love entertaining those curious about their house.

Elders in Bengaluru seem to be in control of their post-retirement lives while practicing several options to keep themselves active and engaged.

Narendra is also in touch with walking tour groups like Unhurried and Bengaluru by Foot who bring in groups of people to witness the historical marvel. Narendra loves engaging visitors as he enthusiastically apprises them about the imported tiles, his grandfather’s clock and resting chairs and his brown glass shelf filled with magazines.

On the other end of the city, in Indiranagar, Shireen Hegde, 64, gets ready to attend a workshop conducted by Silver Talkies in the city. Hegde has been associated with Silver Talkies since the past six months and has attended almost six to seven workshops related to fitness, cooking and gardening for elders in the city. “I had gone to a wedding once and there was this woman who told me about the elder’s workshops and that is how I learnt about Silver Talkies. It is such a good platform to socialise and meet people my age,” she says.

Not only have the elders in the city voluntarily chosen to stay active post-retirement, but the climate in the city, in the form of initiatives, has become conducive in adding value to the elders’ lives. Nidhi Chawla, co-founder of Silver talkies, says that they started this platform so that seniors could come together and stay actively engaged after retirement.

“Seeing my own parents in their retirement years when they did not have initiatives like these in Delhi, I decided to start Silver Talkies. Seniors live their lives a certain way, but things change after they retire and it is difficult for them to open up,” says Nidhi, narrating how she stumbled upon the idea to start this platform which caters to those aged 55 and above.

Another avenue for the elderly to explore is in the field of theatre. Vijay Padaki, founder and trustee of Bangalore Little Theatre (BLT), seeing how proactive elders’ theatre is in some other societies (notably in the US) and how neglected the elderly are in this country, realized the need to develop a programme that would cater to the elderly population.

Vijaylaxmi Chari, a theatre coach and a storyteller is spearheading the elders’ programme at BLT. She says that the programme started about three years ago and to prepare the material for the eight-week programme, she got in touch with people in Portland, Oregon who had a similar programme, to understand what would work best for senior citizens.

Each session lasts for about two to three hours where they focus on theatre-based exercises. “Firstly, we focus on the body and they loosen up with exercise and folk dance. Then, we focus on creativity where there are improvisation and scene games and we follow it up with a session where the elders socialize,” says Chari.

The theatre workshop is open to people aged 55 and above with 30 to 40 people in bigger groups and about eight to 10 people in smaller groups. The programme hasn’t really matured into a full fledged production yet since it is still in a nascent stage. However, they are looking at play scripts and hope that they soon produce a play, asserts Padaki.

Chari says that the best things about these classes is that the elders look forward to them. “Elders take on responsibility and there is a constant flow of conversation. Friends who come together, rediscover each other and nostalgia fills in with the sound of laughter. What can be better than that?” she asks.

Nidhi says that the biggest challenge with elders is loneliness. “There was this lady who came up to me in the last workshop and said to me that she feels really happy when she comes to these workshops as she doesn’t have anyone to speak with at home,” she said.

For Kaushy Lal, who is on her first visit to the workshop, finding such an avenue to socialize with people her age was not easy. “I had been looking to get engaged in such workshops but I couldn’t find any as I am not very internet savvy. So, now that I am here, I am definitely going to attend frequently,” she says, as she signs the membership form.