What Kashmiri Pandits found upon their return to the Valley: Unkept promises 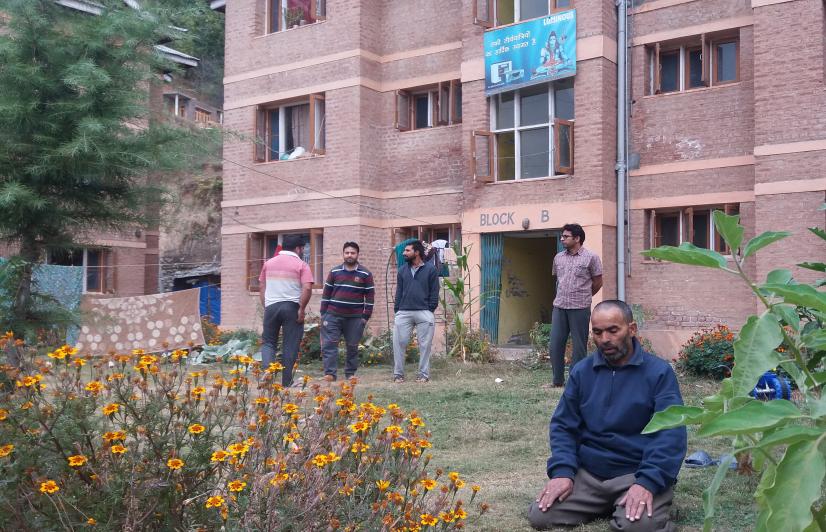 What Kashmiri Pandits found upon their return to the Valley: Unkept promises

Ranjan Jyotshi, 44, a migrant Kashmiri Pandit returned to the Valley in 2010 under Prime Minister's Return, Relief and Rehabilitation Scheme. Jyotshi took up a job in the department of social welfare and was posted in Anantnag district’s Pahalgam. Before migrating to Jammu in the 1990s, Jyotshi’s family lived in Bijbehara town of the district.

Except for the job, Jyotshi rues that every other promise of the government turned out to be “fake”.

"Does it mean rehabilitation?" Jyotshi asks, "We are living with 5 to 6 families in a single flat. How can I bring my family? Where will they stay?"

For nine years now, Jyotshi is living away from his family in the transit camp in Mattan which has 16 flats with three rooms each. One of the apartments is occupied by the Central Reserve Police Force (CRPF) and another hosts the relief and rehabilitation office. The remaining 14 flats are shared by 96 migrant Pandits.

In 2008, the Indian government announced a Rs 1,618 crore PM package for Kashmiri Pandits who had migrated from the Valley in the 1990s to Jammu, Delhi and other parts of India. As part of the package, till now around 3,000 migrant Pandits who returned to the Valley in 2010 and 2012 have got state jobs. The victims say they were also promised with other facilities including family accommodation, a continuation of cash relief for the first two years, scholarships and schools for their children.

Pandits say the PM package proved to be an eyewash. The transit camps in Vessu, Mattan, Haal, Sheikhpora, Ganderbal, Nutsuna (Kupwara) and Baramulla are short of space to accommodate all Pandits who returned to the Valley. Many of them are forced to rent apartments.

Besides less space, Pandits say most of the transit camps lack basic facilities like water and electricity.

During his visit to the Valley earlier in the month, Prime Minister Narendra Modi had raised the issue of Kashmiri Pandits. Modi said the current administration in the state, under President’s Rule, has started construction of transit accommodation at Vessu in southern Kashmir and Singhpora in northern Kashmir.

"We want a dignified return of Pandits. Those who want to return will be provided full help,” Modi said. “Our government is working hard in the direction of the safe return of Pandits under the PM package.”

Like Jyotshi, Sunny Raina too had returned to the Valley in 2010 but can’t bring his parents from Jammu because of lack of space in the Vessu camp where over 430 people share 134 quarters.

“During elections, politicians raise our issue just to gain vote bank. We have been desperately waiting to bring our family to the Valley but where will I accommodate them? Presently three families share every quarter,” said Sunny.

In Vessu, the government has built seven new buildings and all of them are occupied by CRPF and BSF. “These buildings were constructed in our name. We have told the government many times to shift the forces to some other place. We will now give them in writing that we don’t need any security,” Sunny said.

During the 2016 unrest, Pandits from Pulwama transit camp returned to Jammu. They feel that the camp is not safe anymore as some miscreants had even pelted stones at their houses. Although some of the pandits later joined offices but chose to stay in rented apartments.

“We requested the government a number of times to shift our transit camp to a safer place. We told them that the Pulwama camp is located in a vulnerable area but nothing happened,” said Sanjay Kumar Bhat who now travels 30 km every morning to reach office.

M.L. Raina, Relief and Rehabilitation Commissioner of Jammu and Kashmir, said around 3,000 pandits have returned to the Valley since 2010 and the government had allotted addition Rs 920 crore for their rehabilitation in 2015.

“We are upgrading the rehabilitation program but most of the Kashmir remains under lockdown. In most of the transit camps, sharing has been done away,” Raina said.

“Everybody will get a separate flat, but our priority is security,” Raina added.

When contacted, the People’s Democratic Party said Mufti Mohammad Syed had started the initiative for the dignified return of migrant Pandits. “From the beginning, we are against the ghettoisation of Pandits. We want their dignified return to the Valley,” said Najmu Saqib, additional spokesperson of PDP. “Pandits are part of our Valley. If we want to rehabilitate them, we need to reconcile them with the society.”

Hitting out at the BJP, Saqib said polarisation in other states has a direct impact in the Valley and creates hurdle in rehabilitation efforts.

“It is our mission to ensure the safe return of Pandits. But having separate colonies defeats the concept of reconciliation,” said Saqib. “During our tenure employment package was successfully implemented and in future complete rehabilitation will remain our priority.”

The other major political party of the state, Jammu and Kashmir National Conference, said when the Omar Abdullah government was in power in 2010, the first group of Pandits returned to the Valley. They said it was the NC government who built transit camps for Pandits.

“We have never supported the separate colony concept and will not support it in the future also. But we want that every Pandit should return to their respective places from where they have migrated in 1990s,” said Imran Nabi Dar, party spokesperson. “Pandits should also feel they are safe in Kashmir. We have other minorities like the Sikhs living here.”

Imran said NC already has a package for rehabilitation of migrant Pandits in their memorandum.

The other two parties BJP and Congress couldn’t be reached for their comments on the issue. As and when they respond to the call, this copy will be updated.

Pandits recall having received a warm welcome from their Muslims brothers upon their return to the Kashmir Valley. Ranjan said when he came back in 2010, he stayed with his friend for a year.

“Before returning to the Valley I was under fear but the love and support that I received from my Muslims brothers has changed my mindset,” said Sunny. “It is because of local people I am staying here, otherwise the government has deceived us.”