Tourists flock to world’s tallest statue amid protests by locals 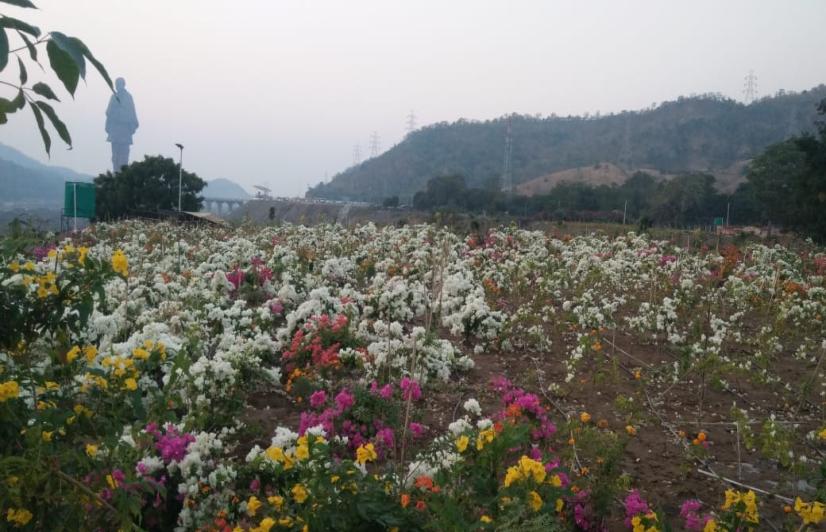 Thirty-five-year-old Ganpat Tadvi, a local tribal man, runs a road-side tea and snacks stall close to the Statue of Unity. Since the inauguration of the world's tallest sculpture, there has been an influx of tourists in the area, and as a result, Ganpat’s average daily income has more than doubled. The statue is located on tribal-dominated Sadhu Bet, an island on the Narmada river in Gujarat, the home state of Prime Minister Narendra Modi.

Happy with their newfound prosperity, owners of close to 100 stalls near Sadhu Bet admit the spike is due to an increase in tourist footfall. Interestingly, though content with the improvement in their lifestyles, Tadvi and other tribal in the area are now protesting against further expansion of the Statue of Unity project.

The 182 meter-tall statue of Sardar Vallabhbhai Patel -- a prominent face of the Indian freedom struggle -- was constructed at a cost of approximately Rs 3,000 crore and dedicated to the nation on October 31, 2018, by the PM.

Built close to Sardar Sarovar Dam in Narmada district, the project includes spots like ‘Valley of Flowers’ on the nearby banks of Narmada, and a 3-Star hotel. The plan to expand it further includes construction of government guest houses for all the Indian states and Union Territories in Kevadiya.

On January 19, Haryana Chief Minister Manohar Lal Khattar had to face a strong protest by local tribal when he visited Kevadiya to perform the ground-breaking ceremony for his state’s guest house. After stone pelting and scuffle, police detained 30 locals and later booked 11, including tribal leader Praful Vasava and activist Lakhan Musafir under charges of rioting. According to police, all 11 people have now gone underground and have applied for anticipatory bail.

Prominent tribal leaders from the area have warned the Gujarat government to intensify agitation if the land dispute is not settled soon. Octogenarian tribal leader and president of Adivasi Samanvay Ekta Samiti, Amarsinh Jat Chaudhary, says that if the government did not stop pressure politics with tribal and continue to violate the constitutional provisions, a complete bandh would be organized and not even an inch of the tribal land would be allowed to be used for construction of related projects.

Ganpat, who is also throwing his weight behind the protest, says the locals support these agitations in fear that their 'newfound prosperity' could prove to be temporary if bigger hotels and other projects come up in the area. Solidarity with these protesters was also the only way to save their land and get better compensation.

“Before the statue's inauguration, tourist inflow was minimal in the area. The only point of attraction was the Sardar Sarovar dam, which occasionally overflowed during the monsoon season. My daily income was Rs 2,000 earlier, but after the statue’s inauguration it has gone up to Rs 5,000 to 7,000 a day. I am happy about it,” he admits.

According to Ganpat, the local tribal have three major reasons to protest – business, land and culture.

“If the project is expanded further, big hotels will open and it will bring in big players. They will create their monopoly in sometime and leave no space for us to operate,” he rues.

“Also, to build more infrastructure for the project, they will require more land which will result in people of Kevadiya losing more land. Another thing is that we tribal people love to keep our culture intact but the heavy influx of tourists will affect that also,” Ganpat argues.

Fearing that local girls could be lured into prostitution with more tourists thronging the area, Ganpat says that the government should not allow big hotels in the area and the tourists should not stay overnight. “People who come from outside will drink (liquor -- in this otherwise dry state since its inception) and dine (non-veg -- in this largely vegetarian state) here and the whole culture of our locality will be disturbed. If they want to see the statue they should see it and go. What is the need to stay here,” he says.

Govind Tadvi, the Sarpanch (elected village head) of nearby Vaghodia, which was among six villages affected by the project, says that proper compensation for lands taken for construction of a six-lane approach road and other facilities has not yet been paid. “The government has not given us land in lieu of land as promised. It asks us to go to faraway places deprived of basic amenities. Despite promises of jobs to locals, only a few have been engaged and that too, on contract basis. The ones who were protesting genuinely for the land compensation were being beaten up and booked. This is not fair,” he says.

“All we want is land and fair compensation and assurance that we won't be driven away from our ancestral place in the name of development,” he adds.

Tribal land rights and environmental issues activist Anand Mazgaonkar, who has been working in the area for over three decades, also supports the protests.

He says that the land in Kevadiya on which guest houses and other such structures have been planned was acquired by the government way back in 1960s for construction of Narmada dam. However, the dam was built at some distance and the land remained unused and the government neither took its possession nor returned it to owners.

As per the provisions of the Land Acquisition Act and The Right to Fair Compensation and Transparency in Land Acquisition, Rehabilitation and Resettlement Act, land should be returned to the owners within five and 10 years, respectively, Mazgaonkar says.

Bringing in another aspect of land acquisition in tribal areas, he talks about Fifth Schedule areas. “The government is grossly violating the rights of tribal in this area. Not even a single inch of their land can be taken without the prior permission of the Gram Sabha as per the law as it was a Schedule-V area,” says Mazgaonkar.

Narmada District Collector R S Ninama says the government could use the acquired land for development purposes as per the requirements and that it was not possible to return the land now. He says the land acquisition in six villages, including Kevadiya, was completed way back in 1961. Later, on the directions of the Supreme Court, those affected by the project were offered equal land in the command area of Narmada project.

“We are offering them land in command areas in Vadodara, Chhota Udepur, Ahmedabad and Bharuch districts. But they want to live here. We also don't want them to leave this place,” says Ninama.

As per the official figures, so far, a total of around 8.12 lakh tourists have visited the statue adding Rs 19.18 crore of revenue to government coffers through ticket sales.

However, Mazgaonkar says, the flow of tourists is not natural. Explaining, he says, “The crowd is also not all of tourists," but being managed artificially. "The government was compelling schools and other institutions to bring children and other visitors. It is also holding meetings and conferences here just to increase the numbers but those cannot be considered as tourists.”

Bharat Pandya, BJP’s state spokesperson for Gujarat, says, “Even the Supreme Court admitted that the Gujarat government’s compensation and rehabilitation offers are some of the best in India. Since the Statue of Unity is of Sardar Patel, the great unifier of India, all the states should have representation here. Congress and its new ally Bharatiya Tribal Party are misleading innocent tribal from the area to serve their own interest.”

Congress MLA from Dasada in Gujarat, Naushad Solanki, alleged that the government was trying to make a mockery of tribal people. “On the one hand, large number of tribal in the area are still deprived of basic amenities and two square meals, yet the government is busy setting up five-star hotels and guest houses. This is nothing but insult and mockery of innocent and poor tribal people,” Solanki says.