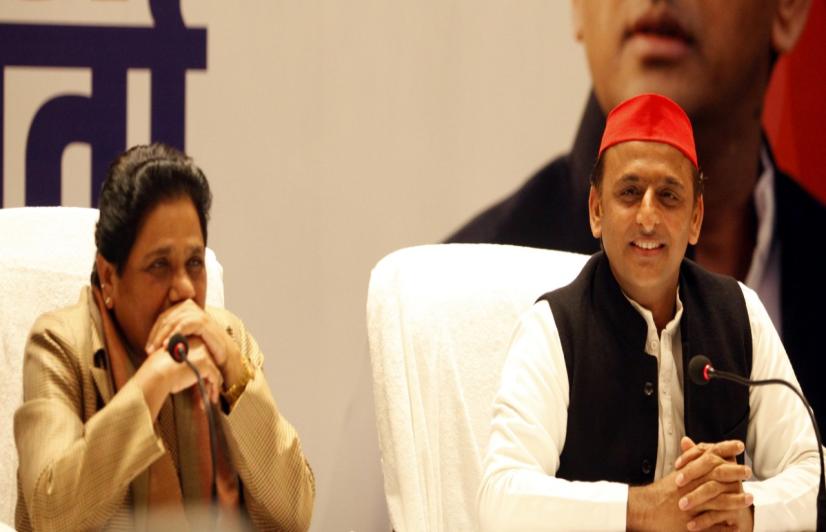 Lucknow: The Bahujan Samaj Party and Samajwadi Party, two antagonists in the political sphere of Uttar Pradesh, the northern Indian state that sends maximum members---80---to the Lok Sabha, announced on Saturday that they have joined forces to weaken the BJP’s chances of return in the 17th Lok Sabha term.

With the BJP gaining control of the state as well two years after the Lok Sabha polls, the rivals have realised that their political relevance depends on uniting at the hour to defeat the common competitor that aims at wiping them out from the state.

Addressing media persons in state capital Lucknow, BSP chief Mayawati said the two coalition partners will contest on 38 seats each while two seats have been left for other probable coalition partners. Reports have suggested that the third partner in the coalition could be Ajit Singh’s Rashtriya Lok Dal (RLD), but the two leaders shied from naming any third probable partner. Mayawati added that the SP-BSP coalition will leave Amethi and Raebareli---two Congress bastion constituencies---in order to let the Grand Old Party enjoy its edge on these seats.

Terming the presser an “historic event” Mayawati said it “will give sleepless nights to Narendra Modi and Amit Shah”.

“I have cast aside the guest house episode of 1995 to form this alliance in the benefit of the nation,” she said, recalling the bitter feud between the SP and BSP that resulted in Mayawati withdrawing support from the then Mulayam Singh government. She was attacked and abused by the SP legislators and workers at state guest house in Lucknow on 2 June 1995, and was reportedly, escorted to safety by BJP legislator Brahmdutt Dwivedi, who used to contest Farrukhabad assembly seat. A week after that incident, Mayawati offered support to BJP and became the first Dalit woman chief minister of an Indian state.

However, 23 years down the line, political compulsions have brought the two nemesis together against the saffron front that is increasingly pushing the Hindutva agenda not just in Uttar Pradesh but across the country.

Calling the coalition an alliance of frustration after facing big defeat in last election, UP BJP spokesperson Rakesh Tripathi said, “They both are corrupt. They have many cases of corruption against them and this is nothing but a result of their frustration.” The Yadav family could manage to win only five seats (last year) when their family was united, but now Shivpal is not with them, said Tripathi, adding, “So, you can easily think what results are going to come.”

“People of the country are unhappy with the BJP because of their fake promises and their arrogance. This is not an alliance of two parties, but the voice of Dalits, downtrodden, muslims and backward people,” said Mayawati, highlighting the demographic target of the coalition.

“We have fought some Lok Sabha and Vidhan Sabha (State Assembly) elections together and defeated the BJP. Congress contestants were defeated badly in those elections,” she said, recalling the coalition’s success in the Gorakhpur and Phulpur by-elections, and went on to criticise the Congress for not having worked towards the welfare of the poor and the marginalised despite ruling the country and the state for decades.

“The BJP and Congress have same modus operandi and there have been scams in defence deals in both their tenure. Congress was thrown out of power over the Bofors deal and now, we think the BJP will go out over Rafale deal,” said the BSP supremo.

Adding that the present political scenario is more dangerous than the Emergency, Mayawati said that the BJP, with an intention to break this alliance, got Akhilesh probed by the CBI in illegal mining case, but BSP is with SP, and now the bonding between two parties is more intact. “Even the money spent on Shivpal by the BJP went to waste,” she added, talking about Akhilesh Yadav’s uncle and SP leader who had led a separate faction of SP leaders challenging the nephew’s leadership within the party.

Joining the charge against the BJP rule, Akhilesh said, “The atrocities and harassment faced by women, the poor, laborers and even kids during the five-year regime of BJP is unimaginable. People are asked about their caste before hospitals treat them or police lodge an FIR. BJP has started dividing the society on communal lines and they have not even spared the gods.”

Adding that the BJP is working only to keep the big businessmen happy, the former UP CM added, “SP and BSP have decided to oust BJP from power and our alliance in not limited to the ensuing election alone.”

Emphasising that the two rival parties should be considered one force in the state, Akhilesh appealed to his cadres to consider Mayawati’s insult as his insult. “I had made my mind to go ahead with this coalition the day BJP leaders made lewd remarks against Mayawati ji,” he told mediapersons.

“As we head to the elections, BJP can try to resort to riots and violence, but we have to maintain peace and harmony among the people and protect social justice in the state,” the SP president cautioned workers of both parties.

The SP-BSP alliance could unite three powerful social groups — Yadavs, Jatavs and Muslims — on one side. Many were skeptical if the SP votes will get transferred to the BSP and vice-versa. However, the Phulpur and Gorakhpur wins show that Dalit votes indeed went to the SP; anecdotal evidence suggests that the Yadavs may be willing to shed their old bitterness and disdain and vote for the BSP.