No Fear of God 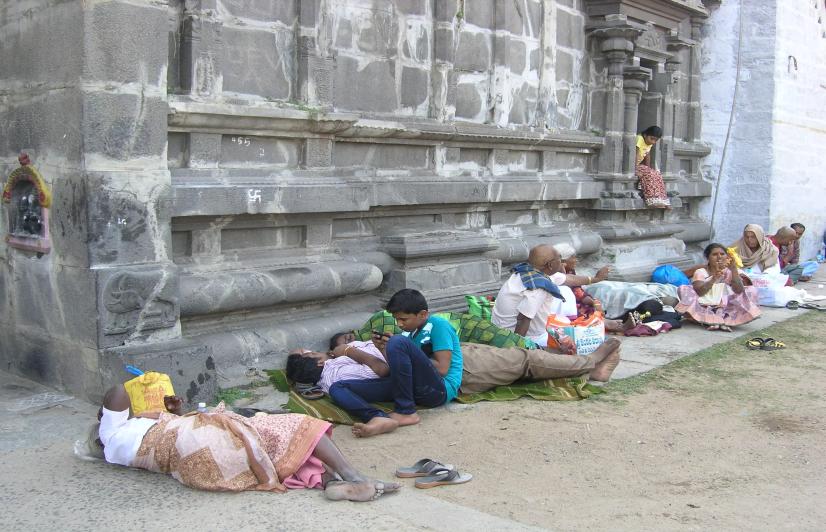 No Fear of God

Kanchipuram, Tamilnadu: The venerable Ekambareshwara temple at Kanchipuram is being desecrated by its custodians, writes Elizabeth Mani

Ekambareshwara temple in Kanchipuram, one of India’s oldest and most venerable shrines, has been at the centre of controversy over the theft of valuable artefacts. It has also faced repeated charges of mismanagement.

The latest dispute revolves around the installation of a new idol of the deity Somaskanthar, a representation of Shiva, with his consort Parvati and son Skanthan (Murugan).

In May 2015, the archakas (temple priests) and executive officer (EO) of the temple submitted a proposal to the commissioner of Hindu Religious and Charitable Endowments (HRCE) department to create a new Somaskanthar Urchavar Panchaloga idol as the original metal idol had deteriorated to the point where it could no longer be taken out in procession.

In August that year, the temples chief stapati (architect), Muthaiah inspected the original idol and determined that it was composed principally, about 75% in his estimate, of gold. “When idols are damaged, they must be made of the same material,” he decreed.

The commissioner granted permission to the EO to make a new idol at Swamimalai at cost of Rs.2,12,500, using temple funds. However, contrary to the architect’s directive, the new idol would comprise 80% copper, 12% brass, 5% gold, 2% tin, 1% silver and weigh 50 kg.

After getting Muthaiah’s approval, the EO posted a notice in the temple that December asking for donations to make the new idol. The new idol was readied and taken out in procession 4 December 2016.

According to one of them, on the day of the procession, some of the protesting devotees and a journalist accompanying them were beaten up and locked inside the temple. Suspecting that the temple management had something to hide, Dinesh A, 28, filed an application under the Right to Information (RTI) Act.

“In the RTI we asked how much gold was collected and if a receipt was made out for the same. The HRCE replied that no gold had been collected and so no receipt was issued,” he says. “But we know for a fact that the notice was displayed in the temple for almost a year and thousands of devotees donated cash and gold. They have collected more than 5.75 kg of gold.”

Subsequently, the petitioners filed a case in the magistrate court Kanchipuram against the HRCE for its failure to disclose the quantity of gold collected and used and after examining the evidence, the judge ordered the local police to file a first-information report (FIR). An FIR was filed against nine people, including the temple EO Murugesan, chief temple sculptor Muthaiah, another sculptor, Masilamani and temple priest Rajappa.

When nothing came of it, the petitioners approached A.G. Pon Manickavel, IPS, inspector-general of police, Idol Wing of the Criminal Investigation Department (CID), who transferred the case to his department for further investigation. “The investigation by the idol wing of the CID found that not even one gram of gold has been used in the making of the new panchaloha idol. Pon Manickavel himself confirmed this to us,” says Dinesh.

But the case only got more curious. An officer from the Idol Wing, who was also part of the Ekambareshwara-temple investigation told 101Reporters, “Upon our investigation, it was discovered that the newly made panchaloha idol didn’t contain any gold. And we also found that old idol which was said to be 75% gold by Muthiah Stapathi also had 0% gold.”

“When questioned, Muthaiah said the old idol ‘looked like 75% gold I cannot guarantee that’. At present, the case is still under investigation and all the 9 accused in the case have applied for anticipatory bail”.

This is only the latest in a string of scandals at Ekambareshwara temple. The temple lost its original Skanthan (Murugan) idol in 1993. Devotees have been worshiping a fake put in its place for the 24 years.

In 2015, Muthaiah Stapathi reported that “As per the information by the temple authority the Skanthan (Murugan) idol made of Panchalogam has fallen down 15 years ago and they have made another idol and kept in its place.”

But an RTI query about the idol revealed that the Skanthan idol was stolen and a complaint was filed by the temple authority on 31 March 1993 at Periya Kancheepuram Sivakanji police station.

Says Dilli Babu A, 28, an artist and RTI activist, “In the name of God the temple management is looting everything from the temple. There were almost 20 CCTVs in the temple, but none of them were working for three years and the department did nothing about it. They must have looted all the valuables during this period.”

In response to an RTI filed in February 2017, the HRCE department confirmed that, “Cameras in the temple are not in working condition for the last three years, steps are taken are taken to install new cameras and a proposal has been sent to the commissioner.”

Says Ragu Venkatesh 55, a civil contractor, “The HRCE only wants to make money. There is corruption starting from buying the pooja items to counting the donations. The department makes fake vouchers, everyone knows about this but no one talks about it.”

“If the department was really concerned about the temple, instead of making a new idol, they should have repaired the 1,000-pillar hall in the temple and cared for the 3,500-year-old mango tree, whose branches bear four different types of mangoes, representing the four Vedas in Hinduism.”

Asked about the mismanagement and corruption in the temple, V.N Palani inspector, Shivakachi police station says, “There were two cases registered at the station, the first one about a missing idol and the second one about the percentage of gold in the newly built idol. Both the cases were transferred to idol wing immediately.”

The HRCE department, Kanchipuram and the EO Murugesan refuse to comment on the claims.

Says Sundhar 82, a devotee, “Ekambareshwara Temple was built by Karikal Chola, the Thanjavur king and has been in use for the last 2,000 years. As devotees we believe there is more power in the old idol. We wanted the old idol but the authorities in the temple got the new one even after so many protests. The HRCE department is cheating us.”

The Ekambareshwra saga only underscores the scale of temple-idol theft in Tamil Nadu. That is evident from the fact that it’s the only state to create a special wing to tackle the problem. Since it was set up in 1983, the idol wing has recovered 804 stolen idols.