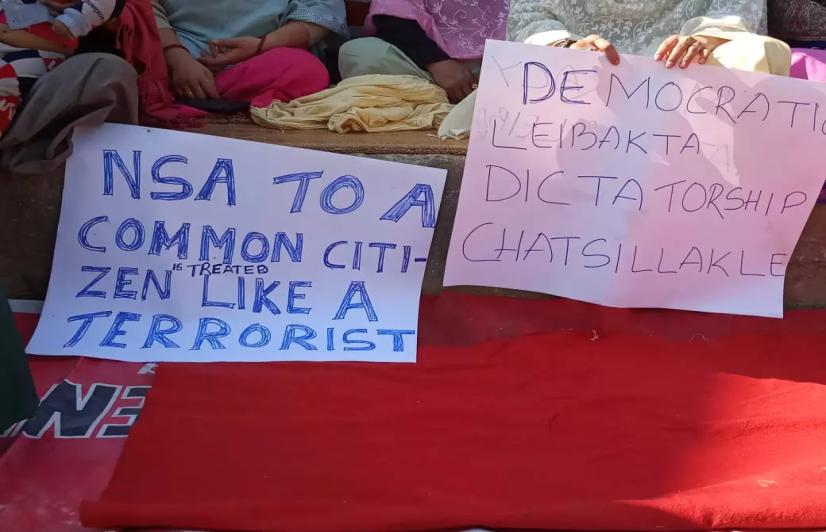 Guwahati: Hearing a petition filed by Manipur journalist Kishorchandra Wangkhem, challenging his year-long detention under the National Security Act (NSA), the Manipur High Court on Friday directed the state and the Central governments to file their counter affidavits by February 1 next year. Wangkhem’s challenge against the oppression he is facing seems an uphill battle as the apex journalists’ body in Manipur decides to look the other way by citing a standing order adopted in August days after his arrest.

Wangkhem had filed a criminal writ petition on Wednesday challenging his detention under section 3(2) of the National Security Act, 1980. On Friday, his wife Elangbam Ranjita submitted a letter to the court requesting to consider the printed statements of retired Supreme Court justice Markandeya Katju as ‘letter petition’ drawing attention to the celebrated Supreme Court verdict on Romesh Thapar versus State of Madras case and take it as a reference to quash the “illegal” order of the state government.

In his statement posted on Facebook on December 20, Katju has drawn the attention of the Chief Justice of the HC to the violation of Article 19(1) of the Indian Constitution, which guarantees freedom of expression, by the state of Manipur in detaining Wangkhem under NSA for criticising the state government and its chief minister. In his Facebook post, the retired justice has dubbed the CM N Biren Singh as a ‘little dictator’.

In the latest curb on Wangkhem’s expression of his views on social media, he was arrested on November 20, allegedly over a social media post in which he questioned the rationale of observing the birth anniversary of Rani Lakshmi Bai of Jhansi in Manipur. He argued that Manipur’s own struggle against the British rule should not be demeaned.

He was arrested from the residence of his lawyer Victor Chongtham at Khonghampat Awang Leikai by an Imphal Police team on sedition charges after an FIR was lodged against him under Sections 124-A /294/500 of IPC.

He was released on bail on November 26 after the Chief Judicial Magistrate, Imphal West ordered his release, as he was merely expressing ‘his opinion against the public conduct of a public figure in street language’. However, he was detained the next day under the orders of District Magistrate, Imphal West, N Praveen Singh, for preventing him from resuming his prejudicial activities against the security of the state and to the maintenance of law and order as he was a habitual offender.

Brozendro Ningomba, president of All Manipur Journalists Working Union (AMJWU), who in a statement earlier this month disclosed that the Union had adopted a resolution in August to refrain from intervening if any journalist working under the union faces any consequences for posting defamatory comments or videos not connected with the profession of journalism.

The statement also stressed  that Wangkhem’s detention under NSA after he was granted bail by the CJM, Imphal West, doesn’t in any manner change the Union’s stand.

Talking about the scribe, Brozendro says Wangkhem is an “ungrateful beast” who didn’t have the decency to say a simple “thank you” during the more than the two months he worked under him after securing his release in August.

Wangkhem was earlier arrested on August 9 after posting a picture of Laishram Radhakishore, a BJP legislator from Oinam assembly constituency, on Facebook implicating that the BJP organised a rally to sabotage the agitations of the students of Manipur University seeking the ouster of its controversial former Vice-Chancellor AP Pandey.  His caption read: “I am not organising but just observing: An MLA of Buddhu Joker Party.”

“How many times am I going to kneel before others to bail him out? I am willing to be sent to the gallows for securing his release earlier by violating certain legal procedures,” Ningomba stresses.

Defending his stand despite Indian Journalists Union’s support to the arrested scribe, Brozendro says most of the IJU members are communists hell-bent on toppling the BJP government who address one another as ‘comrades’.

Another Facebook post of Wangkhem from July 8 mentioned that he had spent a night in police lock-up a day prior after a scuffle with Laishram Radhakishore’s escorts who had dumped him at a police station after beating him up for overtaking the MLA’s convoy.

Wangkhem writes in that post: “I did not run over anyone nor collided with any vehicle. Then why did you beat me and put me in a lock-up? When they were drafting the undertaking for my release, they told me to sign agreeing to never report about the incident in the media nor make it public but I refused and told them that I would prefer to stay in a lock up instead of signing. So, I had to spend a night in the lock-up.”

His wife, Ranjita Elangbam, confirms the incident. So does Richard Ranjan, a desk editor at the Information and Service Television Network (ISTV), a colleague of the arrested scribe.

“The escorts of Oinam MLA Laishram Radhakishore kicked him in his gut and thrashed him for overtaking their convoy while he was returning home after hosting an event in Bishnupur district. After learning about his identity as a journalist, they took him to the nearby Nambol police station instructing the policemen there to suppress the issue at their own discretion,” Ranjita says. Besides working as a journalist, Wangkhem also dabbles in emceeing and teaches spoken English.

“We went to Nambol police station to secure his release sometime in July,” says Ranjan, referring to Wangkhem’s first run-in with the government. He adds that “KC is a thorough gentleman and professional” committed to his job, narrating incidents about Wangkhem’s punctuality and responsible attitude at work.

Ashish Hamom, one of his co-workers from Impact TV where Wangkhem worked before joining ISTV, says he can vouch for the fact that despite juggling various jobs, Wangkhem is quite punctual and efficient to the point that he felt being taken for granted and exploited, which eventually led to him quitting the news channel.

Pukhrambam Prufullo, president at the ISTV Network who is also Wangkhem’s last employer, says apart from his few misadventures with those in the government and acting against office rules by making things personal, he was performing “commendably”. However, Wangkhem’s colleagues from Impact TV say he never had such issues while working there.

Prem Aribam, chief of bureau of the news section at Impact TV, recalls Wangkhem was hired as a contractual anchor initially, but was soon promoted as a full time anchor, and then as a desk-editor.

“He was a chilled-out person who used to crack jokes and laugh along with his colleagues often,” says Aribam, reminiscing his time with Wangkhem while expressing dismay at the controversy surrounding his former colleague.

Talking about Wangkhem’s last days at Impact TV, channel editor Raj Nongthombam says he worked under stress as the editorial was understaffed, and it was difficult for Wangkhem to continue doing that for a long time.