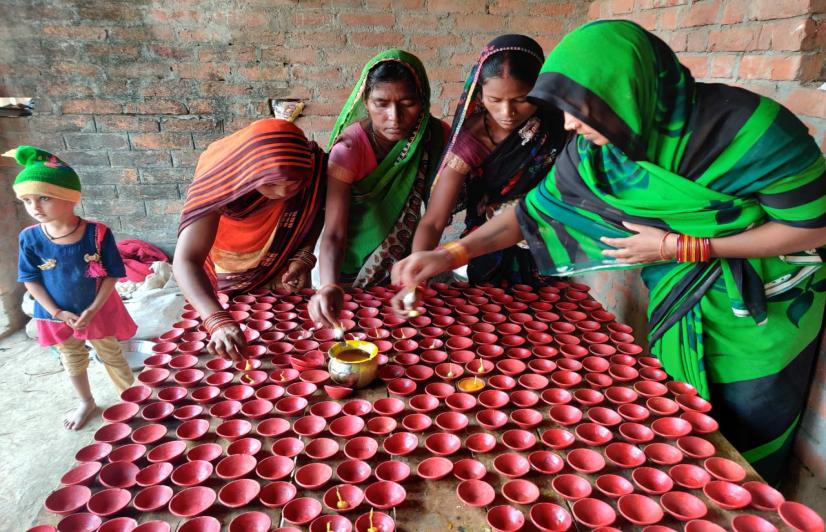 Barabanki: Chayanpurva village, situated about 60 kilometres from Barabanki district headquarters of Uttar Pradesh, is home to the Kevat community (SC), who have been associated with bootlegging. As most of the villagers and the community members indulge in the illegal trade, the district administration found a new way to bring the villagers out of this darkness.

The Barabanki district administration with the help of a non-profit organisation is trying to help the villagers earn a livelihood by making diyas (earthen lamps).

Over 12,000 people have been killed across India owing to illicit liquor in the last ten years, as per a news report. In May 2019, 15 people died from consuming spurious alcohol in Raniganj, a neighbouring village.

Arvind Chaturvedi, Superintendent of Police, Barabanki, told 101Reporters that Chayanpurva village was infamous for its hooch racket for the last two decades.

The brainchild behind this programme, Chaturvedi added that they held several rounds of discussion with the officers and came up with this. Several people from the village have lost their lives to hooch and many of them have become handicapped, so it was important to bring them into the mainstream and they are earning money and leading respectful lives presently, he said.

For Chayanpurva village resident Ramkali, who only goes by her first name, it’s the first time that she is engaged in a trade other than preparing hooch to earn money.

Ramkali, who is in her late 20s, is a mother of three. She stated that she started making diyas about a month ago and has been earning Rs 100 per day. She mentioned that her husband, who works as a daily wage labourer, had failed to find work since the COVID-19-induced lockdown was imposed.

“In the last Diwali, my husband was jailed for three days when he was caught by the police for selling liquor in a market nearby,” she added.

She explained that members of the community are neither educated nor skilled enough to take up other jobs. This made making and selling of hooch a lucrative job and that's why it ran across generations. However, Ramkali said that they always wanted to shift to another trade, because of the risks involved, but now finally it’s behind them and they can lead a happy and prosperous life.

Another resident Basanti, 29, who also goes by her first name, stated that she works with six other women in the village to make diyas. She narrated that she prepared hooch for three years after her marriage to sustain.

The work of diya making in the village is being supervised by non-profit Makkhiwala, which is providing wax and other raw material to these women and is responsible for its marketing.

Speaking to 101Reporters, Nimit Kumar Singh, director of Makkhiwala, stated that they wanted the locals to start beekeeping as it’s a profitable business and requires minimum effort at first. However, as Diwali was nearing and the women residents were in dire need of money, they decided to make diyas.

He explained that for the programme, they have hired one woman from each family in the village. Each woman from the 98 families in the village is paid Rs 1.50 for each diya and they have manufactured over 2.2 lakh diyas, he added.

He mentioned that they are not earning a huge profit as the production cost for one piece comes at around Rs 5, and they sell it for Rs 5.50 per piece. However, he clarified that making a profit was not their motive. He added that they have a target to sell 5 lakh diyas by Diwali.

The Uttar Pradesh administration is not leaving any stone unturned to make this Diwali environment-friendly. The Lucknow administration has begun selling cow-dung diyas through the ‘Lucknow One’ application, which is used to solve sanitation and water problems. Speaking to the media, Lucknow municipal commissioner Ajay Dwivedi stated that the step to make and sell cow-dung diyas is being taken to promote an eco-friendly festival and it would also bring in money.

Meanwhile, the Uttar Pradesh prison department is also getting cow-dung diyas manufactured by the prisoners in Mathura jail, according to the official sources.