Blackmailer and extortionist: The sordid side of being a stringer in India 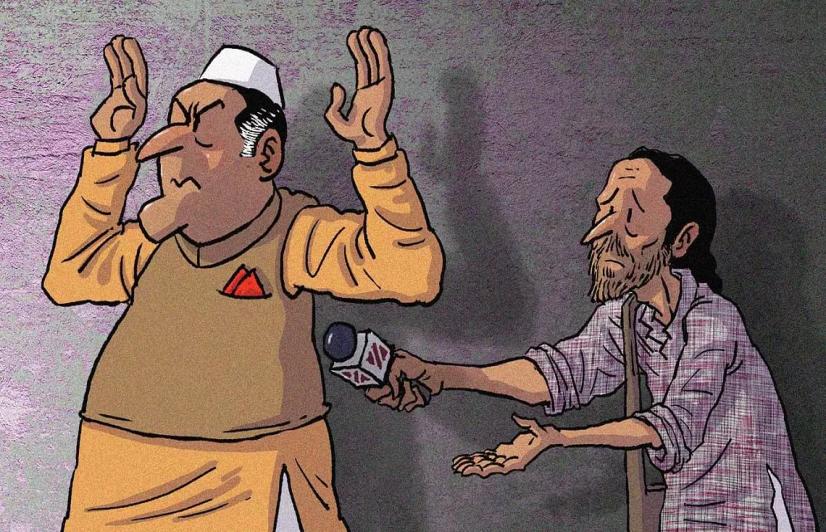 While the Indian television media, national and regional, keeps around hundreds of stringers on their payroll, only a select few offer proper remuneration. In the absence of adequate compensation and a regular means of livelihood, some stringers resort to illegal means which includes extortion, to earn money.

In December 2019, a stringer associated with a national news channel and two news dailies was arrested by the police in Faridkot, Punjab where the accused allegedly threatened a doctor and asked for Rs 1 crore to not circulate a video featuring him. In another incident from Punjab, the police arrested a stringer from Ghanauli village of Rupnagar district on the charges of blackmailing in November 2018. Last September, another blackmailing case from Haryana came to light where three journalists allegedly extorted Rs 14.50 lakh from an excise inspector.

In most cases, stringers are individuals from small towns, but the ones working for media houses get extremely low pay and in some cases, there is no financial remuneration.

Only a few media houses pay up to Rs 500 for a story to a stringer, but only after the channel runs the story on-air and it’s rare for a small-town stringer to get a slot in the news bulletin segment. Apart from the unsatisfactory pay, even the low rate of commissioning of stories makes it difficult for a stringer to sustain.

To get affiliated to a news channel, a small-town stringer has to obtain the mic ID of the concerned news channel. The price of a mic ID varies depending on the city and channel. A reputed channel can charge up to Rs 1 lakh in big cities, while it’s marginally less for smaller towns. A block-level stringer has to pay Rs 10,000 for a mic ID and it goes up to Rs 25,000 for the district level. While news channels mark the deposit as security money, it’s non-refundable. Only a handful of regional channels and a few national channels don’t charge for the mic ID from their stringers.

A stringer from Chhatarpur district of Madhya Pradesh, on condition of anonymity, told Newslaundry that while working for a regional news channel in Madhya Pradesh, he was asked to blackmail people.

He added that even the human resources department used to pressurise him into finding advertisement opportunities as there was no marketing team working in his district.

While stating that extortion is an open secret in the media industry, he has encountered many such instances and has been offered such deals. He mentioned that he was contacted by a college junior, who works for a YouTube channel and a local newspaper, for extorting money from top-level officials who were involved in faulty construction in a pipeline project. The junior asserted that he could get a good deal for not printing the story. After declining the offer, the stringer tried speaking to the officer to report the blackmailing issue but the officer refused to divulge further information.

He narrated that during his recent visit to Panna for a story on diamond mines, the local driver who was also a part-time journalist befriended him and began revealing information that he had collected by filing ‘Right To Information’ requests. He highlighted that the driver explained to him the corruption in the local administration. However, he asserted that the driver-journalist didn’t want him to publish the stories, but wanted him to call the officers and finalise a deal in exchange for not publishing the story.

Another stringer, Subhash Deshraj, from Balaghat district of Madhya Pradesh, mentioned that after completing his master's degree in 2015, he applied for a position at Sadhna News as there was no correspondent from his block. To receive the appointment letter, mic ID and identity card, he was asked to submit Rs 25,000 as the security deposit. While they had initially mentioned that the security deposit is refundable, when the management changed after three months, they discontinued his appointment and didn’t return the money.

Even after visiting the regional office at Bhopal multiple times, he didn’t receive the amount. He added that he had the receipts, mic ID and identity card of the organisation with him, and had paid Rs 3,000 per month for over six months to keep using the mic ID. He stated that when the management changed, they refused to pay back the dues owed to him and appointed another stringer from his area.

Deshraj is working with a local daily in Balaghat, and though he has kept working with numerous news channels and also deposited security money without any guarantee of return, he is reluctant to share how he manages to survive.

After satellite channels, the emergence of digital and YouTube channels have added more difficulties for the stringers. The Chhatarpur-based journalist stated that once he got a call from a YouTube channel who wanted him to suggest a Bihar-based stringer for them. However, like most of the YouTube news channels, they also didn’t have a revenue model and had asked him to find someone who will raise funds for the channel and his earnings would be based on the business he gets, he added.

A stringer from Jagdalpur in Chhattisgarh told Newslaundry that senior journalists of the area have a certain hold on the village administration, and in the cases of misuse of funds at the panchayat level, they approach the Sarpanch and officials with local administrations to strike a deal.

A symbiotic relationship exists between a stringer and a corrupt official, he commented.

He agrees that not every journalist indulges in such immoral activities, and mentioned that some stringer associated with prominent organisations get paid based on the number of stories. However, even such stringers have to struggle to sell advertisements, he added.

A veteran journalist Neeraj Soni, who worked in the Bundelkhand region and has recently started a YouTube channel, stated that even while working as a bureau chief with daily newspapers, he used to get pressure from the management to achieve editorial goals, which he asserted is not different from the marketing goals.

He mentioned that at the bureau level, there is enormous pressure from the management to sell advertisements at higher rates to meet the operating costs. If one fails to sell ads, that means he/she will not be working anymore for the organisation, he added. However, he also said that it is difficult for a journalist to raise money, and it becomes almost impossible for a journalist to survive in this environment.

He highlighted that this model of business allows for fake news to creep into the system. He mentioned that in a case from Chhatarpur district, a stringer mixed up the facts in a story to get air time and reported it, but ended up getting booked by the police.

"The newsroom wants a good story and the management wants big business from a stringer. In that case, the quality of the story is compromised and the reporter cooks up stories," Soni told Newslaundry.

Shivam Tiwari, a media graduate, has the same ordeal to share. Belonging from the Bundelkhand area, he wanted to pursue a job there, but owing to the lack of opportunities, he moved to Mumbai where he was offered a job.

While he still keeps trying to secure a job in his native state, regional channels ask him to pay Rs 50,000 a year for an appointment.

Earlier, Shivam had managed to get a job in the local edition of a national newspaper, but couldn't survive long owing to the pressure to sell advertisements.