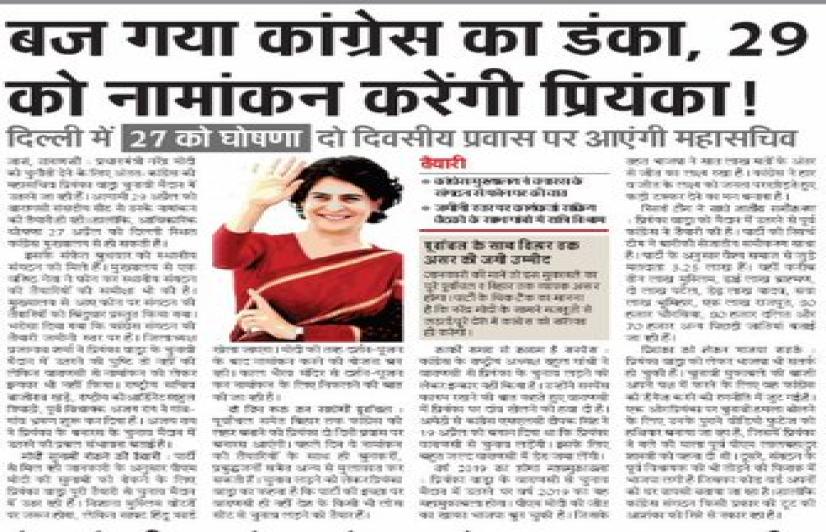 No Priyanka from Varanasi, Modi eyes easy win on day of Varanasi roadshow

Lucknow: The suspense around the Congress candidate from Varanasi ended in a lull with the party renominating Ajay Rai against Bharatiya Janata Party’s (BJP) superstar campaigner Narendra Modi, who had won the seat claiming 5,81,022 votes in 2014. Modi’s close rival back then was Aam Aadmi Party’s (AAP) Aravind Kejriwal who could muster 2,09,238 votes. Rai was a distant third with 75,614 votes.

Until the Congress announced its candidate for Varanasi, speculations were rife that the party may field its General Secretary for East Uttar Pradesh, Priyanka Gandhi, from the prestigious constituency.

With no strong opposition candidate in the constituency, Varanasi seems like a walkover for Modi, who had received a substantial fight from Kejriwal in 2014. That fight, and the Delhi CM’s aspirations for rapid progress at the national stage in 2014 have, however, limited his party’s part in these general elections.

Claiming that the party’s focus this election is on Delhi, Punjab and Haryana, AAP UP spokesperson Vaibhav Maheswari says, “We didn't get (an) appropriate candidate for Varanasi..We didn't want to just cut the anti-Modi vote and give him benefits.”

AAP has fielded candidates on six seats in UP.

The announcement of Rai’s candidature came from the Congress camp at a time when the PM was on a roadshow in Varanasi Thursday. He is to file his nomination in the constituency on Friday.

Rumours around Priyanka’s candidature from Varanasi, coupled with her response that the party’s word would be supreme in this regard, had turned the story plausible for many. Some local editions of newspapers went a step ahead to declare that ‘Priyanka is coming to Varanasi to give a tough fight to Modi’. (Newspaper clipping attached)

Rai, a senior Congressman from the Bhumihar community who has been a Member of the Legislative Assembly (MLA) five times, has a stronghold on the Brahmin and the Bhumihar communities. He was earlier a BJP MLA from Koalsala Assembly constituency between 1996 and 2007. Ahead of the 2009 Lok Sabha polls, Rai, when denied a ticket from Varanasi, moved to the SP in bargain. In a closely fought contest, Rai ended second runner-up, behind BSP candidate Mukhtar Ansari, who had allegedly ordered the killing of Rai’s elder brother, Awadhesh.

Political commentator Vinod Kapoor believes Priyanka Gandhi is “a trump card of the Congress”, which the party will not use this soon. “They have brought her into politics at a time when regional parties of Uttar Pradesh, like SP and the BSP were not giving importance to the Congress. By giving her the responsibility of UP East, a very crucial region, the Congress has definitely made its cadre active.”

Kapoor says that fielding Priyanka from Varanasi, a tough seat, would have been a wrong decision as the party would not wish to waste one of its promising candidates in a contest where chances of victory would be bleak.

R R Jha, a senior professor of Political Science at Banaras Hindu University (BHU), says the PM has an open field in Varanasi this time in the absence of any strong opponent. “It is being said that Ajay Rai has a strong hold among his caste, but the ground reality is that the Bhumihar vote is split between Modi and Rai. Watching the number of votes Rai got in 2014 elections, it seems that even Bhumihars do not vote for him.”

Jha offers little relevance to SP-BSP alliance’s Shalini in this contest, citing her unsuccessful contest in the 2017 mayoral polls. He says that the opposition parties this time do not seem interested in a direct contest with Modi in Varanasi.

Voting in Varanasi is scheduled on May 19 in the last phase of elections.

R P Dubey, a political commentator, opines that Rai’s Banarasi connection and local leadership may get him some votes, but the contest remains one-sided in favour of the Prime Minister.

In a similar fashion, both, the Congress and the SP-BSP alliance, have kept the contest in Lucknow low-key. Against Rajnath Singh of BJP, Acharya Pramod Krishnam will fight on a Congress ticket and Poonam Sinha, wife of Shatrughan Sinha, is to contest as a Gathbandhan candidate.