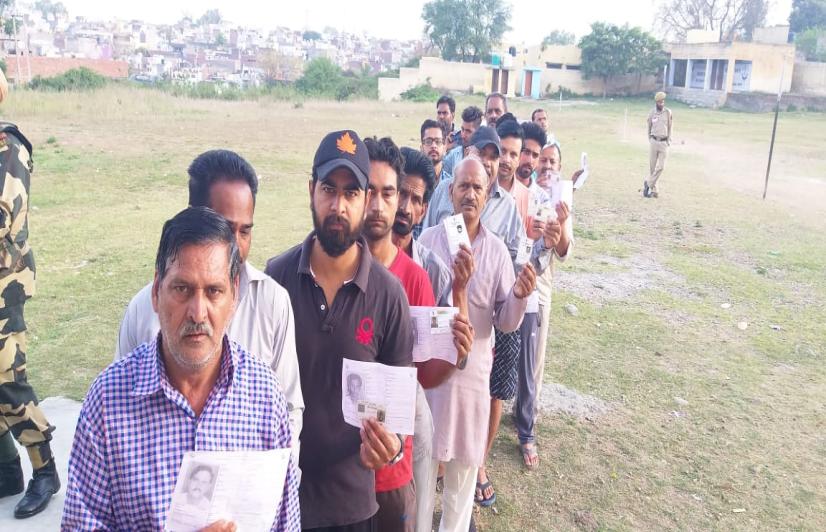 Jammu: If the turnout at the first phase of polls in Jammu and Kashmir is something to go by, the intrepid voters of the state have defied the boycott called by pro-Pakistan separatists and ultras by coming out to vote in impressive numbers, considering the climate of violence and uncertainty gripping the state. Of the six Lok Sabha constituencies in the state, Baramulla and Jammu went to polls Thursday, drawing out voters from some of the most terror-infested areas, amidst reports of malfunctioning EVMs in many parts of the state.

Baramulla’s Uri district witnessed a substantial 57 percent turnout, a categorical rejection of calls for election boycott. Uri is, of course, the site of the terror attack on an Army camp on September 2016 that had prompted the Indian army to launch surgical strikes against Pakistan.

Isolated incidents of unrest were reported in the state. A teenage boy died when a group of persons resorted to stone pelting on the security forces returning from Kupwara’s Langate area. Security forces fired on the unruly mob, killing the 13-year-old boy. Youngsters also came out in large numbers in Dangerpora of Bandipora, claiming that they were fed up of the Governor’s rule in J&K. Internet services were suspended in Baramulla where a woman in Pattan was injured when supporters of separatists pelted stones on voters for disobeying the call for poll boycott.

Bashir Ahmed, presiding officer of Shahpur, said, “Experts visited the polling station and rectified the fault. At the time the machine was issued to us, it was working perfectly”. He couldn’t confirm if it was indeed Congress button that was not working.

Raman Bhalla, Congress candidate from Jammu said that there was a large-scale malfunctioning of EVM machines in Rajouri and Poonch area where the core vote-bank of Congress was present. “People started protesting soon after polling started when they found that the Congress button on EVMs is not working at many places,” said Bhalla.

Reports of EVM malfunction were also received from Manjakot and Thanamandi areas of Rajouri district. Former minister and Congress MLA from Rajouri, Shabir Ahmed Khan alleged that the machines in Muslim dominated areas were deliberately made non-functional so that the “secular” forces could not vote against the BJP.

Reports of these EVM failures aside, the Election Commission was able to, for the first time, allow troops deployed in the remote and inhospitable terrains of state to download their ballot paper online, vote and forward the ballot to their respective electoral returning officers through post. The facility was provided at Siachen glacier and the LOC.

State president of BJP Ravinder Raina was issued a notice by the EC after he was filmed asking an elderly voter in Gandhi Nagar about her preference, in violation of EC rules.

Former Chief Minister and president of PDP Mehbooba Mufti on her Twitter alleged “a voter in Jammu was manhandled by BSF personnel because he refused to cast his vote for BJP”. However her claims rested on a video in which some people were seen protesting and raising slogans against the BJP, a former ally of PDP.

Major candidates in the fray in Jammu include Jugal Kishore of BJP, Raman Bhalla of Congress, Bhim Singh of National Panthers Party and Lal Singh of Dogra Swabhiman Sangathan. Jugal Kishore of BJP was the winner in 2014 and had bagged 6,19,995 votes against his rival Madan Lal Sharma of Congress who was able to get 3,62,715 votes. Lal Singh had won last assembly polls on BJP ticket but later turned rebel. He is now contesting from Jammu as well as Udhampur constituency that will go to the polls on April 18. Raman Bhalla is also a former MLA of Congress and a popular leader of Jammu. In Baramulla Parliamentary constituency, major candidates include Haji Farooq Ahamed Mir of Congress, Mohammad Maqbool War of BJP, Abdul Qayoom Wani of PDP, Mohammad Akbar Lone of NC, Raja Aijaz Ali of J&KPC. Engineer Rashid is one of the independents contesting the poll. While Lone is a former speaker of J&K legislative assembly, Engineer Rashid is a leader known for his secessionist stand.