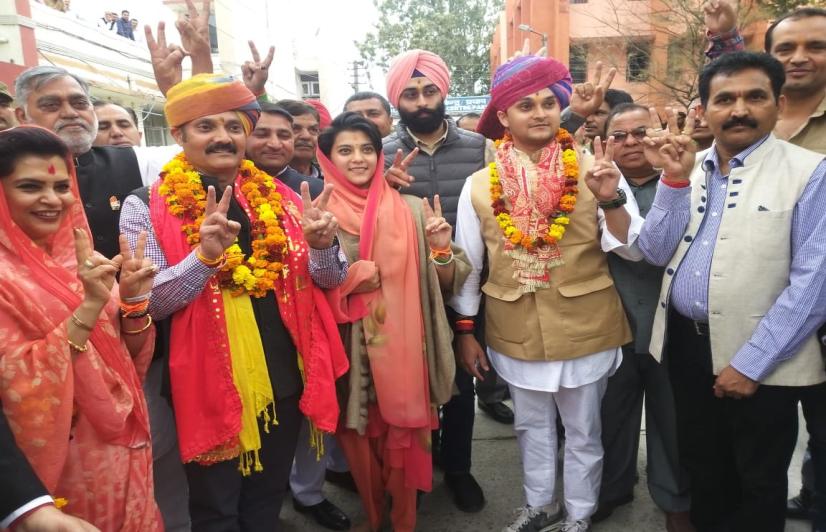 Jammu: Unlike in the 2014 Lok Sabha elections, the Rajputs of Jammu’s Udhampur constituency are confused as to which Rajput they should vote for. Not just the BJP and the Congress, but even the regional Jammu and Kashmir National Panthers Party have put up Rajput candidates in the constituency having a significant Rajput population.

While the BJP is once again relying on sitting MP and Union minister Jitendra Singh, the Congress has decided not to repeat its 2014 mistake when it was left red-faced as party’s stalwart and senior leader Ghulam Nabi Azad lost to Singh, a first-timer, by nearly 60,000 votes.

It is due to this factor that the party has now decided to field Vikramaditya Singh, a Rajput and the grandson of the last Maharaja of Jammu and Kashmir Hari Singh, from the Udhampur seat.

The Jammu and Kashmir National Panthers Party has fielded another Rajput ­­­­­­–– Harshdev Singh.

Also in the fray is Lal Singh, another Rajput and a controversial leader and former Congress MP who left the party to join BJP in August 2014 but changed his political affiliation again by launching his own Dogra Swabhiman Sangathan in February this year.

While the Jammu region has two of the total six Lok Sabha seats in Jammu and Kashmir, the competition in Udhampur is particularly interesting as it has become a matter of pride for high-profile candidates fighting from the constituency.

The BJP is also facing a tough time in the wake of “failed promises” of removing Article 35A and 370 made before the 2014 elections. The party was also not been able to end the perceived Kashmir hegemony over Jammu region and create employment in Jammu that has also infuriated people in the region.

A unique brotherly fight is also amusing voters during the campaigning. Devender Singh Rana, provincial president of the National Conference, is the brother of BJP’s Dr Jitendra Singh. On the other hand, senior BJP leader and Member of Legislative Council (MLC) Ajatshatru Singh is the brother of Congress candidate Vikramaditya Singh. Both Rana and Ajatshatru are taking part in the political campaign against their siblings.

Udhampur Lok Sabha constituency comprises 17 assembly segments in Jammu region that have a considerable Muslim population. Despite being a popular leader and union health minister in the Congress government, Ghulam Nabi Azad had to face defeat from Jitendra Singh in 2014 due to the Modi wave. The state was witnessing immense polarization at that time.

Political commentator and historian Prof. Hari Om says that Jammu and Ladakh region are once again witnessing similar polarization over discrimination being faced by these regions due to the hegemony of Kashmir. “The elections will again face a contest between BJP and Congress in both Jammu and Ladakh where people will vote on religious lines. Ghulam Nabi Azad did not contest the polls this time apparently because he was aware that it could be a repeat of the 2014 poll,” observes the expert.

Despite the considerable Muslim population in the constituency, the BJP had wrested power in 1996 under the leadership of Chaman Lal Gupta. It was in 2004 and 2009 when Lal Singh won twice on a Congress ticket. The constituency has remained a Congress bastion traditionally.

Capt (Retd) Anil Gour, a member of J&K Panthers Party who is also a strategic and political commentator, believes that the Rajput votes will get split in the constituency. “Being in significant numbers, the role of Rajputs in deciding the candidate cannot be ignored. However, since this time almost all the candidates are from the Rajput community, the voters may get confused,” he points out.

Will the blue blood sway voters?

To support Vikramaditya Singh, the royal family is also expected to campaign for him in the coming days. Singh’s daughter is married to the grandson of Punjab chief minister Captain Amarinder Singh, while his brother-in-law is Congress leader and Gwalior’s royal dynast -- Jyotiraditya Scindia. Both Jyotiraditya and Captain Amarinder Singh will take part in Vikramaditya’s political campaign, according to reports.

To target the Congress, the BJP is not sparing even former Prime Minister Jawahar Lal Nehru with whom Vikramaditya’s grandfather Maharaja Hari Singh had signed the instrument of accession. “Maharaja Hari Singh wanted to join dominion of India much earlier than October 1947, but Nehru did not allow that to happen due to a personal animosity with him. Nehru was dithering till Vallabhbhai Patel firmly asked him to accept the instrument of accession. However, Vikramaditya hides these historical facts as it does not suit him politically,” claims BJP  spokesperson Brig (Retd) Anil Gupta.

Vikramaditya had started his political career with the PDP and was even nominated as party MLC in 2015. In October 2017, he left the PDP claiming that his voice in favour of Jammu was being scuttled in the party.

Besides the clout of Vikramaditya and Jitendra Singh, Lal Singh is also another popular leader who cannot be ignored. He came to limelight for taking part in a rally that demanded CBI inquiry into the rape and murder case of a minor girl in Kathua and rejected police investigation that had indicted a group of locals in the crime. Later in April 2018, he resigned from the BJP and gained support among the Hindu population in the region.

Sant Kumar Sharma, a senior Jammu-based journalist, says it is not very clear as of now how effective Lal Singh will prove. “The elections are again shaping up as a vote for Modi or against Modi in the Lok Sabha. In that scenario, not many may vote for him. The votes he (Lal Singh) get may prove decisive for the victory of some other candidate.

“The Congress had got more votes from Doda, Kishtwar and Banihal when Ghulam Nabi Azad was the candidate. Apparently, he was favoured by Muslim voters. With Vikramaditya, not as strong a candidate as Azad was, the Congress score may go down further,” remarks Sharma.

Pic caption: Vikramaditya Singh with his family after filing nomination for Udhampur constituency.