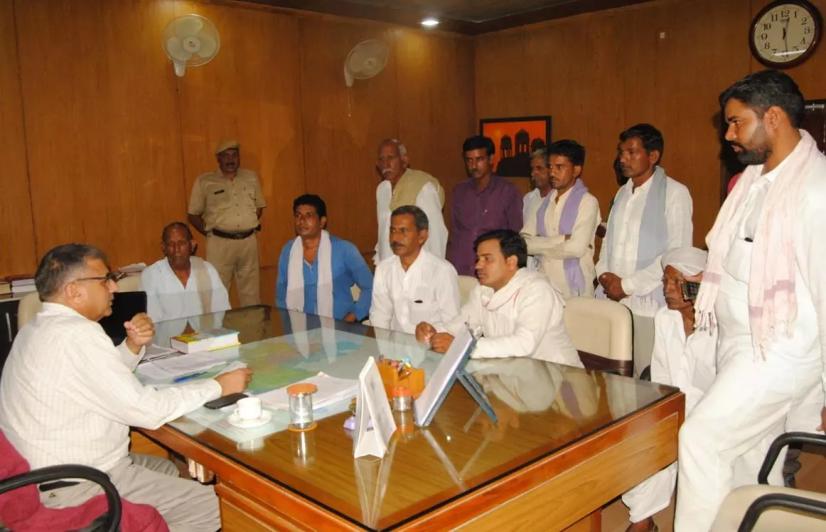 Jaipur: Hundreds of residents in five villages in Rajasthan find themselves in an unenviable situation after a government land acquisition project proposed in 1993 is yet to take off. While all developmental work had come to a standstill in the five villages in Hanumangarh district soon after the project was announced, the land for it is yet to be acquired, leaving the residents in the lurch.

In the three decades that have passed, not a single new developmental project has been announced in the village. Most of the roads that lead to these villages have seen better days. Pipelines that supply drinking water are in need of repair. Residents allege that the district administration has given up on the maintenance of basic amenities with electricity supply also being irregular and no new school opening up to cater to the burgeoning population in these villages.

The life of the villagers turned upside down in 1993 when the government proposed acquisition of over 47,000 bigha of land for a proposed station of the Air Force. Land for the air-to-ground armoured range was to be acquired from five villages - Moter, Dhandhusur, Banasar, Bangasar and Dheerdesar, all near the international border in Rajasthan. While in Bangasar and Dheerdesar, agricultural land was to be acquired, in Moter, Dhandhusur and Banasar villages residential land was also to be acquired by the Air Force.

The acquisition process, however, is yet to start.

Rajesh Sharma, sarpanch of Moter village, captures the plight of hundreds of families when he says, “For decades we have lived in confusion. We have not received any compensation but are living in fear of losing the roof over our heads any time. We can neither renovate our houses nor use our land for any purpose. Nobody knows when we will be handed an eviction notice.”

Several times the acquisition process was initiated only to be abandoned. On May 24, 1997 the Department of Home affairs in Rajasthan issued a notice under the section 4 of the Central Land Acquisition Act, 1894, followed by an invitation to raise objections over the land acquisition under Section 6 on May 22, 1998.

The Hanumangarh district administration then prepared an estimate of Rs 1,59,00,16,925 as compensation for 44,228 bigha of land and forwarded it to the state government. The government approved the award on May 20, 2000, and the matter was forwarded to the Central Government. The compensation amount was never paid and therefore the acquisition of land did not start.

The district administration claims that it has written to the Department of Home Affairs several times for release of the compensation amount but the complain has fallen on deaf ears.

But the once-pressing matter has now faded into oblivion for these politicians.

The present MP and former Minister of State for the Ministry of Chemical and Fertilizers, Nihalchand, says, “The area is no more a part of my constituency of Sri Ganganagar. It is now a part of Churu parliamentary constituency. Therefore, I’ve no idea of the latest developments.” A few years ago, after delimitation, the five villages were removed from Sri Ganganagar constituency and added to Churu constituency.

According to Churu MP Rahul Kaswan, “The matter of land acquisition is still pending. About two years ago, I met the then Minister of Defence, Manohar Parrikar, with a delegation of villagers to get the matter resolved. Parrikar assured us of an early solution. I’ve also raised the matter in the Parliament, but the uncertainty still prevails.”

Kaswan says that “red-tapism” in the government departments is to be blamed for the delay.

But his words offer little consolation to hundreds of families in these villages whose lives have been put in abeyance due to the project.

As authorities pass the buck, villagers suffer. “Nobody wants to get their daughters married to boys in our villages because of the uncertainty. We have houses and land but we can’t do anything there because they might be taken away from us,” said the sarpanch of Moter.

Their troubles are unlikely to end any time soon. Tehsildar of the region, Kasturi Lal, says, “We have no idea if the Air Force even wants our land or not. There has been no recent correspondence with them.”

The Army also declined to comment on the issue. Col Sambit Ghosh, the Army spokesman at Jodhpur, said that he has no information on the matter.