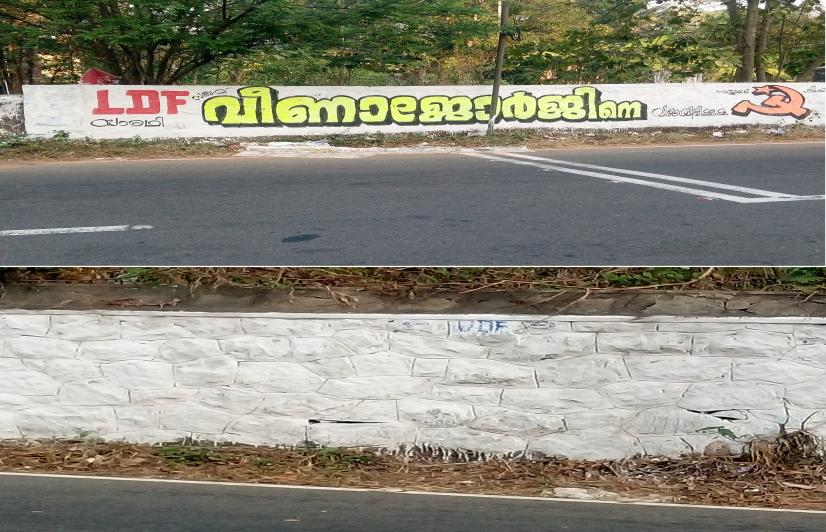 Kochi (Kerala): A sheer coincidence ahead of Lok Sabha polls is playing out to be in favour of the Left Democratic Front (LDF), a coalition of Left-wing political parties in Kerala, which has a dedicated pool of graffiti writers.

An order by the Kerala High Court asking political parties to follow ‘Green protocol’ and its strict enforcement by the Election Commission has left the political parties, except LDF, grappling with outdoor publicity issues.

Just before the Parliament elections were announced, the Kerala High Court on March 11 this year reminded political parties about the “Green protocol’ and prohibited the use of flex and other non-biodegradable materials for poll campaigning. The High Court ordered if any party or the candidate violates the directions criminal proceedings would be initiated against him.

Kerala Chief Electoral Officer Teeka Ram Meena followed up the stricture, declaring that the Election Commission would strictly not allow any campaign material that would pollute the environment.

‘Green protocol’ is a set of guidelines that seek to reduce the generation of waste and restrict the usage of non-biodegradable material. It was first implemented, and successfully too, during the “National Games” held in Kerala in 2015. The protocol since then has become a standard practice in all social and religious festivals in Kerala.

LDF has no problems

The High Court direction and Election Commission acting tough have forced the political parties to return to the ‘old-school’ methods of outdoor publicity, such as painting the walls with party slogans and candidate appeals. But over-dependence on flex boards and the “offending” PVC materials in recent years have created disconnect with the old system. Most parties have been caught unprepared to meet the challenge to provide outdoor publicity for their candidates.
Graffiti demands special skill and there is a serious shortage of the graffiti writers, putting the parties in a bind.

Graffiti has all along been a powerful medium for the communists. So, they have a dedicated pool of artists who are busy round the year, creating graffiti for the party events that keep happening. Also, since most of the artists come from humble backgrounds, they are more likely to be supporters of the Left parties, as such these parties are able to draw upon a resource that is almost captive.

LDF election committee chief at Pathanamthitta, Ananthagopan, said, “Our walls are entirely painted by party volunteers and we don’t face any problem. We have about 300 walls in each of the seven assembly segments of the constituency and almost all the walls are already done.”

It is no wonder, therefore, that the LDF walls have been populated with campaign messages and election symbols much ahead of other parties, which are still in the process of tying up the resources.

The LDF’s cause was further helped by the early finalisation of candidates, unlike the United Democratic Front (UDF---an alliance of Congress led political parties in Kerala) and Bharatiya Janata Party as both the parties kept on wrangling for seats till the last moment.

More demand, less supply
Varghese Thomas owner of Century Communications, a leading outdoor advertising agency said: “The wall painters were mostly absorbed in roles associated with flex boards and hoardings so that their jobs were protected. But this prevented new talent from coming into the traditional work of wall graffiti and calligraphy. Wall painting was no longer used for premium products and was limited to items of common use such as building materials and steel bars as well as promotion of local shops.”
“There is a sudden surge in demand, but supply remains limited,” Thomas added.

Political parties have been struggling to find enough skill to fill their walls. And those who are available demand a heavy price.
UDF and BJP candidates are facing a tough challenge to organise the required skill at such a short notice and for a limited period only.
Pathanamthitta, BJP district chief, Ashokan Kulanada, admitted that the delay in finalisation of names of candidates affected the progress of work.
Pathanamthitta, is one of the seats, where BJP hopes to win as the party candidate K Surendran was a key figure in the agitation against the entry of women into the Sabarimala temple.
The operation has been further constrained by the lack of vantage walls, particularly in urban areas, where property owners are reluctant to permit the use of their walls for election campaign. Strict monitoring of the activity by the authorities, including the monitoring cell of the Election Commission, ensures that parties do not get away lightly for violations.

The election bonanza in a way is helping democracy flourish in the outdoor publicity work, which had remained the exclusive domain of contractors, who had built up the flex business to sophisticated levels, backed up by a powerful network of printing units, material suppliers and designers.
With the focus shifting back to the humble artists, some of the more enterprising among them have themselves become contractors, building small teams of co-workers and taking up work directly from the parties. Each team has one or more calligraphers, with the rest of them responsible for painting the walls and organising other things.
The decentralisation has worked in favour of the workers as the flex contractors, as middlemen, used to pocket much of the profits in the earlier system.

Workers elated
Workers painting a wall for UDF at Pathanamthitta said that they were paid Rs 600-700 per day when they used to work for the flex contractors, but now they are earning double that money. Now they get paid for the skill that they possess, they added.
The workers said they were happy to be in demand once again, but they were not sure of how long this could last. Once the elections are over, they probably would have to go back to their re-aligned roles under the erstwhile flex contractors. Maybe, a limited number would graduate into contractors themselves.

An alternative non-polluting medium has been developed in place of the offensive flex and PVC material so that the activity can continue without inviting penalty.

Madhavan said that reputed fabric manufacturers such as Arvind Mills have stepped in to fill the void, making new cloth material available at reasonable rates.

Ambiguous government policies
Rajesh Madhavan complained that there are ambiguities in the policy relating to outdoor advertising, which, according to him, have been marked by ad hoc approaches in the past four to five years.

He said that the nodal authority to implement the “Green protocol" is the local self government department, which is supposed to issue permission for outdoor publicity activities in any particular area.

“With the introduction of GST, the process has become further complicated. Earlier, the fee for granting permission was collected by the department, but under the GST regime, the money goes into the state and central pool and the department has stopped adopting a proactive approach as it has no stake in the collection. This leads to delay in permissions issued by the department,” he said.

As per the existing arrangement, the outdoor advertising industry is charged tax at 18 percent, which has apparently increased the cost for the industry.

Madhavan has been leading a campaign on behalf of the committee that he heads for more sympathetic consideration for the industry from the authorities commensurate with the additional burden imposed on it.

But nobody is in doubt that the “Green protocol” has become a “golden rule”  and there is no going back on it. Stakeholders, including the industry and the workers engaged in it, have no option but to fall in line.

Tell-tale signs: Two walls within 400 metres of each other. The LDF wall complete with the graffiti (top) and the UDF wall with no message.