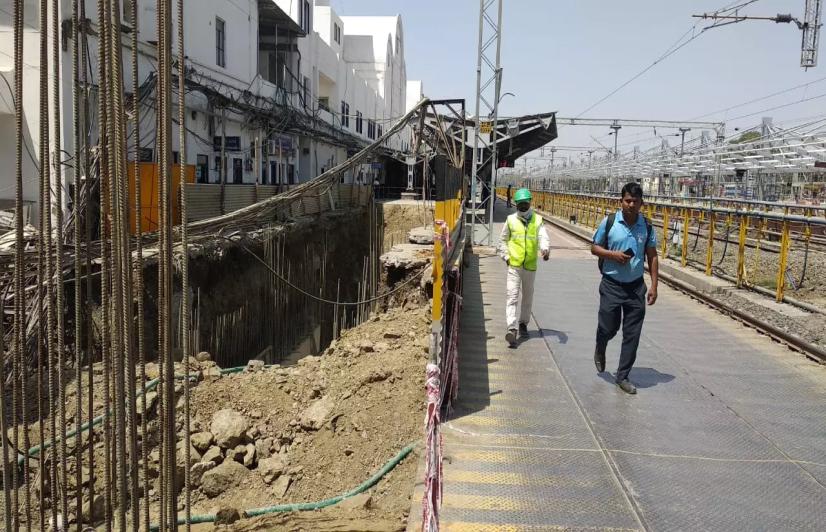 If you want to see how to destroy a well-functioning thing, instead of improving it, head to Bhopal’s Habibganj railway station, which is India’s first ‘private railway station’. It is true that degradation is usually associated with government facilities in India. Habibganj station’s case, however, is the opposite.

In 2008, the 40-year-old station became the first ISO-certified railway station. According to the railway website, it even had free Wi-Fi and was awarded the Best Tourist Friendly Station trophy by the Indian Railways in 2015.

Until a few years ago, it was one of the best examples of good design and aesthetics, passenger amenities, and cleanliness. Then, it derailed, and how!

Reason: the NDA government’s seeming obsession with privatisation, but more on that in a bit. What will be interesting to see is how this plays out in a few days once the 2019 Lok Sabha elections get underway.

Madhya Pradesh, currently governed by Congress's Kamal Nath who ended BJP leader Shivraj Singh Chouhan's 13-year-long rule in November 2018's legislative assembly elections, will see polling in four stages — on April 29, May 6, May 12, and May 19. Bhopal's citizens will cast their vote on May 12, and Habibganj station's state of affairs and the collateral damage from its redevelopment work are top on their minds.

Perils of privatisation (under the NDA)

In March 2017, the Indian Railway Stations Development Corporation Limited handed the station over to Bhopal-based Bansal Pathways Habibganj Private Limited to redevelop it as a world-class railway station and maintain and operate it for eight years, besides a 45-year lease on the station land.

Since then, all that has happened is that the once-efficient and spick-and-span station is now a jumbled, dug-up place, inside out. Today, passengers have to struggle even for basic amenities, like seating, coach positioning guides, escalators for the differently abled, and even drinking water.

Over the last five years, there have been several such privatisations by the Narendra Modi-led government. According to data released as on March 28, 2019, by the Department of Investment and Public Assets, the government has sold off over Rs 2 lakh crore worth PSU assets, a staggering 58% of all disinvestment since 1991, to dress its books.

The data reveals, “The Narendra Modi government has sold off Rs 83,523.14 crore worth of such shares in the 2018-19 fiscal, bringing the total public sector divestment proceeds in its five-year term to a whopping Rs 2,02,778.69 crore.”

And Habibganj, from winning awards to becoming an unrecognisable version of itself, is the perfect poster child of privatisation gone kaput.

The Habibganj redevelopment project was divided into two parts — Rs 100 crore for giving the station a facelift and improving passenger amenities, and Rs 350 crore for creating new commercial opportunities.
The deadline for the first part is July 2019, though the original contract had kept it as December 31, 2018, while the deadline for construction of commercial facilities is 2022.
However, two months after the handover, the station slipped in cleanliness ranking, from 16 to 51, as per the report released by then railway minister Suresh Prabhu in May 2017.
With a daily traffic of 48 trains, the station sees a daily footfall of 25,000, according to media reports. During the summer vacation and peak tourist season, the daily footfall rises to 35,000, which, given the station’s present degraded condition, is a recipe for chaos.


From utopia to dystopia

It’s a sweltering afternoon when I arrive at the station. Passengers are waiting for the Kushinagar Express on platform 4. With no overhead covering, they jostle under whatever little shade a partially constructed foot overbridge offers. Others squat on the overbridge staircase, making it difficult for those wanting to get onto the platform.

Ayush Sharma, a final year CA student, has been commuting from Vidisha to Habibganj for the last three years. “It breaks my heart to see this once-beautiful station in this state now. I don’t know what it will look like after the private company finishes with it, but for the last two years, it’s been a nightmare, especially for daily commuters like me. Platform 4 doesn’t have a single bench to sit on, so we wait on platform 1 till the train arrives.”

Recalling the good old days, Ayush rattles off all the amenities the station had — escalators, lifts, drinking water, shade, and seats among other things on all platforms. “The company should have at least preserved the basic amenities during redevelopment.”

Santosh Rao, another passenger waiting for the Kushinagar Express, wonders what the need for privatisation was when the station was already doing so well. “Every day, when a train arrives at a platform, it is complete chaos. A big accident is just waiting to happen,” he warns.

After passengers held protests, in which the local Congress and NSUI members joined, the company reduced the cost to rs 995 for two wheelers and rs 5,990 per month for four wheelers. The rates were reduced after railway board intervene in the matter. It is, however, still way higher than the earlier one.  NSUI spokesperson Suhrid Tiwari alleged the private company was “looting passengers in the name of parking fees”.

Tiwari says exorbitant parking fees, however, seem small compared to the environmental damage the redevelopment work has caused. “The private company has dug 60 feet underneath, because of which the groundwater source near the station has dried up. This has become a big election issue for Bhopal.”

Satish Nayak, a local activist with an organisation’s consumer and human rights protection committee, claims that due to the construction work, more than 200 bore wells near the station have dried up. The private company has allegedly set up a dozen pumps to remove groundwater during digging work, and these pumps have been running 24x7 for a year. Nayak adds he plans to move the high court and NGT over this.

Is the private firm already throwing its weight around?

Meanwhile, the company says the work is on schedule. “We have almost finished work on two subways,” claims Abu Asif, project incharge of Bansal Pathways. “The Itarsi-end subway is 98% complete, while the Bhopal-end one is 80% done. About 65% work on the east building and 80% on the new west building, too, has been completed, as has 40% of air concourse and platform resurfacing work.”

Bhopal MP Alok Sanjar backs these claims. “I have visited the station several times, and construction work is going on smoothly. The divisional railway manager and company officials have assured me that they will complete the work before the deadline,” he says.

Sanjar adds that the pace of the construction had got affected after a tea stall vendor had gone to court over a dispute with the company. “However, I was informed that the matter is now resolved.”

Tea stall vendor Seema Agarwal had alleged that the construction company asked her to pay 300% more fees than what she was paying to the railways. When she refused, her application for licence renewal was rejected, on June 18, 2018, and she was asked to vacate the stall in a week. Agarwal had further alleged that the company started construction near her stall, and it was about to be demolished. Hence, she had moved court, which, while directing the railways to reconsider her application, asked her to move a fresh one for licence renewal.

“Railways is monitoring the construction,” says Shobhan Chaudhuri, divisional railway manager. “I know many amenities are lacking, but I’m assuring passengers that they won’t suffer for much longer. This is a transition phase. In one or two months, we will provide all basic facilities. We will also penalise the company if it doesn’t complete the work in time.”

However, it’s not just the passengers who are unhappy with all these developments. Staff at Habibganj station, too, has been miserable since the construction began.

A government railway police personnel says the police station at the railway station doesn’t have a toilet. “In the absence of a proper facility on the premises, we have no option but to defecate in the open.”

Privatisation of different sections of railways has irked its employees’ union as well. President of All India Railwaymen’s Federation Rakhal Das Gupta says, “Privatisation isn’t beneficial for public or railway staff in the least. We have been opposing government’s every attempt of privatisation, which will ultimately lead to exploitation of railway staff and passengers.”