“I Am A Friend Of Coronavirus”: UP Police Names & Shames Again 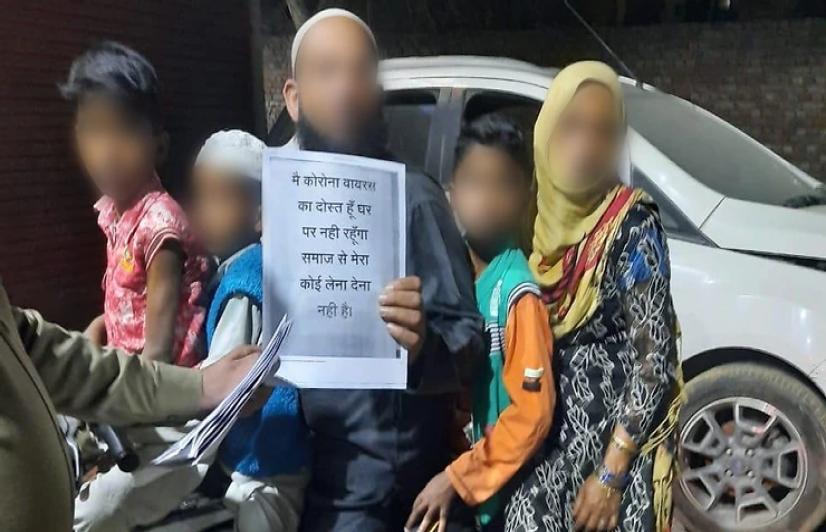 State of UP: ‘Shame hoardings’ still seen in Lucknow despite two top courts order their removal

Lucknow: Sipping on a cup of tea with his wife Veena Rana, Deepak Kabeer receives a call and the person on the other end requests him to remove his picture from Facebook as it may land him in trouble.
Deepak, a cultural activist who was jailed for anti-CAA protest in Lucknow which went violent on December 19th last has been receiving many such requests ever since his photo along with 56 others appeared on several hoardings in the state capital of Lucknow.
The Lucknow police and administration have got multiple hoardings clamped across the city with pictures, name and even address of the alleged rioters who took part in the anti-CAA protests. The hoarding even asks these alleged rioters to pay the amount of compensation for allegedly damaging the public property during the protest.

No remedy from court orders as government behaves adamant

“In entirety, we are having no doubt that the action of the State which is subject matter of this public interest litigation is nothing but an unwarranted interference in privacy of people. The same hence, is in violation of Article 21 of the Constitution of India,” the Allahabad High Court ruled in a suo-moto case regarding the hoarding issue on March 9.

“Accordingly, the District Magistrate, Lucknow and the Commissioner of Police, Lucknow Commissionerate, Lucknow are directed to remove the banners from the road side forthwith. The State of Uttar Pradesh is directed not to place such banners on road side containing personal data of individuals without having authority of law. A report of satisfactory compliance is required to be submitted by the District Magistrate, Lucknow to the Registrar General of this Court on or before 16th March, 2020. On receiving such compliance report, the proceedings of this petition shall stand closed,” the court further ruled.

The court, while ordering the immediate removal of the hoardings and directing the state to submit a report by March 16, said, “We have examined the action of the State under consideration in the instant matter by the touch stones aforesaid. So far as legality part is concerned, suffice to state that no law is in existence permitting the State to place the banners with personal data of the accused from whom compensation is to be charged. The legitimate goal as held by the Supreme Court in the case of K.S. Puttaswamy (supra) the proposed action must be necessary for a democratic society for a legitimate aim. On scaling, the act of the State in the instant matter, we do not find any necessity for a democratic society for a legitimate aim to have publication of personal data and identity. The accused persons are the accused from whom some compensation is to be recovered and in no manner they are fugitive.”

The Uttar Pradesh government, however, was seen in no mood of removing the hoardings as it approached the Supreme Court challenging the Allahabad HC order. The apex court on March 12 refused to stay the HC order and said, "The wrong-doer must be brought to book. But can the state go beyond that?" Justice UU Lalit observed, asking if the state government has the power to put up such hoardings.

Highlighting the risk the hoardings have posed to people, Senior Advocate Dr A M Singhvi, appearing for former IPS officer S R Darapuri whose name was published in a banner, submitted that the action of government amounted to an "appeal for lynching". Singhvi submitted that even the names of child rapists and serious criminals were not published.

However, on March 12, the hoardings with all the names were seen after the HC and the Supreme Court judgements as they were on the first day.

When 101Reporters reached out to Mrityunjay Kumar, the chief advisor to Uttar Pradesh Chief Minister Yogi Adityanath, regarding the same, he refused to comment but said, “Our team of legal experts is looking into the matter.”

‘People are keeping a distance’
Commenting on how his life has changed after being booked by the police in connection with the violence during the protest, Deepak said that now people who were close to him are distancing themselves because of the fear.
“An atmosphere of fear has been created. People who had their pictures with me on social media accounts are deleting them and even not taking phone calls. I am not saying that they are doing anything wrong and in my opinion they are only saving themselves because everyone wants to be safe and secure. The family is also reeling through an unwanted fear due to all this. My teenage son in school is also being looked like if he has done something wrong,” Deepak told 101Reporters.com.
Narrating more about the consequences of being sent to jail by the police wrongly, the cultural activist said, “Not just financially, but emotionally also we have been facing a lot. I was in jail for a long time and due to that things at home went haywire. People who were earlier always up for the help have also started avoiding us and now our picture has come up on the hoardings which has made our information public.”
“Making our picture and information public is totally undemocratic and it was not at all required because the matter is still in the court and police failed in producing any evidence against us. This is nothing but creating an atmosphere of fear where our information is made public for mob which has been brainwashed with radical nationalism. We can be lynched our houses can be attacked and our lives have been put at risk by the government,” he said.

Mrityunjay Kumar, the chief advisor to Uttar Pradesh Chief Minister Yogi Adityanath said that the objective of putting these hoardings was to demoralize people from indulging in any activity where public property can be damaged.
When asked who has given the orders for this, the advisor said, “All the protocols were followed before the decision was taken and concerned officers decided to do it.” It may be pointed out that neither the district administration nor the Lucknow Police replied to the phone calls made to them. They even denied meeting the reporter in person regarding the queries.
Kumar, when asked who will be accountable if something happens to these people whose pictures have appeared on the hoardings, said, “In the land of Yogi Ji no one is allowed to take law and order in hand. It is not Delhi, it is Uttar Pradesh. Nothing will be done to anyone and the things happening in Delhi is a different model which cannot be stunted here.”
Kabeer said that he is contemplating taking legal action against the administration and police for making his information public.
Sadaf Jafar, the sole woman whose picture has appeared on the hoardings said, “This is an invitation to the mob given by the government to act against us. Now people know our address and know how we look. Is this not putting my life in danger, what if a mob attacks me anywhere.”
“I am a single mother. I have already been jailed for a peaceful protest and assaulted badly. I know how many difficulties I am going to face. I also know that I will not be getting job easily as now a criminal case has been lodged against me and people who earlier cared for us have now started avoiding me because no one wants to invite trouble and I don't find it wrong but still this has already made my life hard,” she said.
Expressing her fear, she said, "Who is going to look after my kids if something happens to me due to all this stuff. I am worried for my future. I am definitely going to take drag the responsible authorities in court and the consultation with the advocates is going on in this regard."

It is to be mentioned that the Allahabad High Court in February last stayed a recovery notice order against a Kanpur man saying the Supreme Court was looking at the similar notice order in a different case.
"The worst part is that the Constitution of India which I taught to my students is being used against us and this is really disheartening for me," she said.

No recovery notice, but photo is on display

At an interaction with the media, Shia leader Maulana Saif Abbas, a cleric whose picture also featured on the controversial hoarding, said that they were only present at the scene to help the tourists along with senior officials of the district administration.
He lamented the approach by the administration and asked them to show proof of his involvement in the stone-pelting incident.
“It is very sad to know that even when I am yet to receive any kind of notice, my pictures are there on hoardings all over the city,” he said.
He also alleged that the administration is under political pressure and reasserted their innocence while expressing an intention to fight it in the court of law.
“Not a single stone was pelted (thrown) in front of Bara Imambara where I was present, even the Superintendent of Police (City) and Additional District Magistrate were present on the spot. This is all done due to petty politics,” he said.
Similarly, Kalbe Sibtain Noori, another person featured on the hoardings, stated that they will take up the issue in the court.
He stated that he, along with several others, were termed as rioters by the government, whereas, they were there to help tourists and protest peacefully.
Noori, who is the son of Shia leader Kalbe Sadiq, also asserted that these tactics employed by the government won’t work, and stated they would approach the court, hoping for justice.

Advocate Ashma Izzat, who helped a lot of people getting bail after being jailed by the police post anti-CAA protest in Lucknow, said that she is going to file a writ petition in the vacation bench of the Lucknow bench of Allahabad High Court once it opens against putting the hoardings.

Speaking with 101reporters.com she said, “Putting up the hoardings is totally a violation of human and constitutional rights. The right to privacy has been violated here as all the information including the pictures have been made public which will also affect the image of these people. So, the administration and police also invite the defamation case against them. This step should have not been taken because the case of all these people is in the court and they are not absconding. It is the duty of the court to pronounce criminal and not the police. The police can only press charges and they should prove their charges in the court and should not put up hoardings like this.”
Robin Verma, a teacher at the Shia Post Graduate College in Lucknow whose picture is also on the hoarding said, “I was threatened by the police while they were beating me in police custody that they will destroy my family and ruin my life. Now that threat seems becoming a reality. My life and my family’s life is in danger after the hoarding issue.”
“I am yet to decide if I will take legal action against them but yes we are talking to our advocates for the legal remedies,” Robin said.