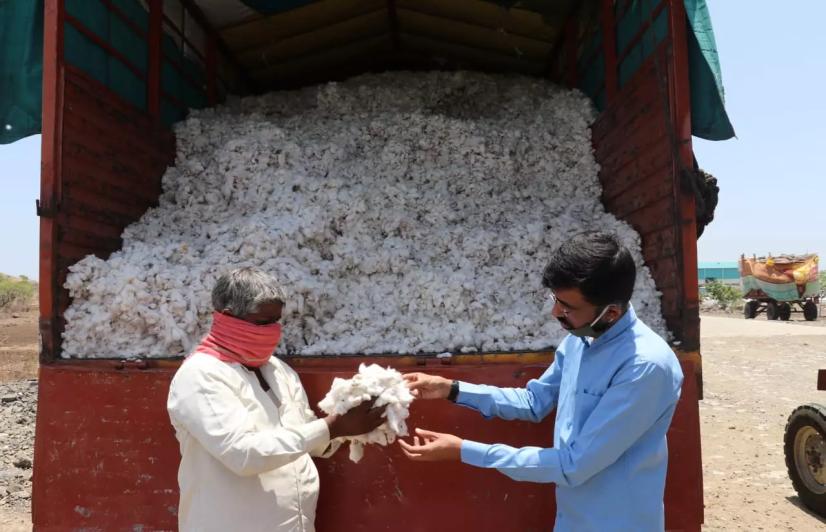 Beed, Maharashtra: For the past 20 days, Kuldeep Karpe, a farmer from Beed district in Maharashtra, has been waiting his turn at the ginning (the first mechanical process in cotton processing) mill but his cotton yield is yet to be sold. With the approaching monsoon, farmers from the cotton belt of Marathwada region of Maharashtra are struggling to sell their produce owing to the delay and confusion caused by Covid-19.

“I received a message on my mobile number informing about the token and asking me to bring the vehicle to sell my cotton to the ginning mill. It was 20 days ago and I am still stuck, waiting for my turn,” Karpe stated, adding that he is paying Rs 1,000 rent per day for the vehicle.

He added that he has about 45 quintals (1 quintal = 100 kg) of cotton, while there is allegedly a shortage of graders (person who determines the quality of the produce) and if the monsoon starts, he is set to suffer a loss of Rs2-2.5 lakh as no one would buy cotton soaked in rainwater, he said.

He said that even after selling his produce, he wouldn’t be able to earn a profit as he has to pay rents. He has decided to not sow cotton anymore and switch to growing baajra (pearl millet) or soybean.

The lack of communication, shortage of graders and fewer mills operating have affected the numerous cotton farmers.

In rural Marathwada, over 70% of the population depends on farming activities for its livelihood. The farmers usually sell their cotton yield in the first half of May. However, the lockdown to prevent the spread of Covid-19 affected the sale. Now, the farmers fear that monsoon will ruin their produce.

Ravi Deshmukh, 54, a farmer from Aher Chincholi, Beed district, mentioned that since sowing was delayed because of late rains, the harvest was delayed. However, the farmers thought that they would be able to sell the cotton at the expected rate of Rs 3,400 per quintal, but then the COVID-19 crisis put a stop on the cotton procurement process.

Deshmukh, who owns 20 acres of agricultural land to sustain a five-member family, had sown cotton in about five acres of the total land. He added that after the government announced that it will procure the cotton at Rs 5,400-5,700 (minimum support price - MSP), the struggle of selling the produce began as the transportation system is still not operating in full force.

He highlighted that the farmers are now forced to sell their produce to private businesses at Rs 2,200-2,700 per quintal, which is much lower than the expected price or MSP.

On June 2, hundreds of farmers resorted to Rasta Roko (road blockade) at the Mazalgaon Agricultural Produce Market Committee in Beed district. Prashant Pawar, state vice president of Maharashtra Pradesh Congress Committee, told 101Reporters that they have raised the issue of graders with the district collector.

In a written plea, Pawar underlined that though there are 125 ginning mills in the region, only 26 have been given the permission to operate, leading to long queues and shortage of graders.

While stating the district collector has assured action against the issue, he mentioned that the graders are only selecting the staple (top quality) of the produce, which is about 35% of the total produce.

Pankaja Munde, the Bharatiya Janata Party MLA from Beed, told 101Reporters that Chief Minister Uddhav Thackeray has already stated that the cotton yield would be purchased by the government by the end of September. However, when asked about monsoon damaging the cotton yield, a close aide of the MLA said there could be farmers suffering losses if the buying is delayed until late monsoon.

Admitting to the damage already caused, the district deputy registrar co-operative societies, Shivaji Bade, stated that about 3,000 quintals of cotton have been soaked in the rains, but the cotton would be dried, and processed before it is sold again. However, Bade said the number of graders has increased from eight to 28 in the last couple of days, reducing their long working hours.