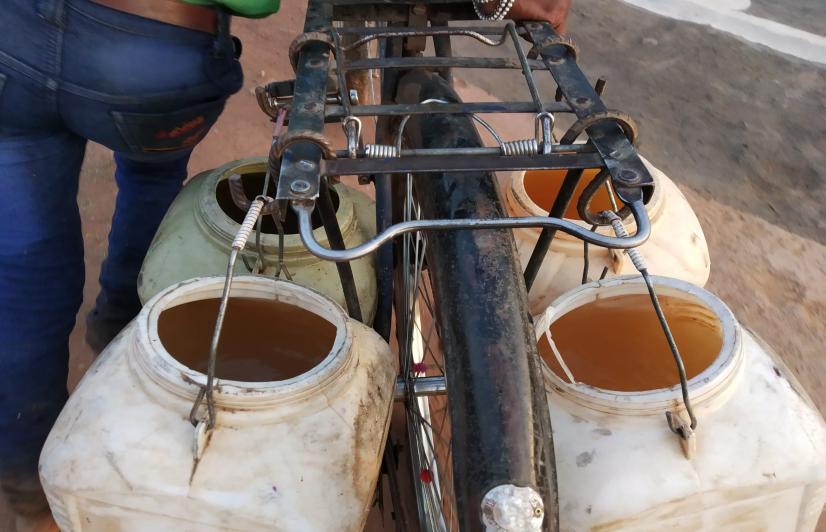 Panna: As the sun is setting in the horizon, children in the tribal village of Manas Sagar in Madhya Pradesh's Panna district, best known for diamond mines, can be seen carrying large water-drums on their bicycle.

"I fetch water from the well located in a graveyard two times a day. Sometimes, I reach school a little late due to this. In the evening I have to rush back from school to get water and there have been numerous times when I could not even change my uniform as it gets dark and visiting the graveyard is scary in the evening," says Kiran, a class VIII student.

The children residing in villages near Panna city have to bear the brunt of the water crisis plaguing the region. For about 200 people living in Manas Sagar, the major source of potable water is the Lokpal Sagar lake. But the village is deprived of it as the water from the lake is supplied to Panna which is situated three kilometres away. This lake is amongst the three lakes, the other two being Dharam Sagar and Nirpat Sagar, which is used to supply water for the residents of Panna.

Named after Maharaja Mahendra Lokpal Singh who ruled in the region from 1893 to 1898, the lake has a gross storage capacity of 6.37 million cubic metres. Baring the one well in the village graveyard, the residents of the village Manas Nagar have no water source other than Lokpal Sagar lake which is situated half a kilometre away from the village's boundary.

The water crisis in the village is multiplied by the administration’s apathy towards the plight of the villagers. Ram Kishan, a resident of the village, feels that even though nobody has prevented them from fetching water from the lake, it is unwise to use the water since the water is full of sludge and is harmful to one’s health. He adds by saying that while Panna Municipality has installed a pipeline to draw the water mechanically, the villagers don’t have access to water that is siphoned off by the pipeline.

"The solution is very simple, just provide us with the clean water drawn by the pipeline, but nobody cares about this small village," laments Kishan.

Summers are especially difficult for the people residing in the village as the water from the silt-laden Lokpal Sagar lake is unfit for consumption, the villagers resort to digging pits in their fields to procure water. Travelling two or three kilometres for water is the norm for residents in the village, as the water crisis is a perennial problem for the inhabitants of Manas Sagar. Some have resigned to their fates after bringing it up regularly with the district administration, Jitendra Ahirwar, a daily wage labourer, says, "We have tried everything from requesting our local leaders to the officials, but no one has any solution. We have accepted that this is our destiny and we have to face it every day."

“Manas Nagar is facing discrimination”, says Yousuf Beg, an activist from Panna. He says that while water is available in the village, the inhabitants are unable to use it. He proposes that the pipeline that draws water from Lokpal Sagar lake be connected to the village, which he says will require minimum efforts on the part of officials. “I have written to the district collector and other officials many times, but no one listens to the voice of the poor villagers," adds Yousuf.

Shortage of water is not the only issue that the dwellers of the village face. Contaminated water from the two water sources in the village aid to the health problems of the residents. Shiv Kumar lives with eight members of his family. He says that they use five to six containers of water which amounts to about 100 litres of water per day but require more than that. Talking about diseases his family suffers from, Shiv says that the kids of his family suffer from diarrhoea regularly while he has skin problems.

According to the Disaster Management Plan prepared by the Department of Management Studies, Indian Institute of Technology-Madras, Chennai, all tehsils in the Panna district are prone to diseases like malaria, typhoid and jaundice in the summer season, due to the scarcity of clean drinking water.

Former Member of Legislative Assembly of the area, Mukesh Nayak says that the issue of the water crisis is not the issue of governance as the water has to be available for distribution. He says that while he was serving as the MLA, he found that installing hand pumps are not the actual solution and insists that the administration works on a permanent solution.

The situation for the 59,091 inhabitants of Panna city is dire too. The city recorded a rainfall of 1176 mm last year, which was only 70 percent of the average rainfall. All the three lakes which supply water to the city are also suffering from the lack of water. BK Kori, an assistant engineer and in-charge of water supply in the city, spoke to 101Reporters, “If the summer continues like this we will not be able to maintain water supply like this.”

The district of Panna is one of the districts with the least Fully Covered (FC) habitations (public or private drinking water source that is without quality problems, has adequate supply and is accessible to all) as per the research of published in Journal of Rural Development for the Bundelkhand region.

District Collector of Panna, Manoj Khatri wasn’t ready to listen to the water crisis problem when this reporter tried to get his comments. The Chief Executive Officer (CEO) of the Zila Panchayat, Rajesh Ku. Ogrey and MLA Prahlad Lodhi were not available for comments on this issue.