Monks on a mission against depleting water sources in Ladakh 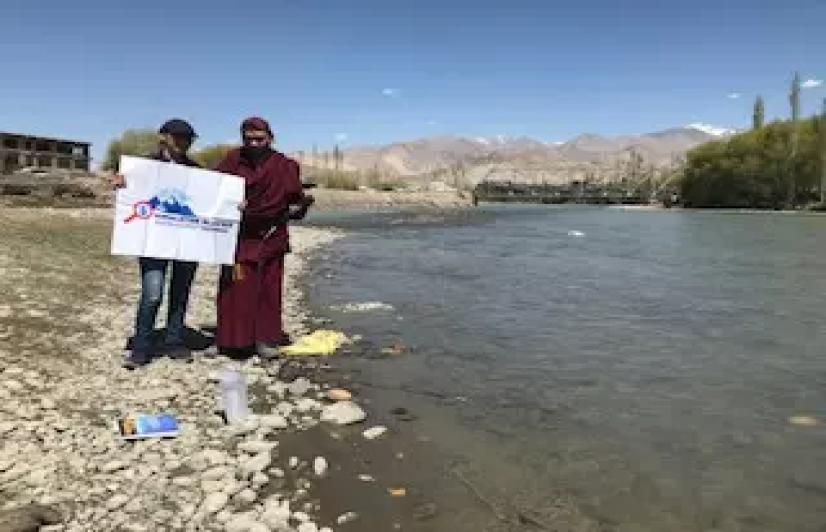 Ladakh: The role of monks is restricted to invoking spirituality, one would think, but the monks in Ladakh are going one step further by conserving the tributaries of Indus by keeping them clean. In line with the vision of an organisation called  Himalayan Glacier Waterkeeper, twenty monks, also known as affiliates, monitor as many as twenty villages, ensuring that the village water area remains clean at all times. A team head, who is in charge of the Leh region and also oversees the affiliates, works hand in hand with them to achieve this goal by spreading awareness and organising cleanliness drives that have been successful in leaving an indelible impact on the villagers and local communities. The monks have been a part of the visionary mission since 2016, when His Holiness Gyalwang Drukpa, the head of the Drukpa Kagyu Sect of Buddhism, birthed the impactful project. The monks who belonged to the same sect, decided to give wings to the mission by lending a helping hand. Ever since the inception of the project, the monks, with the unprecedented support of the Hill Council, Leh and the residents of Shey village Himalayan Glacier Waterkeeper, have been scripting success stories. Prominent among them is the victory that came in 2017, when an area near the River Indus near Sindhu Ghat was restored to glory after people were disallowed from contaminating the area by using it as a ghat to wash their carpets, blankets, clothes and cars. Team head Dechan Yangdol sheds light on how they accomplished the gargantuan task, “With the help of local villagers we (the monks and the team head) managed to get the government involved- raised fences along the Indus, put banners and boards along the road forbidding people from doing so and the villagers also took turns to stop people from using the area. After a few months, we were able to conquer this challenge and now, it is completely free of such activities. We still do random checks along the area and if we find vehicles they are warned of severe consequences.” The job of conserving the topko, however, is easier said than done. Dechan explains, “The water streams have to be looked after manually. That apart, arguments also take place at times with people who refuse to see reason. There are always some people washing in the stream behind everyone’s back.” Despite the challenges, Dechan is hopeful, “Being a religious society makes it easier- most villagers do understand the importance of keeping their water resource clean. Besides, Buddhism cares for all sentient beings- organisms in water being one of them. This philosophy of ‘karma’ is deep rooted in the society.”

She continues to stress upon the significance of the conservation of water bodies in Ladakh, “The water of the area is very precious as most of it is dependent on glacial melt. Due to rise in temperature throughout the Himalayas and global warming creating havoc to the environment, Ladakh has seen an immense dive in snowfall. Due to this, the underground water is being used up dangerously and carelessly to fulfil local and commercial needs. ( Ladakh sees an influx of approx. 1,60,000 tourists every year which is similar to its native population). The little water that comes via glacial melt is made dirty by contamination caused by animal waste, bathroom drainage, washing clothes/cars etc.

The organisation tries to make the locals understand the importance of keeping the water area clean as most people drink that water.” She adds, “The monks, being revered in the community, carry a stronger voice and their words are heeded by the people.” The organisation religiously collects water samples every month to gain an insight into its quality. Dechan says, “When people see us collecting data every month, they become more conscious about keeping the waterway clean.”

Gen. Rigzin, a monk whose village name is Sumda-Chun says, “His Holiness’s vision and thoughts have helped us see and do our bit towards the environment. We have an old Ladakhi saying- no water no village - this resonates with all the Ladakhis. Besides, the testing water at regular intervals helps us check for irregularities and we also know for sure that our animals are drinking healthy water.” Chuchot Affiliate Gen Jigmet sheds light on why the mission is so important to him, “I want to follow my Guru’s vision. He is doing all of this for Ladakh and wants to contribute towards making it a better place. Monks get posted to different villages after a two-year period and I hope to spread awareness wherever I go.”