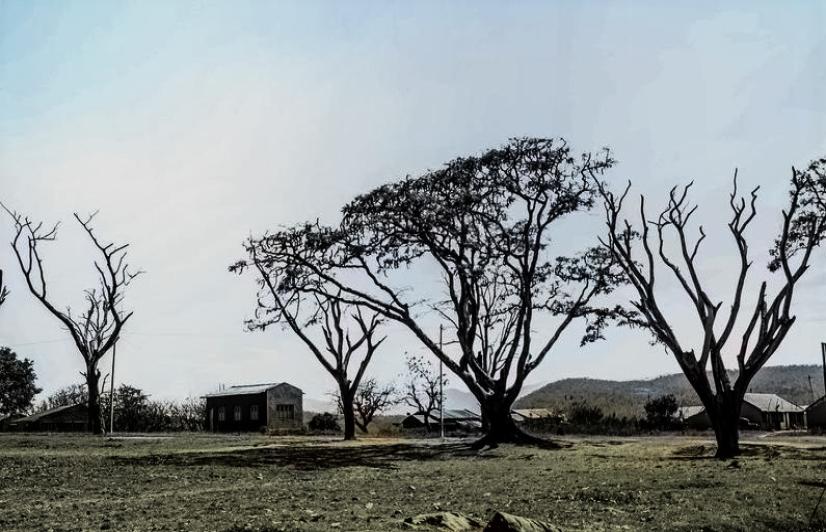 Changes in key climatic factors—especially rainfall—have been observed over Karnataka, according to a study by the Karnataka State Natural Disaster Monitoring Centre (KSNDMC). Experts attribute this change to deforestation and warn that extreme events like droughts and floods will be inevitable if rampant deforestation is not curbed.

While the amount of annual rainfall and the number of rainy days have increased in South Interior Karnataka (SIK) and Malnad regions, there is a reduction in the amount of annual rainfall and a marginal decrease in the southwest monsoon in North Interior Karnataka (NIK) and coastal regions from the 1960-1990 period to the 1991-2017 period, the study noted.

Dr GS Srinivasa Reddy, Director, KSNDMC, told Mongabay-India that they have observed huge changes in the rainfall pattern and the amount of southwest monsoon rainfall, which occurs in June.

It can have a huge impact on the people of NIK because there is hardly any flowing river in the area during the June-July period, which is also the harvesting season, and the people of the region depend on southwest monsoon for drinking water as well, Reddy added.

The analysis of mean rainfall variation at state, regional and district level shows both positive and negative shifts. The observed positive change in rainfall (mm) in districts varied between 4 mm (Belagavi) and 119 mm (Shivamogga), whereas the negative shift observed ranges from -314 mm (Dakshina Kannada) to -7 mm (Bengaluru Rural).

The study also noted that there was a marginal increase in pre-monsoon, southeast monsoon and annual rainfall In the state, whereas southwest monsoon rainfall showed a decreasing trend. An increase in mean rainfall was observed in Shivamogga, Hassan, Kolar, Mysuru, Chitradurga and Bengaluru Urban districts and a decrease in mean rainfall was observed in Kodagu, Kalaburagi, Yadgir, Bagalkot, Vijayapura, Uttar Kannada and Dakshina Kannada districts.

Several studies have shown that the climate system is continuously changing and people are experiencing the significant impacts of climate change, including changing weather, rising sea level and natural calamities.

Environmental activist Akhilesh Chipli, a member of a non-governmental organisation SWAN and Man (Save-Wild-Atmosphere-Nature and Man), said that deforestation is the root cause of the changing rainfall patterns in Karnataka.

In NIK, Malnad and the Western Ghats, since the 1980s, rampant encroachments, monoculture plantation drives and other developmental activities have been carried out, because of which the natural forest cover has severely decreased, he added.

Another study by the IISc revealed the loss of evergreen forest cover in the Western Ghats from 16% to 11% from 1985 to 2018 with the increase in anthropogenic (caused by humans) pressure owing to unplanned developmental activities.

The study further said that large-scale changes leading to deforestation, with land degradation, contribute to 20%–25% of anthropogenic carbon emissions. The immediate effect is the increase in carbon load in the atmosphere and the cumulative impact is global warming, changes in the climate and ecosystem degradation, it added.

The loss of forest cover has modified the local rainfall regime owing to the changes in heat and weather processes and can cause extreme weather conditions, it added.

Lower evapotranspiration (sum of evaporation and plant transpiration from Earth to the atmosphere) with deforestation across the region caused a delay in onset of the rainy season and decline in the number of rainy days with higher dry conditions, the study added.

Water activist Rajendra Singh—known as the waterman of India and the winner of the Ramon Magsaysay Award in 2001—told Mongabay-India that trees release oxygen as well as humidity and play an important role in evapotranspiration. So trees are responsible for micro-cloud formation, which attracts macro clouds, which increase the possibility of rain, and when there are no trees or fewer trees, there will be no or less rain, he added.

Locally, the reasons for the lack of rainfall is very difficult to point out but whatever is mentioned in IISc study (deforestation) can be a reason for reduced rainfall, said KSNDMC’s Dr Reddy.

The occurrence of extreme weather events has increased both in terms of frequency and intensity across Karnataka in the last decades. The data mentioned in the KSNDMC study show that the hydro-meteorological disasters such as drought, flood, hailstorm, cyclone, heatwave, thunderstorm and lighting events have occurred in the state more frequently in recent years.

Between 2001 and 2019, the state has experienced a drought of varying severity for 15 years. Some talukas have been drought-affected consecutively for more than five years.

Karnataka also experienced severe floods in 2005, 2009, 2018 and 2019. The recurrence of droughts and floods because of changing rainfall patterns caused by climate change would be detrimental to the surface and groundwater recharge and also pose a great challenge to water security, the study highlighted.

The risk of cyclones in the Arabian Sea, storm surges and sea-level rise has made the population settled along the coastline in the state, leaving them vulnerable to the impacts of these disasters and potential loss of land owing to erosion. The extreme weather events have caused the loss of human life, livestock, critical infrastructure, private and public property.

Rajendra added that the crisis caused by the lack of rainfall in the area is man-made and “because of the lack of planning by a few on the top is hurting the entire state.”

The crisis can be solved by proper management of resources and deforestation should be curbed, he suggested.