A Protector And Educator Rolled Into One 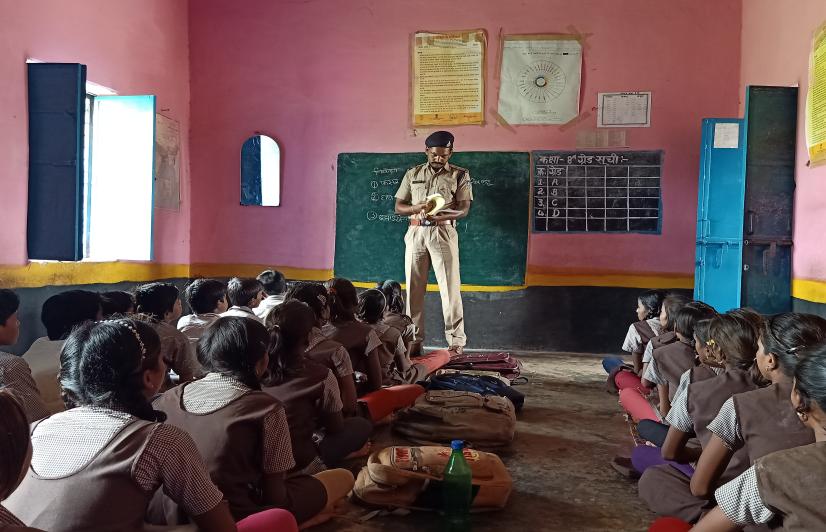 Kumhari, Madhya Pradesh: As you walk through the classrooms of the Government Higher Secondary School in Kumhari in Madhya Pradesh, it is hard to miss the person teaching in Khaki. As schools across the country are looking for innovative methods to educate the students, this school in Damoh district has the local Station House Officer (SHO) as a visiting faculty.

Sub-inspector of Kumhari police station in Hata subdivision, BS Thakur, teaches the students while serving as a public servant. While the ever-increasing crime rates are a cause of concern, Thakur has managed to bring down the crime rate in the area and informs the younger generation of happenings in the world.

Thakur’s career has seen a few shifts. He started as a teacher in a local school and then became Sarpanch before becoming a sub-inspector while continuing his stint as a visiting teacher in the local school.

He has garnered a lot of respect among the students as well.

Monika Yadav, a student of class 12, said Thakur takes a period every week to educate them and he speaks to them about traffic safety and national parks using mnemonic methods.

Sometimes he takes two to three periods a week of 45 minutes each, she informed.

As a police officer, he also speaks about the prevalence of crime and social evils in the society. In one of his classes, he spoke to the students on how to detect and avoid being scammed.

Kirti Kurmi, a class 12 student, said Thakur talks to them about women empowerment and how to seek help using the toll-free numbers.

Another class 12 student Anushree Jain said station in-charge Thakur speaks about addiction and substance abuse and how to tackle it.

Dipanshu Jain, a student of class 12, said Thakur spoke to them about the rumours regarding child-lifting gangs. “As we learn new things, we go and share it with our family and pass on the information that is provided to us,” he said.

RK Pateria, a teacher at the school, said SHO Thakur informs the students about important issues such as traffic safety, addiction and rumour of child-lifting gangs, which, he stated, helps the students grow up as balanced and well-rounded individuals.

He added that few methods of teaching employed by Thakur help the students in other subjects such as Mathematics, History and Geography.

BS Thakur said whenever he gets any extra time from his regular duties, he goes to the local school to interact with the students. He added that the children are the future and he tries to keep them updated about the crimes and some of the things he had learnt while he was preparing for the post of sub-inspector.

He stated that since he has worked as a teacher before, the skill of teaching comes out in different forms.