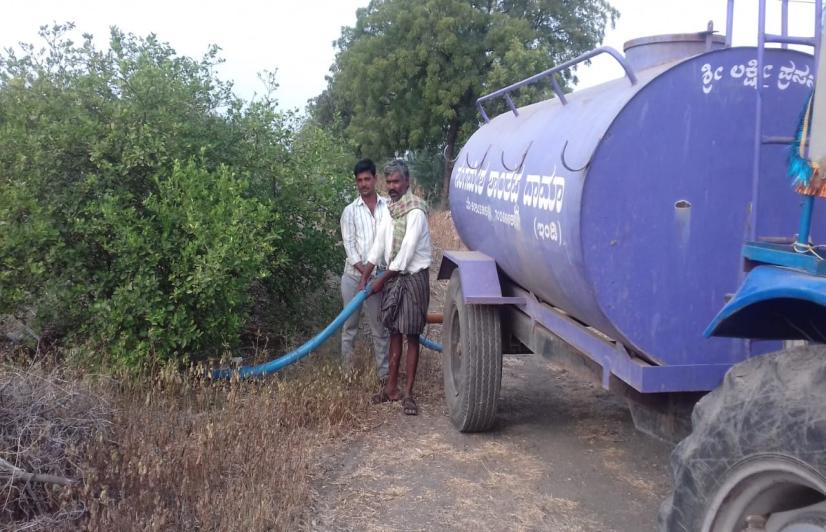 Story in Brief: Four successive years of drought has hit grape and lemon cultivation in Vijayapura. Farmers are seeking loan waivers and irrigation support from the state and center. Their for export crops are failing due to the rainfall deficit compounded by a lack of water for irrigation and a severe pest infestation.

Vijayapura: Of 176 taluks in Karnataka, 156 have been officially declared as drought-hit based on central guidelines. Nowhere does this become more evident than in Vijayapura, the largest supplier of grapes and lemons for export in Karnataka. Farmers are fighting drought conditions, lack of water supply for irrigation and pest infestations to keep their crops from failing.

Mahadevappa Patil from Kanamadi village in Vijayapura has so far spent around INR 30,000 to save his eight-acre grape plantation. Around 70kms away, farmer Shivayogi Madyal of Almel village in Indi has also spent INR 18000 to irrigate his five-acre lime plantation.

Both are tackling the problem of consecutive droughts destroying their crops and draining their finances. Both crops require adequate rainfall. The district gets an annual average rainfall of 434 mm, but the failure of the South-West monsoons has hit farmers hard.

“I have two options, either helplessly witness my plantation get destroyed by drought, or struggle to save them till the next monsoon arrives. Both choices are almost equally dangerous,” said Madyal.

The 50 percent rainfall deficit this year has led to borewells running dry causing more distress all around. While some farmers can afford to spend on water tankers to fetch water for irrigation, a majority are dependent on rainfall.

Abhaykumar Nandrekar, State President, Grape Growers Association spoke about why lemon and grape growers have an uphill struggle to save their crops. “Grapes and lemon plants wither away completely if they don’t receive adequate water. In such cases, replantation remains the only option for farmers and that comes at a steep expense. These crops need around four to five years to yield fruit. Which is why farmers struggle to save their crops,” Nandrekar added.

Karnataka is well-known for its grape varieties, from Bangalore Blue to Thompson Seedless. The state has a production base of 0.3 to 0.35 million tons of grapes and Vijayapura is one of the major production zones for grapes in the state. Other than grapes, the district’s major export also includes lemons. In 2016-17, Karnataka accounted for 23.72 MT/ha of lime and lemon production and 18.40 MT/ha of grapes.

Horticulture Department data shows that currently grapes are cultivated on 20,000 ha in Karnataka while the share of Vijayapura is 12,400 ha.

Despite being the largest exporter of grapes and lemons from Karnataka to the Middle-East and neighbouring countries, government authorities are slow to respond to the needs of these drought-hit farmers.

According to Nandrekar, grape farmers have borrowed INR 1150 crore in loans from nationalised banks, of which accounts for over INR 400 crore in only interest terms.

“For over five years, we have been urging the central government to waive-off these loans or the interest accumulated because these were borrowed from nationalised banks. Till today, they have done nothing. The state government has offered to pay the remaining amount, if the center bears a share of the financial burden, but that has also not taken place,” Nandrekar clarified.

Other than combating drought, grape farmers in Vijayapura are also having to protect their crops against a pest infestation from the Stem Borer. These pests thrive in arid climates and destroy crops by feeding-off the stems, drying the crop as a whole.

“The drought has already squeezed our earnings, and this pest infestation is making our lives more miserable by destroying our crops,” said Nandrekar.

Lemon farmers have been given some respite in this regard, as this pest attack doesn’t impact their crops. However, the lack of irrigation is driving farmers to explore various means.

Basavaraj Kattimani, a lemon farmer in Chadchan village said that farmers have been requesting the state government to offer financial aid to meet expenses of hiring water tankers to irrigate their plantations.

To aid drought-affected farmers in the state, the former Congress-led government of Chief Minister Siddaramaiah established the Lemon Development Board. The Board has been set-up in Indi taluk of Vijayapura, but doesn’t have full-time staff or adequate funds.

The state government gave INR 2 crore to the Board, but no directions were given on how it can be utilized. Recently, a decision was taken by the Board to use INR 1.5 crore to provide financial aid to farmers to protect their crops. But it has drawn criticism from farmers for the amount is inadequate to address their needs.

The drought-hit grape and lemon farmers are looking to M. C. Managuli, the Horticulture and Minister In-charge of Vijayapura to get them help and financial aid from the government. Like the lemon and grape crops that take three to four to yield fruit, it remains to be seen if the plight of the farmers dealing with the fourth year of drought get addressed. EOM.