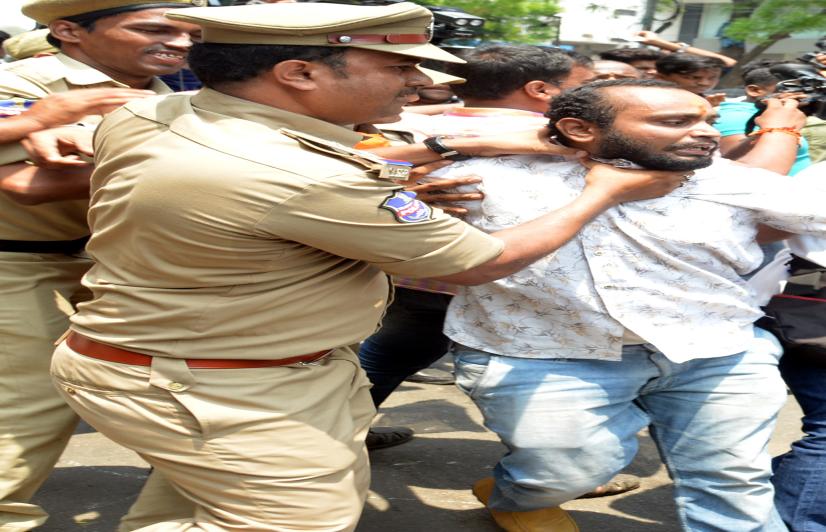 Hyderabad: Maithili, a second-year intermediate student from Bommalaramaram on the outskirts of Telangana’s state capital of Hyderabad, dreamed of building her career in the field of medicine, but ended up killing herself in her house early Wednesday.

The girl who fared extremely well in her first year exams failed to get even the pass mark in subjects like Physics and Zoology as per the results published by the Telangana State Board of Intermediate Education (BOIE) on April 18. Blaming the board, her parents said she was a bright girl hoping to get into the medical stream with a decent score in her intermediate exams.

In the last 24 hours, three students have taken their lives, taking the toll to 19 in Telangana in the span of one week. According to the parents, what has caused this tragedy is an error on the part of the software solutions firm, Globarena Technologies Private Limited, which had been engaged by the intermediate board in September, 2017 for development of software to process admissions, pre-examination, post-examination results, including OMR (optical mark recognition) scanning.

Students and parents squarely blamed the firm for the blunders that found their way into tabulation and preparation of marks memos after evaluating the answer sheets.

TRS former MLC Pathuru Sudhakar Reddy said the allegations linking KTR with the software firm were baseless. The agency with the lowest bidding was shortlisted by the intermediate board for the project through due tender process, he said.

The Telangana government constituted a three-member expert committee to probe the allegations of goof-ups in results.

The spate of suicides intensified the protests which faced a blanket ban in Hyderabad during the first stint of Telangana Rashtra Samithi (TRS) founder K. Chandrasekhar Rao as the first chief minister of the country’s youngest state. KCR returned to power with a massive mandate four months ago in December, 2018.

Students backed by opposition parties, youth, women and rights groups resorted to gate-crashing Pragati Bhavan, the official residence of the Chief Minister, and the office of the Board of Intermediate Education, and have courted arrests in the last few days.

Under the shadow of police

The BOIE office at Nampally is flocked with hordes of students seeking to question goof-ups that have caused a state-wide furore, but it continues to be reeling under a shadow of gun-toting police.

Rajani, mother of a Class-12 student, complains, “My daughter scored 85 percent in all the subjects in the second year, but failed in Mathematics”. Rules will not permit her to seek improvement by appearing for supplementary exams as she has failed in a subject. Her pleas for revaluation which will enable her to take the national level entrance tests for admission go unheard in the BOIE office.

Rajani said there are instances of awarding marks for students who were absent in the exams. “A student identified as Naveena, who topped in her first year exam, failed in Telugu in the final year. After re-verification, she got 93 per cent in the particular subject,” said S Ramesh, a student  leader.

Telangana broke the record in student suicides this year. It registered eight suicides in 2018. In the year 2017 both Andhra Pradesh and Telangana witnessed more than 50 students kill themselves in a span of two months (September-October).

M Madhusudan Reddy, president of Telangana Government Junior Lecturers Association, sees a marked difference in nature of suicides being reported now when compared to those in the previous years. “The rank war and subsequent stress induced by college managements and parents abetted students to commit suicides in the past. This time it is the blunders of the software firm that left a trail of suicides,” says Reddy.

What is the trigger?

Around 10 lakh students took the Class 12 exam in February, 2018 and nearly 3.5 lakh failed making it a gigantic task for the board to conduct supplementary exams for such a large number of students.

Education Minister Jagadeeswar Reddy criticised the opposition parties for trying to gain political mileage out of a sensitive issue pertained to the lives of scores of students.

Globarena, currently under the scanner, is facing a cheating case in Andhra Pradesh following a complaint lodged by its client Jawaharlal Nehru Technological University-Kakinada for allegedly delivering substandard services and the case is pending investigation in Sarpavaram police station in East Godavari district.

Up to the academic year-2017-18 (March, 2018 examination) the BOIE used to engage the Centre of Good Government (CGG), a state-run agency, for data processing and the result processing was entrusted to private agencies with a good standing. Later, Globarena became a sole software provider for the board.