2 weeks on, no headway in probe of man found burnt alive 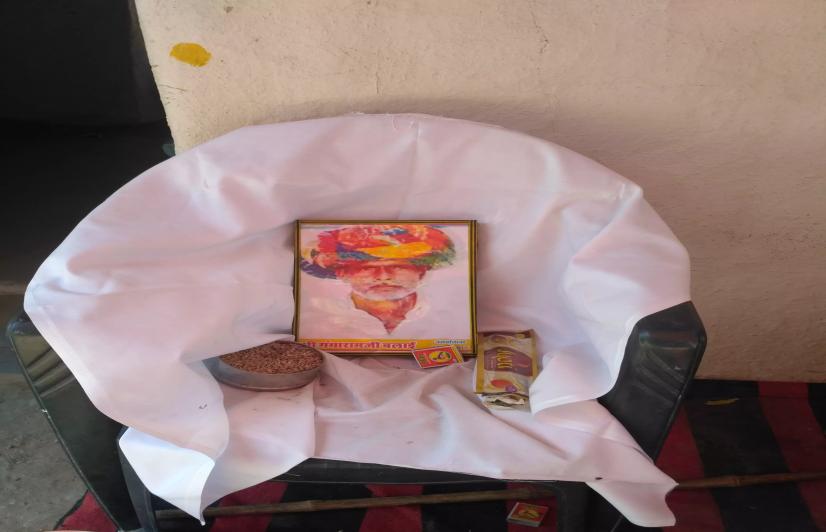 Facts behind the alleged suicide of Gangaram Balai

Jaipur, Rajasthan: A blurry photograph of Gangaram is placed on a chair just outside his mud house in the Ummaidnagar village located in the the Bhilwara district of Rajasthan. Gangaram Balai (60), a Dalit man, was allegedly burnt alive on March 1, 2019 in the Mogarwasa mining area of Kasyan village, almost 100 km away from his native village. Almost two weeks have passed Gangaram was in the gardener in charge of growing vegetables in the mining area.

Narayan Balai, brother of Gangaram Balai, filed an FIR in the Bijolia police station on the day the incident took place  in front of the mining company's office. In the FIR, Narayan Balai asserted that his brother Gangaram was tied to a tree using a wire rope and tires and then allegedly burnt alive.

The police said that the laborers working in the mine are being detained and questioned. So far, more than 15 suspected people have been detained, said the police. However, they haven’t arrested  anybody yet.

Yogesh Yadav, the Superintendent of police of Bhilwara district said that according to the post- mortem report, Gangaram died due to burns. He also added that his body was not moved and he died in the same place where he was found immolated.

The police found a suicide note in Gangaram’s clothing where there was the mention of trouble related to his daughter’s marriage. However, Gangaram's elder brother Narayan (65) asserts that Gangaram was not married and was only literate to sign. He suspects that the letter had been written in advance and planted in his pocket. The Forensic Science Laboratory (FSL) team had also gathered evidence from the spot, whose report will be out in a few days.

Bijaulia police station in-charge Baldev Ram said that all the angles are being investigated. They added that suicide is one of the possibilities they are looking at but, the case has been registered under Section 302 of IPC which deals with punishment for murder.

Meanwhile, social activists have moved into action due to the news of the alleged killing with several of them even visiting Gangaram’s house. Tara Chand Verma, member of the Rajasthan Human Rights Law Network, said, “I have visited the village of Gangaram and the site of the incident. It is clear that it is a case of murder, but the police seems clueless and is still investigating.” She adds that the administration should immediately give financial assistance to the family of Gangaram and the criminals be arrested quickly.

Ramesh Chand Bansal, a social worker the Adhikar Sandarbh Kendra, is shocked with the administrative apathy and said that this kind of silence is beyond comprehension after a person has been burned alive.

Family members of the alleged victim

Gangaram Balai’s entire family lives in Ummaidnagar of Itamaria Gram Panchayat in Bhilwara district. His elder brother Narayan Balai (65) and sister-in-law Shayari Devi (62) have four children. Narayan recalls that he had spoken to his brother over the phone two days before the incident took place. He also mentioned that Gangaram would visit them in the village at least once in two to three months.

Gangaram left the village nearly 30 years ago and started living on the premises the famous Tilaswa Mahadev Temple in the area about 100 kilometers away. There, he prepared a garden. His nephew Madan (28), said that about four  years ago, Gangaram went to Kasyan village 7 km from Tilaswa, where he started practicing horticulture in stone mining area. After the death of Gangaram, the mining company has compensated the family by giving one lakh rupees. The owner of this mining company is Kailash Chand Meena, a leader of the Congress party.

Ramchandra, Gangaram's childhood friend and a priest for the Balai community, said that the alleged victim had no enemies and that the entire village knew that he was a religious man.

The Bhilwara district of Rajasthan is infamous for Dalit repression. Incidents of people belonging to the Dalit community being beaten up is a common occurrence. There are also instances where Dalit grooms are not allowed to sit on the horse during their wedding which has been reported in the media. Cases of witch hunting where Dalit women are targeted have been reported. According to Tara Ahluwalia, chairperson of the Bal Evam Mahila Chetna Samiti, confirms that 80% of cases of witch-hunting in Rajasthan are in Bhilwara district. There are more than 90 cases of witch hunting in Rajasthan since 1986, she said.

However, Ramchandra mentioned that as soon as people heard the news of Gangaram's death, people from all castes gathered in the village pay their condolences.

However, the alleged victim’s family and the village believe that Gangaram has been murdered. People from several villages protested at the Bhilwara district headquarters demanding the arrest of the killers on March 11.