Violence within four walls and its unspoken victims in Kashmir 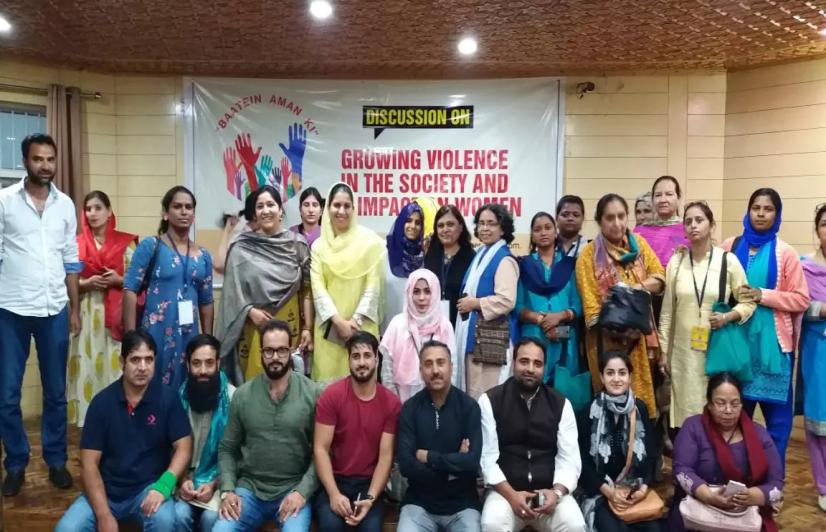 Kashmir: While Kashmir is usually in news for geopolitical tension, violence within the four walls of homes is reportedly increasing in Jammu & Kashmir (J&K). In the state, everything becomes subdued owing to the larger political conflict and whatever does not suit the political agenda—statist or separatist—is given no importance. Violence against women, not only goes unnoticed but is given no importance by society or media, and is very often denied.

In 2016, when violence against women was rising across different parts of India, two Kashmir-based women—Mantasha Binti Rashid and Subreen Malik—while discussing about the cases of violence and abuse that they have encountered whilst working on gender issues, realised that the ground situation is grim and robust action is required to tackle it.

“I felt there was a need to create a space for women in Kashmir and was thinking of forming a Women’s Collective for some time. When I met Subreen and few other women who were of the same thinking, I finally thought of giving it a formal shape,” said Rashid, a founding member of Kashmir Women’s Collective (KWC), a voluntary group to support Kashmiri women against violence and abuse. Rashid is a civil servant with the state industries department and has studied gender and policy at State University, New York.

According to Jammu and Kashmir Women's Commission, it received 142 complaints in 2014, 155 complaints in 2015 and 177 in 2016—incidentally the year in which Kashmir was under curfew for 60 days. A total of 335 cases were registered in 2017. Out of these 335 cases, 277 are from Kashmir division and 58 are from Jammu division. About 95% of the cases are instances of marital disputes—abuse, divorce, child custody, and maintenance.

Malik, one of the founder-members of KWC, has been a practising lawyer for nearly a decade now. Her focus is on cases of domestic abuse and discrimination against women and most of her work is pro bono.

In the beginning, KWC came into being as an online community on Women’s Day in 2017 (March 8). A group of young Kashmiri professionals—mostly women—who were already active in this area, got together to form the collective.

KWC is registered as a trust and is a self-funded voluntary group where group members and a few well-wishers donate out of their own will. At the KWC office in Rajbagh area of Srinagar, one or two volunteers attend to women victims and guide them through the legal options available to them, counsel them, find a means of livelihood for their survival, and if required, fight the crimes and cruelty that is deeply entrenched in the society against women.

Soon after starting, KWC realised that only forming a group and advocating for women’s rights is not enough as they were facing hurdles at every step while working on the ground, stated Rashid. To change this, they widened the scope of work by working at different levels to educate and create awareness among masses about gender. They also advocate for policy work, legal and financial empowerment of women.

Shabnam Ara, a resident of Downtown in Srinagar, was married into a family in Sopore in Baramulla district—45 km north-west of Srinagar. As abuse and demand for dowry kept on rising, she finally decided to come back to Srinagar. Shabnam's in-laws kept her daughter with them. Shabnam's mother-in-law said they have adopted her daughter. After spending five years without making any headway, she went to KWC. A case was taken up on a pro bono basis. ”The order came in my favour and I am able to meet my daughter once a week. I also got a maintenance order in my favour. KWC also helped me in getting a job,” she said.

According to the J&K Protection of Women from Domestic Violence Act, 2010, a state is required to have Protection Officers (PO) and Shelter Homes (SH) for the victims of domestic violence. “It’s been nine years of the act, there is not even a single SH or PO available for the victim-survivors of violence,” she alleged.

In June, the district administration admitted to the issue and agreed to come up with a shelter home within two months.

Crimes against women are denied and unacknowledged, firstly owing to the focus on political conflict, and secondly due to society being a homogenous and a conservative set-up in which although understanding of political and other human rights is high, but the recognition of women's rights as human rights is a far cry.

Change is often opposed with resistance and it was a similar case for KWC. In a state where every issue boils down to choosing a side, KWC has been on both sides. While they had to register a case against human-rights activists who blamed them for being statist, they also registered a case against a police officer who accused them of separatist political tendency.

(KWC helped women to file cases who came to them without bias or taking sides. KWC personally do not file the case rather help women to file the case. In one case the accused was a human rights defender and in another case the accused was a police officer. They helped both of them on rational grounds and because they do not side with any one. They are being labelled by accusers. for example; If a person is of separatist ideology, he labels them as agents and if the accused is of political ideology, he labels them as separatists just to prove their own point.)

Amidst this, they work voluntarily and tirelessly. They introduced ideas like gender sensitivity which doesn't go well in the close-minded society. When they conduct workshops in youth in colleges on sexual harassment, they are abused for being Westerners.

Need for such collectives

The group has conducted a women’s consultative workshop, a police sensitisation workshop and a book release on transgenders in Kashmir. Additionally, they have carried out gender sensitisation workshops in different colleges, workshops with school teachers about the legal, psychological and medical aspects of child sexual abuse among other activities. They also carried out a study on The Protection of Children from Sexual Offences Act, 2012.

Talking about future projects and goals, Rashid mentioned that they are pressing the state government to establish SHs and appoint POs. They have also designed a project to tackle sexual harassment in public transportation, which will be implemented as a collaborative project between KWC and district administration of Srinagar as a pilot project.

Noted poet and historian Zareef Ahmad Zareef stressed the need of such collectives. He said that collectives like KWC are needed in any society. He stated that such collectives are more important for Kashmir since the administration is slow and not accountable to anyone and the execution of any law or order is only on papers. He added, “When young people take up any challenge and volunteer, they do it seriously and reach to grassroots. For them it’s not mere work that people generally do for livelihood, it’s a cause that they care about. We should appreciate and support these networks to make our society stable as they are working for the weakest and the most vulnerable section of our society.”