TMC gets own 'force' in West Midnapore: Jai Hind Bahini to campaign for LS polls, provide security to party leaders 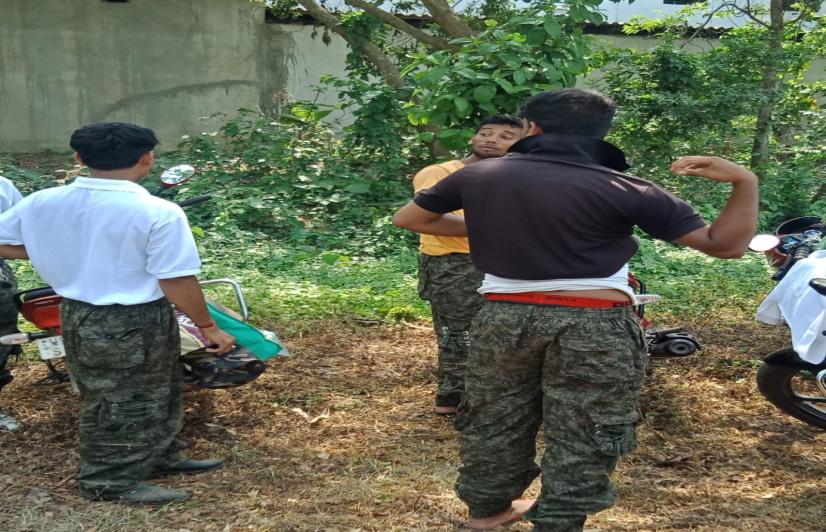 At first glance, their dress and boots resemble closely the uniforms of the state’s police or paramilitary forces. Look closely, and you might spot the Trinamool Congress (TMC) party logo embroidered on their shirts or T-shirts. They number a few hundred and call themselves the Jai Hind Bahini (JHB) and are functioning only in the West Midnapore area, which has a sizeable tribal population.

Their presence in the area and their activities came to light when a Bengali newspaper recently reported that the TMC had created this force as a response to the special task-force that the Centre said it would deploy in the area during elections. The paper reported that JHB members were visiting villages and homes and campaigning for the TMC in the PIngla area of West Midnapore.

"We have 400 cadres in our Bahini and we aim to make our team even stronger before the elections,” said Ashfaq Ali*, (name changed) an active member of Jhargram TMC youth wing. “If the party needs to, this group will be sent to other districts.” When asked who these men are and where they are from, Ashfaq Ali said they were TMC supporters who have been working with the party for the past few years. “Some are part of TMC’s Youth wing, not necessarily from this block only but also from West and East Midnapore."

In 2018, the Indian Army had urged civilians to avoid wearing clothes with 'disruptive patterns' after the Pathankot attack. A set of guidelines was also issued to the public earlier.

JHB’s existence got media attention when Tollywood actor and TMC's Member of Parliament from Ghatal, Deepak Adhikary, popularly known as Dev, reached Pingla to hold a political rally. Mediamen noticed that instead of the police or other state security personnel, the only people managing the rally were from JHB. Debmalya Bagchi, a reporter with Anandabazar Patrika (ABP), who was covering the TMC’s MP sabha (as the rally was dubbed), told us that “initially, even we had no clue about who they were. They were wearing khaki pants and white T-shirts, even the shoes were similar to those worn by paramilitary forces. I asked one of them who they were and they said they are part of TMC's Jai Hind Bahini. They had a Trinamool logo embroidered on their T-shirts." But after the first reports about JHB appeared in the media, its men seem to have gone underground, with the party leadership refusing to speak on the subject.

But why is the JHB only found in West Midnapore district? Speculation is that Chief Minister Mamata Banerjee is taking extra precautions to ensure her party does not lose this seat. Jhargram, a Maoist belt where top Maoist leader Kishenji was killed in an encounter, was earlier part of West Midnapore and the tribal of the region are apparently disenchanted with the state government for promises made and not kept.

And the BJP has been appealing to the tribal sentiments here, hoping to reap the same rewards they did in Tripura using similar electoral tactics. In fact, the BJP has been targeting West Bengal, particularly in recent times, hoping to break into Mamata’s stronghold to make up for seats they are likely to lose in the Hindi belt.

BJP candidate Bharti Ghosh, a former IPS officer once close to the Mamata team accused JHB of violating Election Commission's guidelines. "Local residents cannot make out the difference between TMC's men and the state’s forces,” said Ghosh. “These men are visiting villages and campaigning for votes". Bharti further said she knows where these uniforms are being made and by whom. The state BJP leadership has reportedly complained to the EC about JHB’s activities.

Discussing the same, Samir Kumar Mitra, former DIG of BSF, who served the force for more than three decades, said, "Probably the TMC people have provided these men the DM boots and some camouflage printed trousers that are available locally. But in any situation, any civilian or any political party member using this type of uniform is absolutely illegal."

He also mentioned that the easiest way for the villagers to mark these men would be by their badges and caps. "If these people are part of the security forces they would have some sort of Standard Operating Procedures(SOP) or drill format with them which I think in this case, remains missing. If an individual belongs to the force then only they can use the badge or the cap. Villagers should be made aware of the same so that they can spot the difference."

"No political party could possess the right to introduce such uniform and then engage in political activity, especially when the area has had a history of Naxal activity," he added.

On being asked about JHB's and its controversial uniform Ajit Maity, Trinamool Congress block president from Pingla said Mamata Banerjee had formed the JHB in 2015. “This is just like NCC,” said Maity. “The Bahini is to maintain peace in the area when our party leaders are visiting. They are there to manage the crowd and make sure there's no reckless activity and that's it." Responding to Bharti Ghosh’s allegations, Maity said that “she is panicking on seeing no one coming out in her support."

After several failed attempts, this reporter was finally able to speak to Shaikh Kashim Ali, president, Jai Hind Bahini, over a phone call. He admitted JHB men do wear clothes with a military print but insisted they have nothing to do with the elections. “These men were just clearing the parking area where Dev was conducting the rally,” said Kashim Ali. "It is just like the TMC youth wing. We mostly work as volunteers at major political events. We have close to 100 people in every block and there will be 20-30 people supervising them”.

Some research on the JHB revealed that it is mentioned on the All India Trinamool Congress website, where it is stated that it was formed on January 12, 2015. The website also carried a report of a formal event unveiling their uniform which is blue and white. There is no mention of anything similar to a military uniform. TMC's website also claimed Jai Hind Bahini will be engaged in apolitical social work and arranging cultural programmes.

“The website says white and blue shirts, there is no mention about pants,” said Shaikh Kasim Ali when asked about the military looking uniforms his “volunteers” wore. “And if we consider adding rank and stars, that is an internal decision, I am not liable to give an explanation about it to anyone”.

We reached out to West Bengal Chief of Election Commission, Sanjay Bose and Additional Commissioner of Police (I), Jawed Shamim, both of them denied commenting on the same. But Gen Shankar Roy Choudhury, former Chief of Army Staff, said that “if these people are involved in poll campaigning and have copied the uniform or are posing as a central force, it must be challenged before the Election Commission”.