In First 2019 Cow-Vigilante Attack, Man Transporting Buffalo Is Tied To Pole, Beaten By Mob, Then Chained By Police 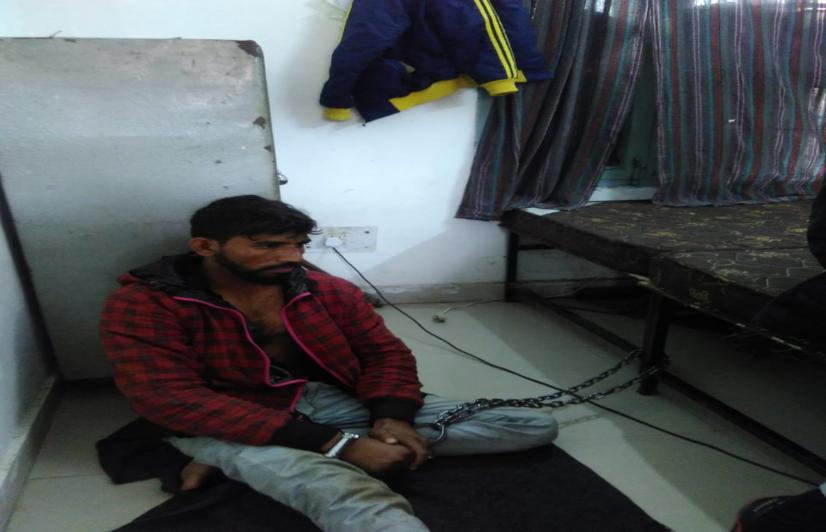 Rohtak: Three days after a 24-year-old Muslim youth was beaten for hours after being tied to pole for suspicion of cow smuggling, the Bhalout village with a population of over 8000, conducting its activity like normal days.

No one is ready to talk on this subject as if nothing happened. Balbir Singh, village head of Bhalout located on Rohtak-Sonipat road, some 8kms from district headquarters, said he cannot give details of event as he was not present.

“Those who beat Muslim youths were outsiders not from our village. All in the villagers are mum, I was not present at the spot but something happened”, Balbir added.

He says that it is a police case now, so villagers are avoiding coming under ambit of investigation agencies.

Naushad Muhammad, who is planning to get married in coming months, said that though he hails from Shamli district of Uttar Pradesh but has been working in Haryana for a decade.

“I used to understand this place like my native home town in UP. On January 19, I was carrying buffaloes in pick-up jeep and was heading towards Bhadaout (UP) cattle fair”, he recalled.

He said that since it was like a routine custom for him and two others accompanying him in jeep to pass through Hindu dominated villages so they were unsuspecting of foul play.

“Around 8pm on January 19, I noticed a scooter chasing our vehicle mindlessly and shouting something. As I stopped the vehicle to find out what happened, the man in his forties overpowered him and started shouting ‘gau taskar’”, he said.

He said that out of small shops and houses youngsters swooped at the spot and snatching his hair, ears and beating with helmets.

“And they dragged me on road and tied to a pole. Anyone who was arriving at the spot to find out what happened was either slapping or kicking me leaving me bleed”, he said.

Someone from the mob snatched his bike keys and 2000Rs and pressurized to accept that he was a cow smuggler. “Two others who were with me had fled from the spot sensing danger. I kept pleading them that it was buffaloes not cows but they did not pay heed”, he said.

Later, cops arrived after two hours and took him with them to local police station.

“Cops at police station asked me whether I was a cow smuggler or not. I told them the truth. I asked them to take me to hospital but one of the cops gave me a pain killer and handcuffed me to bed in police station”, he claimed. He said that since he was facing police case, he would prefer to attend trial for the truth sake and stay in Haryana with his existing job. “If I am innocent, I have nothing to fear. When scores of youths were beating me at Bhalout village, an elderly man shielded me and risked his life. There are good people everywhere”, he summed up.

Jashpal Gumana the accused named in the FIR insisted that he should not be associated with cow vigilante group. “I respect cow as mother and make donations anonymously. I rear two cows at my home and feeding hungry cows and treatment to injured cows in my favourite pastime”, he said.

Explaining his side of story, Jashpal Gumana said that he was returning to his house in Sonipat district on January 19, when he heard cows bellowing from the jeep.

“I tried to stop them but they tried to ran over me on my scooter. I somehow made them stop near Bhalout village on Rohtak-Sonipat road and was talking to Naushad to find out whether he was carrying cows or not”, he said.

He said that hearing their shouts, youths from village joined them and started beating the Muslim youth mercilessly. One of the man from village tortured Naushad with burning beedi. “I tried to intervene but to no avail”, he said. He said that a police case has been registered against him but he was not fearful as he had tried to do it for holy cow equivalent to mother.

Station House Officer Inspector Manjeet Mor vehemently denied that Naushad was chained in police station and was not taken for treatment.

“Naushad was sent to home on the same night of January 19 since there was no complaint against him till then. A complaint was filed against him on next day, and a case was registered against him under section 11 of Prevention of Cruelty to Animals Act, 1960 and under Haryana Gauvansh Sanrakshan and Gausamvardhan Act, 2015. He said that on the same day, a case was registered against 15-20 villagers on the complaint of Naushad under sections 323 (voluntarily causing hurt), 341 (wrongful restraint), 342 (wrongful confinement) and 506 (criminal intimidation) of the IPC.

Advocate Rajkumari Dahiya said that they rushed to Sadar police station when they learnt about an ‘innocent’ Muslim youth being beaten and kept in police custody.

When a delegation of civil society reached they were shocked to find Naushad was chained in a room inside police station with open wounds and not taken for medical examination.

“We met Rohtak SP Jashandeep Singh Randhawa who assured the delegation to enquire the role of police and action if laxity is found”, she added.

Preet Singh, a social activist accompanied the delegation said that cattle traders are being harassed by cow vigilante groups in similar fashion. It has vanished the trade of cattle traders and suspecting being caught and harassed by goons, outsiders do not come in Haryana, he added.

Assistant Superintendent of Police Masood Ahmad said that a SIT has been formed to look into allegations and counter allegations into the matter.

“Everyone’s role is being scrutinized and due action would be taken against the accused as directed by SP Rohtak”, he added.