As rescue stalls, illegal mining comes under the spotlight 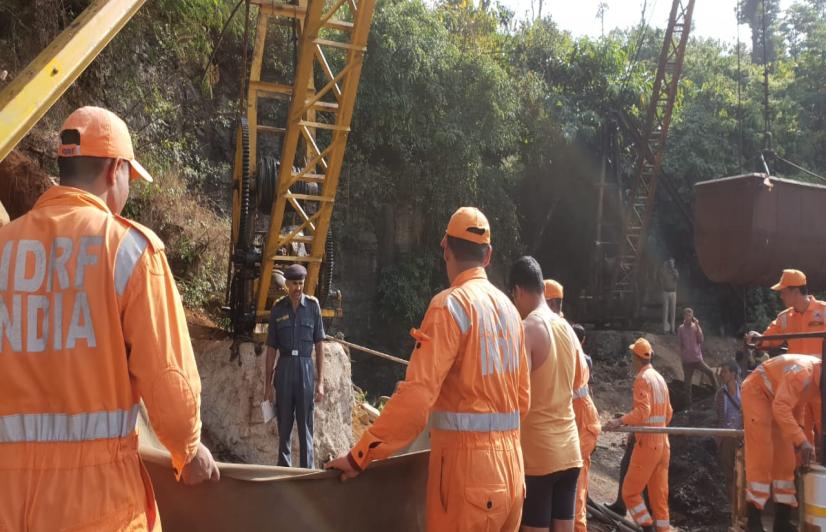 Abdul Hussain, 25, from Panbari village of Assam’s Chirang district is thanking his stars. A dropout and unemployed, he used to illegally mine coal crawling inside the rathole-like mines in East Jaintia Hills of Meghalaya but left a week before many of his fellow miners got trapped there.

On December 13, at least 15 miners got trapped in the 320-foot hole after water gushed into the mine. While rescue operations were started, and later temporarily suspended, it’s not known whether the victims are still alive.

And ironically, this tragedy is what has silenced Meghalaya government’s repeated denials regarding illegal mining.

“I worked at the mines for five years. It’s, perhaps, the riskiest job in the world; they are ratholes of death. It’s always pitch dark and, in places, swampy and watery... But you can earn as much as Rs 2,000 a day, and for a poor person like me, that’s a huge sum; life, then, holds no meaning,” said Hussain.

“We are small-time miners; the sardars (local managers) would say mining will continue, come what may. (And that appears to be true as) Police never stopped any trucks transporting large consignments of coal.”

When it all began

Meghalaya’s coal story dates back to the British Raj. It was in 1815 when a coal deposit was first found in Khasi and Jaintia Hills region, both part of Assam then. Mining started in the Jaintia Hills first.

Dating to the Eocene age, Meghalaya’s reserves of 576.48 million tons of sub-bituminous coal are 36-56 million years old and spread across the state.

After Meghalaya became a full-fledged state in 1972, commercial coal mining gathered pace in the 1980s, becoming one of the main sources of revenue.

However, the miners are given no safety equipment; there are hollow pipes to talk to the crane lifters but no separate oxygen supply inside.

The lone survivor of the December 13 accident, Sayeb Ali from Assam, said, “Anyone who works in these ratholes knows that it’s a tight-rope walk between life and death daily. A lot of minors are used for this work for their agility. There are no checks whatsoever; I am lucky to have survived.”

Mocking the ban and how!

The National Green Tribunal (NGT), in 2014, had imposed a blanket ban on coal mining in Meghalaya. The order came after the green court heard a petition by student bodies and civil administrations from Assam, Meghalaya’s neighbour on its western, northern and southern sides.

The petitioners had raised the issue of environmental degradation, including water contamination, soil pollution and an adverse effect on underwater hydro-electric projects, due to unregulated and unscientific mining.

The green court also emphasised on the report of O P Singh, professor of environmental studies at North Eastern Hills University in Shillong, which explained the environmental concerns arising from mining activities in Jaintia Hills.

“I believe there is a nexus between the coal mafia and politicians, which is what has ensured that those involved in this illegal activity roam free. There is also loss of revenue; I am fighting against it all,” said Agnes Kharshiing, 58, the president of Civil Society Women’s Organisation, an NGO working for women’s rights and environmental causes.

Kharshiing was attacked by suspected coal mafia members on November 8 in East Jaintia Hills, when she had come there with another activist to check an illegal mining site. She was dragged into a jungle and assaulted. The attackers fled after locals reached the spot hearing Kharshiing’s screams.

Recuperating from a critical head injury, she said, “The attack on me is to threaten others fighting this menace. Many good officers have been shunted out by the government. As a result, those who are honest are scared to speak up.”

This is the second such incident in Meghalaya. In March, Poipynhun Majaw, an activist vocal about illegal mining by cement companies in the region, was found murdered in Khliehriat, a coal mining hub in East Jaintia Hills.

Over the last two decades, Meghalaya has seen some of the most tragic incidents in its coal mines, and a majority of the victims have been migrant labourers from Assam.

In December 2013, five miners died when cables of a crane used to lift coal up to the ground from a 200-foot deep pit snapped. Before that, in July 2012, a disaster had occurred in South Garo Hills, another hub of coal reserves — 15 labourers had got trapped after water gushed into their mine from an adjacent flooded one.

In March 2009, eight coal miners from Assam were reported missing after getting trapped in a mine in South Garo Hills, while on March 27, 2003, seven drowned when their mine, in the same district, collapsed. In early 2002, 40 miners were killed in the district, and later that year, six more died in two separate mishaps.

“These mishaps are due to lack of a proper mining policy, which the state government should have ensured,” said Patricia Mukhim, a senior journalist and social activist.

Stressing on compensation for the victims, she added, “How can we allow mining without any environmental and human safety measures, or even insurance for the labourers? There is no accountability in this activity; the Supreme Court needs to take an extremely serious view of it.”

Professor Singh, who played a crucial rule in NGT’s order, reiterated that the Meghalaya government is yet to submit an all-inclusive mining policy with provision for health of miners, environmental well being and compensation for the victims.

Challenges before a complete shutdown

Till 2014, at least 1.5 lakh families in Meghalaya were dependent on coal mining for their livelihood. Post the ban, the government hasn’t rehabilitated them or come up with an alternative plan of livelihood.

David Kharsati, who has been voicing the grievances of these families under the organisation Movement for Indigenous People’s Rights and Livelihood, strongly stressed for a government policy on regulated mining, instead of a ban. “These families have been directly affected [by the ban], and God alone knows how they are surviving. Children of many have had to drop out of school, while several have become migrant labourers. The clock is ticking for the government to come up with a clear policy that lets the mining continue without environmental degradation. Also, without the revenue from coal, the state can’t survive,” he said.

But Professor Singh blamed the nexus between illegal miners and state politicians, and opined, “Coal gives easy money but at the cost of environment. So it all depends on the government’s will power. Many politicians in Meghalaya are involved in mining, that’s why it hasn’t been stopped. A major challenge ahead of complete shutdown of operations is finding an alternative livelihood for the families, and the government needs to think of one fast.”