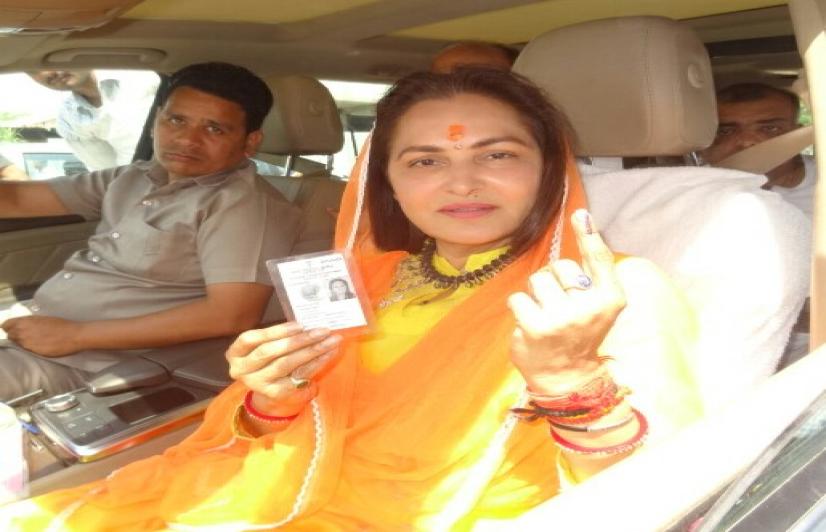 Bengaluru: The Election Commission of India’s various efforts, such as the SVEEP (Systematic Voters’ Education and Electoral Participation) programme and celebrity ambassadors may see success in motivating citizens to vote, but the hassle at polling stations in the times of electronic voting only derails the democratic process by eating up crucial time and testing the electorate’s patience. Multiple incidents of malfunctioning EVMs (Electronic Voting Machines) marred third phase of the Lok Sabha elections held across 13 states and two Union Territories. This phase, which saw the maximum number of seats going to polls (117), also witnessed several violations of the Model Code of Conduct (MCC), apart from some other unusual incidents reported from in and around polling stations.

Reports of EVM malfunctioning started pouring in from the northern states of Uttar Pradesh and Bihar within the first hour of voting. EVM snags were reported at booth number 264, 315, 376, 320, 369 and 339 in Kasganj. Muslim voters in the constituency claimed that this could be a ploy to prevent members of the community from casting their votes. In Bareilly, voting was halted in the early hours of the day at Mirganj, Daulatpur and CB Ganj polling booths due to technical glitches in the EVMs. Reports of voting machine malfunctions filtered in from Bhagwanta, Fareedpur and booth number 57 in Aonla constituency as well.

As Akhilesh Yadav cast his vote in Saifai, he said he was certain that there would be a new Prime Minister in India. The Samajwadi Party (SP) president claimed that all the new EVMs were sent to Gujarat, while old machines were installed in Uttar Pradesh.

Terming the mismanagement of polls as “criminal negligence”, Yadav questioned the scale of EVM glitches being reported from the state. Citing reports that claimed that EC officials were not trained to handle EVMs, the former UP CM wondered whether the glitches in voting machines were part of a larger sinister ploy.

However, Rampur District Magistrate A K Singh was quick to respond, saying he had no knowledge of EVM malfunctions in such large numbers as claimed by the SP leaders. Singh claimed that the few reports of technical snags were closer to what is considered normal and that all machines were replaced promptly.

BJP supporters roughed up an election official, Mohammad Zubair, at booth number 231 in Sambhal Lok Sabha constituency, alleging that he was asking voters to vote in favour of the Gathbandhan candidate.

Nargis, a Muslim voter from the Nabab Tarora booth number 320 in Kasganj constituency of Uttar Pradesh, while waiting for EVMs to be repaired, alleged that the EVMs “were shut” in an attempt to stop Muslim voters from casting their votes. EVM snags were reported from booth number 315, 376 and 369 as well in Kasganj. Abdul Gaffar, a resident of Forbesganj, Arariya was not allowed to cast his vote as he has been declared dead on papers.

Eastern region of the country was not untouched by EVM snags, especially in Assam, where polling took place in four Lok Sabha constituencies---Gauhati, Kokrajhar, Dhubri and Barpeta.

Voters arriving early had to wait for hours at Baghbar under the Barpeta constituency, at Bortola High School under Gauhati constituency and at Thuribari LP School in Kokrajhar constituency of Assam.

“Whoever I voted for, it did not show on the display when I pressed the button. I did not receive any sort of confirmation and the woman who voted after me, did not as well. When the EVM was replaced, the serial number was 103, but it showed 155 in the new machine. How did it suddenly jump to 155 from 103,” asked 28-year-old Mustakur Rehman Saikia, while referring to the EVM malfunction at polling station no 182 in Hatigaon, Gauhati constituency.

A vote in the EVM is confirmed when a red light glows against the button pressed and accompanied by a long beep sound. In case of malfunction, it is to be quickly replaced by sector magistrates and other officials responsible, along with an engineer present on the ground.

Rehman said that he narrated his ordeal to the polling officer and the engineer but they dismissed it saying it is a small matter. “I am not at all satisfied by this and I was waiting for my chance to re-vote but they said this provision is not available.”

Former DGP of Assam and writer, Harekrishna Deka, claims that EVMs may have been tempered with. He said that there was some delay when he went to vote and when he finally did, his vote was recorded for some other party. "There is a serious problem in the system. This is a dangerous thing,” he said. He added that he complained to the polling officer and he feels that we must go to the older ballot system of voting.

Under the East Tripura Lok Sabha constituency, polling was stalled in five polling centres due to EVM malfunctions. Replacements of EVMs were underway, assured an election official by afternoon.Congress candidate in East Tripura Lok Sabha constituency, Pragya Debbarman, alleged rigging in several booths. She said she has lodged a complaint with the EC.

In Odisha, like in  the second phase elections, polling in various places was delayed due to problems with voting machines. Voters were seen in anguish in booth no 232 at Hindol and booth no 193 and 194 in Dhenkanal municipality. EVM glitches were reported from booth no 37 at Karanjia, booth no 212, 213 and 45 in Keonjhar, booth no 34 and 36 at Begunia.

Voting was also delayed at Cuttack’ Raja Bagicha, Badambadi New Colony, Banki, Talabasta, Laxminarayanpur, Radhagobindapur and Taradihi. The situation was similar in capital city Bhubaneswar, as machines went out of order in Ekamra (booth no-112), Bhubaneswar-Central (booth no-32), Unit IV (booth no-57) and Madhusudan Nagar (booth no-70). Voters in Sambalpur, Kuchinda, Karanjia, Keonjhar Sadar, Keonjhar Municipality and Champua areas also had to wait for hours before the could vote.

In Odisha, a gaffe on the part of election officials led to the CEO Surendra Kumar ordering re-polling at nine booths on April 25. These polling booths are spread across four LS constituencies---two each in Sundergarh and Kandhamal, four in Bargarh and one in Aska.

A Biju Janata Dal (BJD) delegation in Bhubaneswar demanded action against Union minister Dharmendra Pradhan, accusing him of violating poll code while interacting with the media at the polling station after casting his vote.

“Campaigning for his political party… at the polling booth and this being telecasted across the state is a flagrant violation of the Model Code of Conduct by BJP leader Dharmendra Pradhan,” the BJD said in its memorandum submitted to the CEO.

EVM glitches were reported in several booths under the Aurangabad Lok Sabha constituency, due to which voting was delayed by 25 minutes. An EVM malfunctioned while sitting MP and Shiv Sena candidate Chandrakant Khaire was voting at Zilla Parishad office in Aurangabad constituency in the afternoon. Polling officials could resolve the issue immediately.

The Gujarat Pradesh Congress Committee (GPCC) complained to the Chief Election Officer about MCC violation by BJP supporters who displayed posters and banners within 100 metres of the polling booth at Nishan School in Ranip when PM Narendra Modi was going to cast his vote.

A voter in Karnataka's Uttara Kannada constituency recorded a video of himself casting a vote on the EVM machine. In the video, it is clearly visible whom he votes for. As the video went viral in the constituency, Karwar deputy commissioner K Harish Kumar said that a criminal case will be filed against the voter. Repetitive glitches with the EVM disrupted voting several times at booth number 28 in Azam Nagar, Belgaum constituency.

Among the southern states, Kerala also witnessed hold up during the voting process as EVM malfunctions were reported from several segments. Polling was expected to go on till late at night due to the voting hours lost during the day.

Party workers and mediapersons across the state went into a frenzy after allegations from CPI-M workers that the VVPAT machine at Chovvara was displaying the name of the BJP candidate when voters pressed the button against Congress candidate.

EC officials rushed to the polling booth and the machine was checked by technical experts.The allegation was found baseless, leading to the CEO warning those who spread false reports about EVMs.

Author is a correspondent with 101Reporters.com