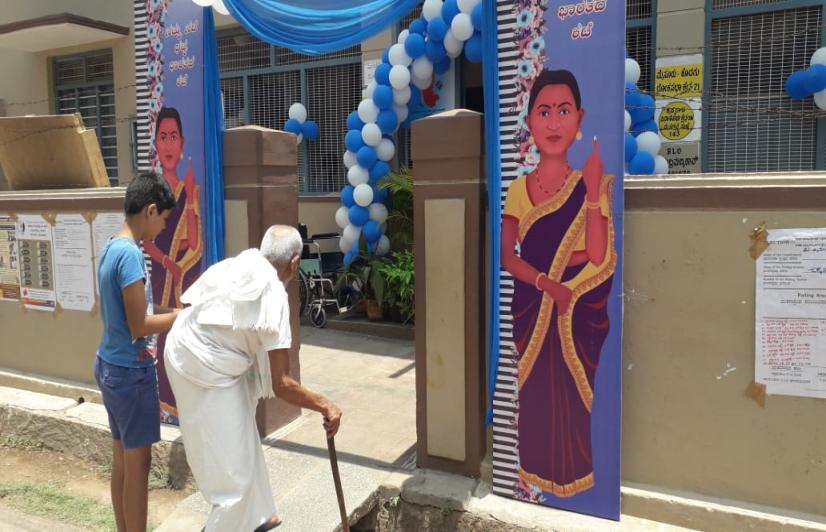 Bengaluru: Fourteen of Karnataka's 28 Lok Sabha seats went to the polls in the second phase of the 2019 general elections Thursday. The usual grievances of technical snags and names missing from the voters list persisted this time too.

Many voters failed to exercise their franchise for this very reason. This included not just first-time voters but also those who had voted previously--as recently as last year’s Assembly and urban local body elections. This issue was reported across Bengaluru and other parts of the state.

Ramesh HK, a resident of Yeshwanthpur Assembly constituency in Bengaluru, said he voted in both the elections last year but when he reached his assigned booth Thursday, he learnt his name was missing from the list. He said he was disappointed at losing his chance to vote.

Kumar and Vinod, two locals from Bangalore Central constituency, said despite holding voter IDs and having voted earlier, they did not find their names in the electoral list and regretted missing out on voting. Kumar said he knew at least 20 other people who couldn’t cast their vote owing to the same reason.

Similarly, Mahadevamma, a domestic worker in Paduvarahalli, Mysuru, said her name was missing from the voters list even though it had the names of all the other four family members of hers. She found it strange since she had cast her vote in previous elections.

Elsewhere in Madhugiri, Tumkur, MI Sheshachar was surprised to find a woman’s photo in the voters list corresponding to his name. Sheshachar said he was disappointed at not getting to vote.

Jeevan, a volunteer in Bengaluru South, criticised the government and the Election Commission (EC) for the fiasco. He said that at his booth and several others, serial numbers of voters and names on the electoral list did not match. Across various booths in Bengaluru South and Central, voters said they waited in long queues only to find their names missing. After a point, volunteers at voting booths began to check voters’ names on the online database through their phones and laptops since the physical document did not contain information corresponding to voters. Prakash, a volunteer at booth no. 170 in Bengaluru Central, said he received many cases of missing names from the voters list and advised them to vote through Challenge Vote.

Documents also show voter names marked with a ‘deleted’ stamp. Another set of voters said they submitted all their details on the EC’s website, only to find their registrations were not processed. Prashant G from Mahadevpura in Bengaluru Central constituency had submitted his voter form on January 30, 2019, itself, much before the registration deadline. Till date, the application status hasn’t moved beyond ‘submitted’.

In booths where voters could find their names on the electoral list, technical glitches in Electronic Voting Machines (EVMs) left them waiting for a long time in this sweltering heat.

Mandya saw the maximum number of EVM malfunctioning cases. Despite seeing a tough battle between candidates, voter turnout was poor in Mandya. Adding to the already slow voting pace--by 9 am only 6% voting was recorded--were technical snags in the EVMS. Machines at a Gandhi Nagar polling booth and booth number 177 in Mandya town reported technical difficulties. As polling personnel arranged for new machines, voting was delayed by an hour.

A similar incident took place at booth number 81 in Rudrakshipura, Maddur, and Mallenahalli in KR Pet, when technical snags in EVMs were reported. At booth 202 in Araginamele village, supporters of independent candidate Sumalatha Ambareesh complained that the EVM buttons required heavy pressure to register their vote.

At booth number 230 in Chamarajnagar constituency, voting was delayed due to technical difficulties. Meanwhile, neighbouring region, Bengaluru, also saw a voting delay. Two polling booths at the Vinayaka school in Dasarahalli, Bangalore North constituency, could not begin the process for two hours owing to a long power cut. Officers at the polling stations had to use their phone flashlights to verify voter names and help voters with the process. This caused incessantly long queues.

In Arekadu, Madikeri, voting was delayed not just due to technical snags in the EVMs but also due to the inefficiency of polling officers. Voters were forced to wait in long queues in the heat as officials arrived only at 8:45 am to replace the machines, almost two hours after the voting process was to begin.

Some parts of the state also witnessed a violation of the EC’s model code of conduct and scuffles that broke out between opposing parties. In Tumkur constituency, police seized cash to the tune of Rs5.49 lakh in Kodigehalli. The accused, Raju, works as a peon at Channabasaveshwara Institute of Technology, which is owned by GS Basavaraj, BJP’s candidate for the Tumkur Lok Sabha seat. According to the local police, Raju received the money from the university to bribe voters. He has been arrested.

In Mandya, the contest between JD(S)’ Nikhil Kumaraswamy, son of Karnataka chief minister HD Kumaraswamy, and BJP-backed independent candidate Sumalatha Ambareesh, wife of late actor-turned-politician MH Ambareesh, took an ugly turn. After voting, Nikhil took out a roadshow, which Sumalatha’s supporters cited as a violation of the code of conduct. They too, then, attempted to stage their own roadshow. A heated argument then broke out between both party’s workers and it escalated into a minor scuffle. The police had to intervene to end the fight.

In an unrelated incident, a volunteer at polling booth 48 in Chamarajanagar Town collapsed and died while on duty. The deceased, Shantamurty, 53, was the principal of GVK College, in Hanur, Chamarajnagar.

The seats that went to the polls are Udupi-Chikmagalur, Chitradurga, Kolar, Bangalore North, Bangalore South, Bangalore Central, Bangalore Rural, Hassan, Dakshin Kannada, Mysore, Chikkabalapur, Mandya, Tumkur, and Chamrajnagar. Voting for the other 14 seats of the state will be held on April 23.