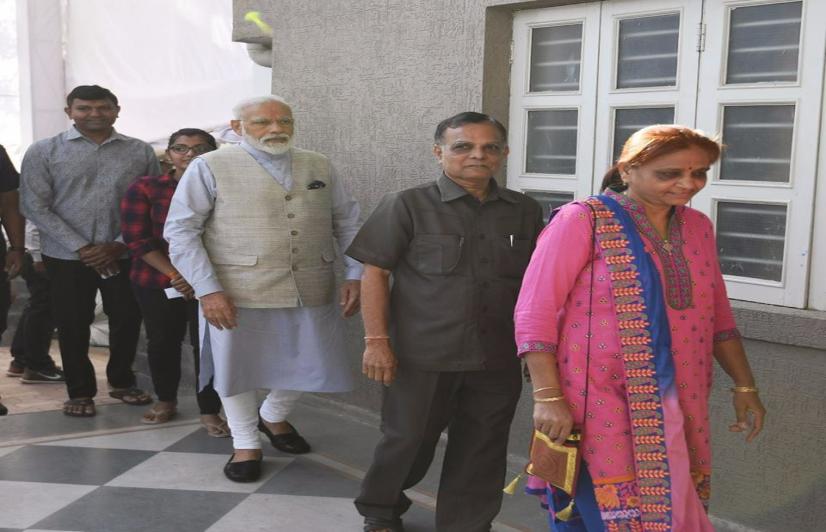 Gandhinagar: As the state of Gujarat went to polls on Tuesday in Phase 3 of the Lok Sabha elections, voters chose their representatives for the 26 Lok Sabha seats and four assembly seats where bye-polls were being held. Bye-polls were necessitated in four assembly segments due to the resignation of as many Congress MLAs in order to contest the general elections. Among the 371 MP and 45 MLA candidates whose political fates were sealed in the EVMs today, were BJP president and party candidate from Gandhinagar Amit Shah, four former union ministers, an incumbent minister of Gujarat and eight sitting MLAs of Gujarat, including the leader of Opposition in the state assembly. Gujarat is a BJP bastion, where the ruling party had won all 26 seats in the last general election in 2014 - up from 14 seats in 2009.

But this time around, observers predict that it would need a miracle and a 'sympathy wave' of sorts for compatriot PM Narendra Modi for BJP to get a full house again. It has a tough contest on its hand in some of the erstwhile traditional Congress seats including Banskantha, Anand, Surendranagar, Bardoli, Chhota Udepur and Amreli.

The polling percentage this time was recorded at 62.36 per cent till 7 pm. During the last Lok Sabha election, the state had recorded 63.9 per cent of voter turnout. In the first two hours of polling, the percentage registered was around 10 but voting sped up soon after, reaching 39.27 per cent by 1 pm. The voters continued to queue up despite the summer heat beating down on them; but in some booths which wore a deserted look, the heat seemed to have got the better of voters. The voting percentage was more than 58 per cent by 5 pm with one hour left for the close of polling.

Chief Minister Vijay Rupani expressed confidence that with the voting percentage likely to surpass the last time's figure the BJP would retain all the 26 seats in the state.

Water Resources Minister of Gujarat Parbat Patel is BJP candidate in Banaskantha, which recorded 64.08 per cent turnout. Congress has also fielded eight of its MLAs including Leader of Opposition Paresh Dhanani (Amreli) is in the fray. Congress MLA from Gandhinagar North seat C J Chavda has been made party candidate against BJP president Amit Shah for the Gandhinagar seat.

Polling began at 7 am in the morning and was by and large peaceful. There were a few complaints including those regarding violation of the Model Code of Conduct and also incidents of boycott of polling on few polling booths but no major incident took place. In a refreshing change, no major technical snags in the EVMs were reported.

In an incident at Manavadar in Junagadh LS seat, alleged aides of Gujarat minister Jawahar Chavda were not allowing people to vote. When the video surfaced of the men threatening to beat up people who were on their way to vote and turning them way, IGP (Law & Order) Narsimha Komar said, "This incident is from Junagadh. The police have filed FIR number 3108/ 2019 against three persons under 341, 171C, 504, 114 of IPC. Also under section 135A of Representation of People's Act, 1952. Police have arrested the main culprit who was in the vehicle i.e. Sanjay alias Badio, son of Dulabhai Solanki, a resident of Pradeep Khadia. The other two - Kishore Khant Darbar and one Ashok - are absconding.”

Many VVIP voters including PM Modi, Madhya Pradesh governor Anandiben Patel, Karnataka governor Vajubhai Vala, Gujarat governor O P Kohli, CM Vijay Rupani were among early voters. PM Modi cast his vote at Nishan School booth in Ranip area of Ahmedabad which falls under Gandhinagar LS seat. BJP president and party candidate Amit Shah was present near the booth to greet the PM, after which Shah proceeded to cast his vote at a booth in Naranpura with family. Other saffron celebrities who voted in Gujarat today were Arun Jaitley and L K Advani, who cast their votes in Ahmedabad city; PM Modi's nonagenarian mother Hiraba, whom he had met and sought blessings from in the morning prior to voting; and his estranged wife Jasodaben who voted in Unjha area in Mahesana.

Congress leader Hardik Patel, who cast his vote in Virmgam under Surendranagar constituency, expressed his disappointment with the slow pace of voting. With a low turnout a strong government could not be elected, he said. Billionaire industrialist Gautam Adani, a favourite target among the opposition for his alleged proximity to PM Modi, cast his vote in Ahmedabad under Gandhinagar constituency. He, along with wife Pritiben and other family members, queued up to wait for their turns to vote.

The Chief Electoral Officer S Murali Krishna said that a total of 51,851 booths were set up of which 17430 were in urban areas and remaining 34421 were for rural voters. Some of the rural booths were so remote that they barely had any electorates. Deep in the Gir forests, the sole voter in a booth in Banej, 62-year-old temple Mahant Dharamdas cast his vote to choose the MP of Junagadh. Over 40 voters on the remote Ajad island also participated in the democratic process.

The exact number of total voters including 26,693 service voters was 4,51,25,180 of which 2,16,96,571 were women and 990 transgenders. The number of first time voters aged between 18 to 19 years was 10,06,855. A total of 2,23,775 polling personnel including 57,111 presiding officers and over 5000 micro observers were deployed for polling operations. Sufficient police, para military and state reserve force were also deployed for free and fair conduct of polls, he said. The number of polling booths have increased by 6458 in comparison to the last general election in 2014.

The elections are being held after a rigorous two week long intense campaign in which PM Modi had addressed seven rallies while Congress president Rahul Gandhi had participated in four rallies. The contest in Gujarat like earlier times is likely to be mainly between BJP and Congress. The Chief Electoral Officer also said that no channel or other news medium could show any exit poll till the end of the last and seventh phase of election on May 19. Counting of votes will take place on May 23