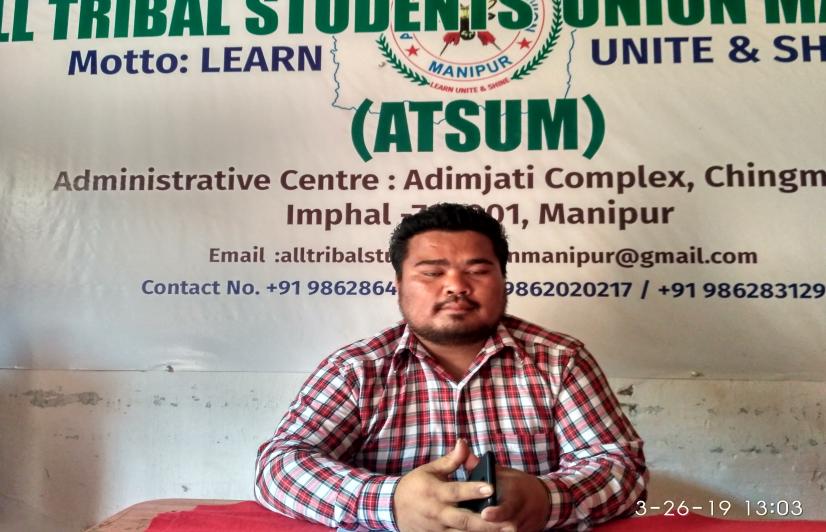 Meiteis seek ST status, Nagas believe their rights have been ‘infringed upon’

Imphal (Manipur): The Manipur People's (Protection) Bill, which primarily defines “Manipuris” and “non-Manipuris,” has divided electorate in this Northeastern state ahead of Lok Sabha polls.
Tension between different ethnic communities with “competing interests” and “overlapping claims” continue to simmer under the surface as the electorate decide whom to cast their vote for.
Protecting state's territorial integrity, demand for a schedule tribe status by some sections of the Meiteis and enactment of the Manipur People's Bill, passed by the Bharatiya Janata Party-led government in the State Legislative Assembly on 23rd July last year, are the major issues for the people of inner parliamentary seat, slated to go for polls on 18th April.
The Nagas and the Kukis are trying to “score brownie points” over each other by raking up contentious issues in Manipur's outer Lok Saba constituency, where polls would be held on 11th April.

The Manipur People's Bill
The Manipur People's Bill seeks regulation on the entry and exit into the state by outsiders and defines Manipuris as Meiteis, Meitei Pangals (Muslims), scheduled tribes and castes of the state listed under the Constitution and Indian citizens, who settled in Manipur before 1951 and their descendants. Those who don’t fall in these categories, according to the Bill, are “non-Manipuris” and are outsiders.
The outsiders visiting the state, according to the Bill, would have to obtain an Inner Line Permit, a system that is in place in three other North Eastern states: Arunachal Pradesh, Mizoram and Nagaland. But this Bill requires a nod from the President of India to become a law.

All stakeholders were taken on board
Former president of United Committee Manipur, Johnson Elangbam, who played a pivotal role in getting the Manipur People Bill passed by the Legislative Assembly, said: “There should not be any disunity as far as the Bill is concerned as all the stakeholders representing the sub-tribes under various ethnic nomenclature were duly consulted several times before passing the new Bill.”
"Considering the unprecedented negative response from the people in Churachandpur against the precursor bills which eventually lapsed after failing to receive the President's nod, we reached an understanding with the top leadership of United Naga Council and Kuki Inpi  to present the conscientious Bill with their full participation. The Bill was then referred to the Hill Area Committee for further consideration. Following that the Bill was tabled in the Assembly and passed," Elangbam said.
"There's no question of the Manipur People's Bill being unconstitutional as the framers of the Indian Constitution have put in place certain provisions under Article 19 where reasonable restrictions can be imposed on freedom of movement and residence within the country. The indigenous population of the state is on the cusp of being engulfed by both internal and external migrants. It's our last resort as internal migration cannot be allowed to overwhelm the state's native population and pose a threat to demography," he said.
It may be recalled that the passing of three precursor bills in 2015 pushed the entire state towards a precipice after nine protesters were killed while agitating against the “Manipur Regulation of Visitors, Tenants and Migrant Workers Bills and the Protection of Manipur Peoples Bill.”

State's territorial integrity non-negotiable
Kuki Inpi, Manipur (KIM), the apex body of the Kuki community in Manipur, still considers the Citizenship (Amendment) Bill as the biggest threat to the indigenous population in the state. It has asked people to remain cautious about the ramifications of the framework agreement signed between the Union government and National Socialist Council of Nagaland (IM) in 2015. The contents of the agreement have been kept under wraps so far with many student and civil society organisations demanding its disclosure every now and then for the past few years.

The general secretary of KIM Solun Mate said, “The KIM stands with United Council, Manipur and All Manipur United Club Organisation on issue of the state's territorial integrity which is non-negotiable. We don't have any objection to the Manipur People's Bill which is pending the President's assent. We do not have anything to say on those with vested interests opposing the Bill on mere assumptions. There's no question of opposing the Bill as the government had left the door wide open for reviewing the Bill if there were any objections."

All Tribal Students' Union of Manipur (ATSUM) remains divided on the issue as some leaders support it while others oppose it vehemently.

The ATSUM president, Vareiyo Shatshang, said that the government inserted some clauses such as the Deputy Commissioner becoming the sole authority by superseding the Manipur Autonomous District Council Act which is objectionable.

Selboi Haokip, general secretary of the same tribal students' body, said, “The new bill has been passed with the consensus of all civil society organisations and the students' body has no objection to it.”
He said that All Naga Students' Association of Manipur had put some remarks on the Bill. “Other than that there is no opposition against the bill from any quarter," Haokip observed.

A prominent Naga leader said the United Naga Council (UNC) endorses ATSUM's position on the Bill. However, it raised questions on which among the two opinions, UNC endorses.

"We have managed to achieve a relatively peaceful atmosphere in the past two years where there is communal harmony, no economic blockades and internal conflict. Let this peace prevail and give it a chance," the Naga leader said.

The president of All Naga Students Association of Manipur (ANSAM), Joseph Adani, said the Nagas strongly oppose the Manipur People Bill as it “infringes their rights” specially their land.

"The Bill was purportedly signed for protecting the scheduled tribes but we have examined the Bill and it has nothing to do with the protection of the tribal people," Adani stressed.
He also disclosed that ANSAM has submitted a memorandum to President Ram Nath Kovind against the bill. “We have also written a letter to Manipur Governor Najma Heptulla for withholding the bill,” he added.

Meanwhile, Schedule Tribe Demand Committee (STDC), Manipur since 2014 has been pressing for ST status to Meiteis, the Valley-based community comprising over 40 percent of the state's total population.
Earlier this month, the committee imposed a 36-hour general strike to mount pressure on the state government to send recommendation to the Central government for including the community in the scheduled tribe list under the Indian Constitution.

STDC's general secretary, Keithellakpam Bhogendrajit, said, "We have made it known to all the political parties to come clean on their stance on this demand. We are waiting for the elections to conclude and we will continue with our movement for a scheduled tribe status for the Meiteis,"

Bhogendrajit said the Manipur People Bill if it receives the President's assent will be good for all the ethnic communities. But he was quick to add, “The Bill has been tampered with. It no longer even mentions protection.”

On the other hand, Meitei Pangals which have over one lakh voters in the inner seat and around 40,000 voters in the outer parliamentary seat support the Manipur People Bill.

All Manipur Muslims Organisation Coordinating Committee's president SM Jalal Sheikh said Meitei Pangals support the Manipur People Bill and do not have any issues even if the base year is kept at 1901, 1921 or 1951.

On the demand for a Schedule Tribe status by the majority Meiteis, Sheikh said all the indigenous communities including the Meitei Pangals should be included under the Schedule Tribe list.